Member of the Privy Council, Governor of Raab 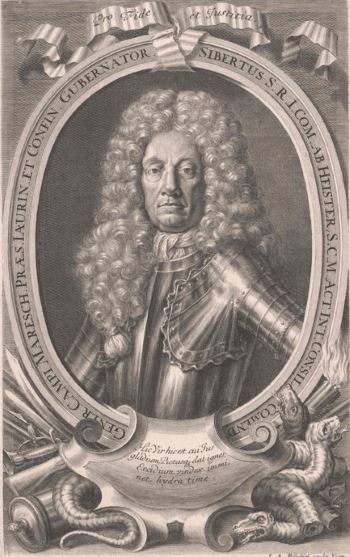 Portrait of Sigbert Count Heister – Source: copperplate after a picture of Pfeffel

Sigbert was born in 1646 in an Austrian aristocratic family. His parents were Gottfried Baron von Heister, vice-president of the Hofkriegsrat (Court War Council) and Countess von Virmond.

In 1665, Heister joined the Imperial Army and fought against France.

On 6 July 1678, Heister was wounded at the Battle of Rheinfelden.

In 1682, Heister was promoted to colonel and received a patent authorising him to raise an infantry regiment of 2,000 men (disbanded 1748).

In 1683, half of Heister's Regiment took part in the defence of Vienna against the Turks. During siege, Heister was wounded several times.

In 1686, Heister was promoted to General-Feldwachtmeister (GFWM) and fought in Hungary.

On 11 September 1697, during the Battle of Zenta, Heister was wounded once more.

In 1703, Heister became commander of the Imperial forces campaigning in Hungary against Rákoczy's rebels. On 26 December, Heister defeated the rebels at Tyrnau (present-day Trnava/SK).

For the campaign of 1705, Heister was transferred to the Italian theatre of operation.

Heister was later transferred to the Rhine.

In 1707, Heister was attached to the Reichsarmee. Some quarrels between him and the Margrave of Bayreuth caused his transfer to Hungary where he was promoted to Field-Marshal (FM) and assumed command of the Imperial army operating in Hungary. Due to his reputation, Tsar Peter I tried to persuade Heister to take service in the Russian Army, offering him an annual salary of 100,000 talers, but Heister declined his offer.

In 1716, at the beginning of a new war against the Turks, Heister fought under the command of Prince Eugène de Savoie. However, FM Heister retired before the end of the war and returned to his estates of Kirchberg in Styria where he died on 22 February 1718 at the age of 72 years.

His brother Hannibal reached the rank of major-general (GFWM) and was Governor of Croatia where he died in 1719.

Sigbert Count Heister married four times. His wives were Countess von Zinzendorf, Lamberg, Gera and Katzianer. Heister was not popular among other generals. He had problems to cooperate and was very distrustful. He was pitiless against his opponents.

Rudolf, his son from his first marriage, became colonel in his father's regiment and was killed in 1717 in the Battle of Belgrade.