This regiment was raised in Lower Austria in accordance with a patent dated 15 March 1683. Two hundred men of the Saurau Dragoons, along with 100 men from each of the dragoon regiments Schulz, Castell and Kuffstein constituted the kernel of this new regiment.

In 1683, during the Great Turkish War (1683–1699) the regiment took part in the battle on Bisamberg, in the relief of Vienna and in the combat at Parkány. From 1685 to 1687, it served in Inner Austria and saw no action. In 1688, it campaigned in Transylvania and suffered severe losses in the battle of Tohány. In 1691, the regiment received 500 men contributed by the Landschaftsdrasgoner (dragoon militia) of Lower Austria. In 1692, it took part in the siege of Grosswardein. In 1694, it once more served in Transylavania, and fought under the command of FML Veterani.

In 1702, the regiment took part in the campaign in Northern Italy. On 26 July, it fought in the Combat of Santa Vittoria. On 15 August, it took part in the Battle of Luzzara, where it initially formed part of the rearguard. At the beginning of the battle, the Prince of Vaudémont formed a flank to his left with several cavalry units, including the present regiment.

In 1703, the regiment took part in the campaign in Northern Italy and in South Tyrol.

In 1704, the regiment took part in the campaign in Lombardy.

In 1705, the regiment formed part of the army of Prince Eugène. On 16 August, it fought in the Battle of Cassano, where it was deployed on the extreme right wing of the first line, under Major-General Prince von Lothringen.

In August 1706, the regiment took part in an action near Piacenza. On 7 September, it fought in the decisive Battle of Turin.

In 1707, the regiment took part in the campaign in Provence and, in August, was present at the 1707 – Siege of Toulon.

On 27 July 1710, the regiment took part in the Battle of Almenar, where three of its squadrons were deployed in Major-General Galves’ brigade on the right wing of the first line. On 20 August, it supposedly fought in the Battle of Saragossa, but we can find no trace of this unit in the order of battle. On 10 December, it was at the disastrous Combat of Villaviciosa. 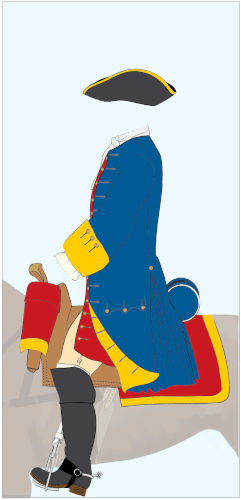 Uniforms of officers differed from those of the privates and NCOs by the finer material used and by the following distinctions:

Drummers were dressed according to the regiment owner's tastes. They often wore brightly coloured uniforms with:

From 1657 to 1705, all Austrian (Imperial) dragoon regiments carried the same white Leibstandarte (colonel standard). It was fringed in gold and, on both sides, the border was decorated with a golden floral pattern: