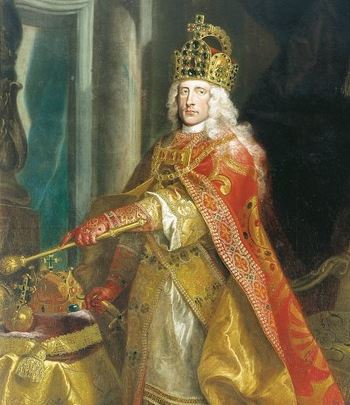 Detail of a portrait of Emperor Joseph I by Johann Rudolf Huber- Source: Wikimedia Commons

Joseph was the elder son of Emperor Leopold I and his third wife, Eleanor Magdalen, Countess Palatine, daughter of Philip William of Neuburg.

In 1687, Joseph received the crown of Hungary.

In 1699, Joseph married Wilhelmina Amalia, daughter of Duke Frederick of Brunswick-Luneburg, by whom he had two daughters.

In 1702, on the outbreak of the War of the Spanish Succession, Joseph saw his only military service when he joined the Imperial General Louis of Baden in the Siege of Landau. It is said that when he was advised not to go into a place of danger he replied that those who were afraid might retire.

In 1705, Joseph succeeded his father as Emperor of the Holy Roman Empire as "Joseph I". It was his good fortune to govern the Austrian dominions, and to be head of the Empire during the years in which his trusted General Prince Eugène, either acting alone in Italy or with the Duke of Marlborough in Germany and Flanders, was beating the armies of Louis XIV.

During the whole of Joseph's reign, Hungary was disturbed by the conflict with Francis II Rákóczi, who eventually took refuge in France. The emperor did not himself take the field against the rebels, but he is entitled to a large share of the credit for the restoration of his authority. He reversed many of the pedantically authoritative measures of his father, thus placating all opponents who could be pacified, and he fought stoutly for what he believed to be his rights.

Joseph showed himself very independent towards the pope, and hostile to the Jesuits, by whom his father had been much influenced. He had the tastes for art and music which were almost hereditary in his family, and was an active hunter. He began the attempts to settle the question of the Austrian inheritance by a pragmatic sanction, which were continued by his brother Charles VI.