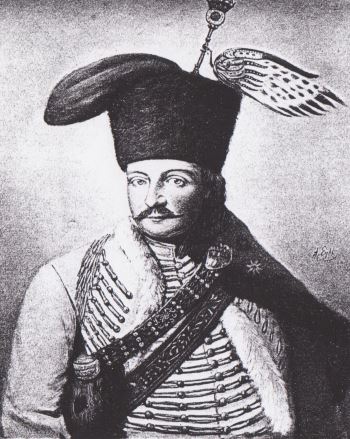 Sándor was the son of Baron Lászlo (Ladislaus) Károlyi , governor of the Komitat (county) of Szatmár.

In 1703, in the early days of Rákoczy's Uprising, Sándor Károlyi fought the rebels at Dolha. Despite this victory, Károlyi fell into disgrace in Vienna. After his return to Hungary, he joined Rákoczy's rebels and was appointed as one of their commanders. He was not as violent as Bercsényi and tried to arrive at a peace settlement as soon as possible.

On 20 March 1704, Field Marshal Heister's Imperial Corps (2,000 foot, 2,400 horse and 17 guns) surprised Károlyi (approx. 10,000 rebels) at Kis-Márton (present-day Eisenstadt/AT). Heister defeated the rebels who lost 2,000 men and 200 wagons. However, Károlyi with 4,000 horse managed to escape behind the Raab River. At the end of October, Károlyi along with Nikolaus Bercsényi, a French secretary and a representative of Bavaria vainly tried to negotiate an armistice with the Imperialists.

At the beginning of 1705, Károlyi conducted a raid in Austria, reaching the suburbs of Vienna.

In 1708, Károlyi with his 16,000 men could not hold his ground in Transylvania against the Imperial troops commanded by GFWM Georg von Kriechbaum and was forced to retreat.

In 1711, Sándor Károlyi was instrumental in the signature of the Treaty of Szatmár on 29 April.

In 1723, Count Károlyi was appointed councillor and general of cavalry (G.d.C) .

In 1734, Count Károlyi raised a new hussar regiment at his own expense.

Count Károlyi died on 8 September 1743. His son Franz (Ferencz) followed him as proprietor of his hussar regiment and, as his father, reached the rank of general of cavalry.

N.B.: the texts on the period extending from 1701 to 1709 are mostly derived from our articles depicting the various campaigns, battles and sieges.