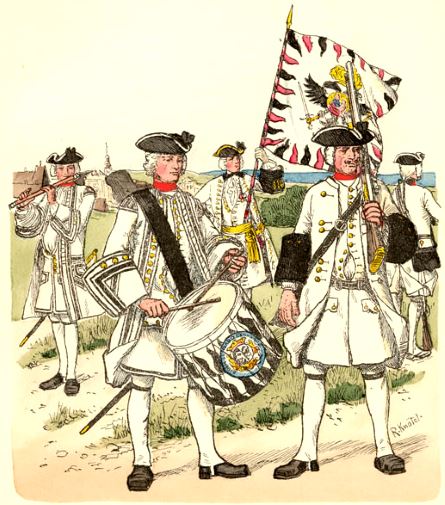 The regiment was raised in 1689, at the beginning of the Nine Years' War (1688–97), by Duke Albrecht III von Sachsen-Coburg, who had been granted the necessary patent from Emperor Leopold I on 9 December 1688. It initially consisted of 10 companies for a total of 1,500 men, including staff. In May 1689, the newly raised regiment was sent to Frankfurt am Main. From 30 June, it garrisoned Cochem. The regiment was not yet at its full theoretical strength, counting only 5 companies. It took it winter-quarters in Swabia. At the end of July 1690, it was sent from Heilbronn to Italy by Beilstein, Schorndorf, Adelberg, Geppingen, Blaubeuern on the Danube, then by Memmingen, Kempten and Reutte in Tyrol. Two companies which garrisoned Nuremberg were transported to Burgau on the Danube River. In September, the whole regiment reached Piedmont. By 23 May 1691, the regiment counted 700 men. In July, it had been increased to 958 men and was serving under General Palffy in the region of Pinerolo. In August, three additional companies (274 men) arrived from Germany. In September, the regiment took part in the siege of Carmagnola which surrendered on 8 October. In 1692, Palffy's Corps remained in Piedmont to observe enemy forces. However, it is also possible that some companies had taken part in the campaign in Dauphiné. In 1693, the regiment, as part of the troops of the Duke of Savoy, besieged Fort Brigitta, which surrendered on 13 August. In July 1694, the regiment, who now counted 16 companies, operated in the region of Moncalieri and Rivalta, then in the area of Scalenghe and Araisca. In 1695, it was brought back to its theoretical strength of 1,500 men. It took part in the siege of Casale before being transferred to Catalonia in July. By May 1696, the regiment was encamped near Barcelona. On May 30, it fought in the engagement of Massanet de la Selva before retiring to its camp near Barcelona. In 1697, it took part in the defence of Barcelona which surrendered on 10 August. It left the city with the honour of war and joined the Spanish army near Tarragona.

By 1698, the regiment, which was still stationed in Catalonia, consisted of 12 companies and totalled 1,800 men. On 7 August 1699, Colonel Karl Sebastian von Kratze became Inhaber of the regiment.

Since its creation, the regiment had the following proprietors (they also acted as effective commanders):

In 1769, when the Imperial regiments were officially ranked and numbered, the present regiment was designated as No. 57.

In July 1702, the regiment (two battalions) joined Arco's Corps and, on 14 October, took part in the Battle of Friedlingen. It then assumed garrison duty in Alt-Breisach.

From 22 August 1703, the regiment (14 companies) took part in the defence of Alt-Breisach which surrendered on September 6. The garrison obtained the honours of war when the fortress capitulated and marched under escort to Rheinfeld which it reached on 15 September. Describing the situation in the besieged Fortress of Alt-Breisach, Colonel Marsigli wrote:

In August 1704, the regiment received 2.200 recruits from Bavaria which brought its strength to 17 companies in 4 battalions. On October 20, Philipp Damian Baron von Sickingen (formerly colonel and commander of Thürheim Infantry) became Inhaber of the regiment.

In 1705, the regiment initially garrisoned places in Bavaria (Braunau, Schärding, and its grenadiers in Munich) before being transferred to Hungary to quench the Rákóczi Uprising.

From 1706, the regiment served in Hungary against Rákóczi, but saw no action.

At the beginning of 1707, the regiment operated in the region between Lack and Sarvar. At the end of May, it was with Field-Marshal Starhemberg at Pressburg (present-day Bratislava).

On 3 August 1708, Rákóczi's Confederate force was decisively defeated in the Battle of Trentschin (present-day Trenčín). The regiment (about 2,180 men in 16 fusilier coys and 1 grenadier coy) took its winter-quarters near Silein (present-day Žilina/SK) in the Comitat of Trentschin.

On 22 January 1710, the regiment fought in the engagement of Romhány. FML Baron Sickingen with his small force of 2,500 men defeated the 12,000 men of Rákóczi and Károlyi. In this action, the Kurucs lost 2,000 men killed, and 27 colours and 2 guns captured. At the end of September, it took part in the siege and capture of Neuhäusel (present-day Nové Zámky/SK). A detachment of the regiment then blockaded the Castle of Murany (present-day Muráň/SK).

On 21 February 1711, Rákóczi took refuge in Poland. The same year, the regiment was initially posted at Debreczin (present-day Debrecen). It then moved to N. Kalo, Szoboslo (present-day Szobosló/HU) and Kaschau (present-day Košice/SK) before being sent to Transylvania.

In 1712 and 1713, the regiment remained in Hungary and Transylvania. On November 26 1713, Johann Hannibal Baron von Wellenstein became Inhaber of the regiment.

In this section, we depict the uniform worn by the regiment in 1717 when the regiment belonged to Count Brown. The distinctive of the regiment seems to have remained constant since its creation. 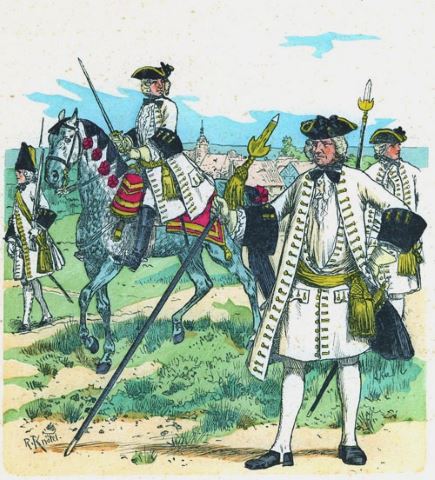 Uniforms of officers were always of finer cloth than those of the privates. They were also distinguished from the uniforms of privates by the following differences:

Drummers and fifers wore similar uniforms with the following distinctions:

The colour illustrated by Knötel (see plate above) is similar to the Leibfahne of the regiment during the War of the Spanish Succession. The Regimentsfahne had the same border and the same centre device but its field was red.

Michael Zahn for information about this regiment

Harald Skala for the translation and integrattion of Pillersdorf’s work