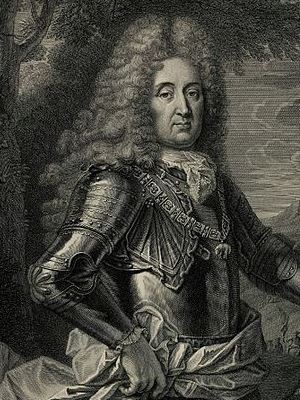 Charles Henri was born in 1649 as the third son of Charles IV Duke of Lorraine and Béatrix de Cusance.

The duke gave to Charles Henri a small principality in Lorraine who was raised to be count and then prince of Vaudémont.

On 27 April 1669, Charles Henri married one of his cousin, Anne-Élisabeth d'Elbeuf.

In 1670, Anne-Élisabeth gave birth to a son: Charles-Thomas Prince de Commercy who would later (1701-1704) serve in the Imperialist Army as as colonel of a cuirassier regiment under Prince Eugène de Savoie in Northern Italy.

Charles Henri served in the Spanish Army against France.

In 1675, Charles Henri was received as Knight of the Order of the Golden Fleece.

During the Nine Years' War, Charles Henri served in the Allied army in Flanders under William III of England.

In 1698, Charles Henri was appointed Governor of the Duchy of Milan.

At the end of 1700, when Philippe Duc d'Anjou was proclaimed King of Spain as Philip V, Charles Henri remained loyal to the new king. Emperor Leopold I invited Charles Henri to receive Imperial troops in Milan but the latter refused. King Louis XIV, informed of the assembly of an Imperialist army and knowing that the Prince of Vaudémont had not enough troops to defend the Duchy of Milan, decided to send him 40 bns and 56 sqns under the Lieutenant-General Comte de Tessé.

On 11 March 1701, the Prince de Vaudémont and the Comte de Tessé sent a courier to Venice to receive guarantees that the republic would remain neutral and would defend the passages in its territory to Imperialist troops. Vaudémont and Tessé, with the authorisation of the Republic of Venice, then inspected the course of the Adige up to Fort Croara and reconnoitred all passages between the Adige and Lake Garda. After their reconnaissance, they deployed their troops on the Mincio and then returned to Milan where they arrived on 30 March. On 10 April, the Prince of Vaudémont promised to reinforce the French army with 7 Spanish battalions at the end of the month. In mid-May, he prepared a train of 24 Spanish field pieces at Cremona. At the end of May, Marshal Catinant and the Prince de Vaudémont were completely surprised when Prince Eugène de Savoie passed the Alps with an Imperialist army, for they had counted upon Venetian neutrality. At the beginning of August, Vaudémont and Tessé were sent to Cremona and Milan to quell any uprising and to assemble the last troops arriving from France on the Adda. Vaudémont, fearing an invasion of the Duchy of Milan, distributed his meagre forces in Lodi, Cremona and Pizzighettone. He also sent the Piemontese artillery to Lodi. Vaudémont was concerned by the possibility that the Imperialists could launch incursions into the Duchy of Milan from Palazzolo and by the unrest of its population mostly favourable to the Habsburg. On 5 October, Vaudémont received a request for assistance from the Viceroy of Naples to contain an uprising. He sent him 10 Spanish cavalry companies, soon followed by 1 Spanish battalion.

In January 1702, in preparation for the next campaign, Vaudémont built a bridge on the Po at Valenza and another one on the Ticino near Pavia. On 24 January, he received the Marshal de Villeroy at Milan to discuss of the coming operations. On 1 February, when Villeroy was captured at Cremona, the overall command of the Franco-Spanish army fell to the Prince de Vaudémont until a new French commander would be sent from Versailles. Vaudémont tightened up the positions of the Franco-Spanish army to protect the Lower Oglio. On 6 February, accompanied by M. d'Albergotti, Vaudémont left Milan for Cremona where the main body of his army was posted. He redistributed his forces to strengthen his positions along the Adda and the Po with his right at Pizzighettone and his left at Lodi. On 18 February, Marshal Vendôme arrived at Milan where he replaced the Prince de Vaudémont as commander-in-chief of the Franco-Spanish army. At the end of May, Vaudémont assembled a Spanish corps (5 bns, 12 sqns) near Cremona to threaten the Imperialists positions at Brescello and their bridgehead at Borgoforte. In June, when King Phlip V arrived in Italy, Vaudémont received him in Milan. On 1 July the marched together to join the army. While the King of Spain and Vendôme launched an offensive on the right bank of the Po, Vaudémont commanded the army who remained on the left bank to defend the Duchy of Mantua. In mid-August, tt was decided to transfer all of Vaudémont's army to the right bank of the Po where it would undertake to turn the left of Eugène's army. On 21 August, Vaudémont along with M. de Saint-Frémont, most of his staff and 34 guns went to the king's camp at Luzzara. At the end of August, Vaudémont was entrusted with the siege of Guastalla which surrendered on 9 September. On October 2, King Philip V left the army at Luzzara, accompanied by the Prince de Vaudémont, and marched towards Milan where he arrived on 6 October. The king sailed for Spain in the first days of November.

In 1704, at the death of his son, the Prince de Commercy, Charles Henri renounced to his principality in Lorraine.

In 1708, Duke Leopold of Lorraine gave the Principality of Commercy to Charles Henri.

In 1723, Charles Henri died without descendant and his principality returned to the Duke of Lorraine.