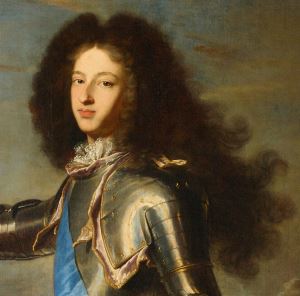 Louis de France, Duc de Bourgogne in 1704 – Source: Detail of a painting made by Hyacinthe Rigaud published in Wikimedia Commons

During his youth, Louis showed a rather fiery and arrogant nature. However, Fénélon his tutor made him a very devout person.

At the beginning of the War of the Spanish Succession, in 1702, Louis was admitted to the Great Council of Louis XIV. On 11 March, appointed the Duc de Bourgogne as commander-in-chief of his Army of Flanders. He would be seconded by Maréchal Boufflers. On 25 April, the Duc de Bourgogne left Versailles and went to Péronne on his way to Flanders. On 26 April, he reached Mons. On 27 April, he arrived at Bruxelles where he sojourned for a few days. On 3 May, he finally arrived at Boufflers' camp at Xanten where he immediately inspected his new army. On 11 June, his army forced the Allies to abandon their camp at Kranenburg and to precipitously retire to Nijmegen. On 26 July, Marlborough's army passed the Meuse on three bridges near Grave, thus threatening the communications of the Duc de Bourgogne's army with the Spanish Netherlands. From 27 July, the Duc de Bourgogne gradually retired to Tegelen and Roermond where he passed the Meuse, continuing his retreat to Bree and Hasselt and taking refuge behind the Lines of Brabant on 3 August. The Allies then launched an offensive in the Low Countries. The situation getting critical, the Duc de Bourgogne was recalled to Versailles, leaving Boufflers in command of the Army of Flanders. The Duc de Bourgogne left the army on 6 September and arrived at Versailles on 8 September.

In 1708, Louis campaigned in Flanders, seconded by the Duc de Vendôme. On 11 July, he was defeated by the Duke of Marlborough and Prince Eugène de Savoie in the Battle of Oudenarde.

In 1711, at the death of his father, Louis de France became Dauphin de France (Hereditary Prince of France).

Between 12 and 18 February 1712, Marie-Adélaïde de Savoie (Louis' wife) and Louis contracted measles and died. On 8 March, their elder son, the Duc de Bretagne, died of the same disease.

N.B.: the section describing the Duc de Bourgogne's service in 1702 is mostly derived from our articles depicting the various campaigns, battles and sieges.