The regiment was created by a royal decree issued on 17 June 1703, as the Regimiento de dragones irlandeses”. On 17 December 1703, the regiment was reviewed for the first time. On 26 January 1704, Daniel O'Mahony1 was appointed colonel of the regiment who took his name. By 4 March 1704, the regiment had completed its recruitmen among Irishmen exiled during the Nine Years' War (1688–97).

In 1715, the regiment became “Edimburgo Dragones”.

In March 1704, now complete, the regiment was sent to the Estremadura.

In 1706, the regiment was at the siege of Alicante and at the defence of Cartagena.

In 1707, the regiment took part in the campaign in Portugal. On 25 April, it fought in the Battle of Almansa and later in an action at Alzira.

In January 1708, the regiment took part in the defence of Alcoy.

In 1710, the regiment took part in an action near Talavera. On 20 August, it fought in the Battle of Saragossa. 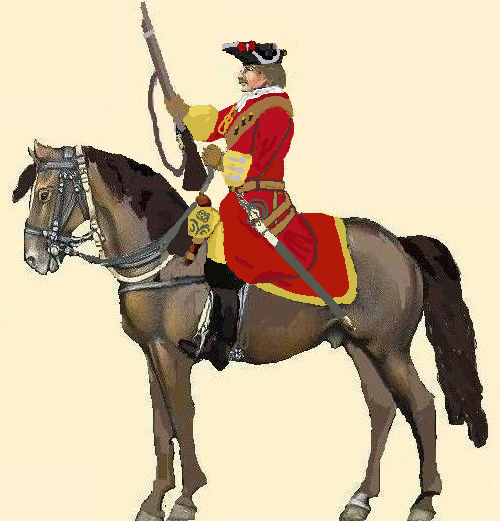 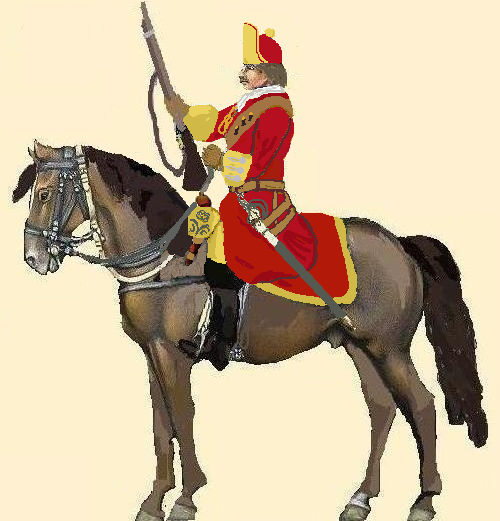 All Irish dragoon regiments in the Spanish service carried the same generic Colonela Guidon depicted below.

Ordonnance guidons: 4 crimson guidons made of satin and embroidered in silver and gold; the arms of Spain on one side and the regimental badge on the other.

1 Daniel O'Mahony was born in Dermond. In 1689, it left for France where he served as major in Dillon Regiment. On 1 February 1702, it distinguished himself during the failed storming of Cremona by the Imperialists. He later accompanied King Philip V when he returned to Spain. In 1706, Mahony became count. In 1707, he was promoted to major-general and as such commanded the Spanish army operating in Sicily. In 1708, Mahony was promoted to lieutenant-general. He died on 2 January 1714.