Since 1282, when Peter III of Aragon was crowned King of Sicily, the Spanish interests in the Italian peninsula made necessary the presence of armed forces. Most of these forces were nominally “Spanish troops”of mixed composition. In some cases, “Italian” units were created, when nobility and people sided for the Kings of Aragon.

In 1443, Alphonse V entered into Naples, which passed under the crown of Aragon as an ecclesiastic fief. From this moment, Spaniards and Italian fought many time together against France.

Fighting culminated in the so called “Italian Wars”. At the siege of Atella, there were many Italian troops serving under the Spanish commander Gonzalo Fernandez de Cordoba, the so-called “El Gran Capitan”, one of the fathers of the tercio. Neapolitan cavalry and the Calabrian infantry performed well. From that time thousands of Italians went to war under the banners of Castille and Aragon (already united under a Catholic King) for Spanish interest. In 1512 for example, one half of the Spanish army, who took part in the Battle of Ravenna, was composed of Italian soldiers.

The Milan Cavalry Regiment was raised in Lombardy in June 1661 when several horse companies from Piedmont and Lombardy were united to form the “Trozo de Caballeria de Milan”. For about a century the regiment bore the name of “Milan”.

Immediately after its creation in 1661, the unit was sent to the port of Finale where it embarked for Cádiz. It then sailed on the Guadalquivir to Sevilla. It then marched from this city to the Province of Extremadura where it joined the army of Don Juan of Austria and covered the siege of Alconchel. In 1662, it took part in the action of Estremoz and in the siege of Borba; in 1663, in the siege of Evora and in the Battle of Ameixial; in 1665, in the Battle of Montes Claros; in 1667, in the relief of Albuquerque.

In 1674, the unit was sent to Catalonia to fight against the French. In 1675, it campaigned in Roussillon. In 1677, it took part in the action on the Espolla and in 1678, in the unsuccessful attempt to relieve Puigcerdá.

In 1684, the unit successfully defended Gerona.

At the beginning of the War of the Spanish Succession, the regiment counted 4 squadrons. More precisely:

On 28 February 1704, this cavalry tercio was reorganised as a cavalry regiment of 12 companies.

In 1705, when the Portuguese General Das Minas tried to outflank the Spanish positions near Monsanto, the regiment, assisted by Reina Cavalry and Edimburgo Dragoons, valiantly held its position.

In 1706, the regiment was assigned to the Army of New Castile which it joined at the camp of Atienza where it was deployed on the left of the second line. After a series of strategic manoeuvres, the Spaniards forced Archduke Charles to retire to the provinces of Valencia and Murcia.

On 25 April 1707, the regiment fought in the Battle of Almansa. It also took part in the capture of Lérida. On November 30, the regiment integrated the former Regiment of the Marquis of Valdefuentes, another cavalry regiment made of troopers recruited in Lombardy.

In 1708, the regiment was at the siege of Tortosa. On 17and June, it took part in combats to drive back sorties of the garrison.

In 1709, the regiment was attached to the corps of General Pons de Mendoza who roamed the County of Rivagorza to contain the Catalan insurgents. Six Austrian regiments were guarding the bridge of Montañana. Mendoza at the head of a column of cavalry (including the present regiment) advanced from Tolva. On 1 August, Mendoza crossed the Noguera and, at dawn, attacked the Austrian camp and completely routed the enemy who lost 700 men killed or taken prisoners, 6 standards and all their baggage.

In 1710, when the Allies received reinforcements, the Spaniards were forced to retire to Aragon. During this retreat, on 27 July, the regiment fought in the Battle of Almenar and, on 20 August, in the disastrous Battle of Saragossa. The army then took refuge in Old Castile and reorganised in the Province of Extremadura.

In 1711, the regiment was attached to the Army of Aragon where it was posted on the left of the first line. This army entered into Catalonia and campaigned around Balaguer and Calaf.

In 1712, the regiment campaigned in Catalonia.

In 1713, the regiment took part in the blockade of Barcelona.

In 1714, the regiment took part in the siege and capture of Barcelona. 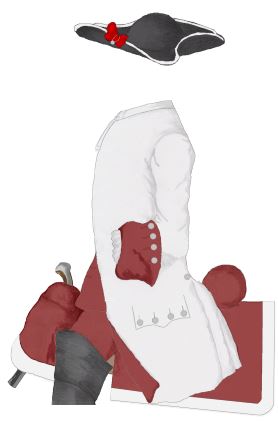 According to a regulation issued in 1638, each squadron carried a standard made of damask.

Dr. Marco Pagan (Rome) and Jean-Pierre Loriot for the initial version of this article.