This regiment was raised on 4 May 1694 in the Canton of Bern by Niklaus Tscharner for the Dutch service. In January 1693, Tscharner had been promoted to brigadier in the Dutch Army.

In 1697, Niklaus Tscharner raised a new regiment (Tscharner Infantry) and ceded the present regiment to Jean-Louis Charles de Montmollin, who was previously serving as lieutenant-colonel in Muralt Infantry.

Upon joining the Dutch service, the regiment consisted of 2 battalions, for a total of 1,700 men. It was later increased to 2,000 men in 2 battalions (each of 5 companies of 200 men) from Bern, Neuenburg, Schaffhausen, Appenzell and Ausserhoden.

N. B.: the biographies of Jean-Louis Charles de Montmollin and of his brother, François de Montmollin (a lieutenant-colonel, who died on 22 September 1704 from wounds received in combat at Donauworth) are often mixed up. Furthermore, the Dutch often wrote their names as “Montmoulin.”

In April and May 1703, the regiment took part in the Siege of Bonn. It later participated in the attack on the Waas Lines.

In 1704, the regiment accompanied the Duke of Marlborough in his march to the Danube. On 2 July, it was at the Battle of Schellenberg; and on 13 August, it fought in the famous Battle of Blenheim. From October to December, it was at the blockade, siege and capture of Trarbach.

In 1709, the regiment took part in the siege of Tournai. On 11 September, it fought in the Battle of Malplaquet, where its colonel was wounded once more.

In 1710, the regiment took part in the Siege of Douai, Béthune, Saint-Venant and Aire-sur-Lys.

From August to September 1711, the regiment took part in the Siege of Bouchain.

In 1712, the regiment (8 companies) took part in the defence of Le Quesnoy, where he had to surrender as prisoners of war on 4 October.

The uniform was blue with red as the distinctive colour, but we do not know more details. Here we assume that it was similar to the uniform of Tscharner Infantry.

Armaments consisted of a musket and a bayonet; and a sword.

Officers wore a uniform similar to the one of the rank and file but of a better quality. 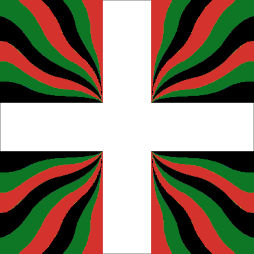 Jean-Louis Vial for the initial version of this article