The regiment was raised in Andalusia on 31 January 1703 by Baltasar de Moscoso at his own expense. It was first reviewed at Santa Maria, near Cádiz, on 4 May 1703.

In 1704, the regiment went from the harbour of Santa Maria to Sevilla. Shortly afterwards, it was sent to Badajoz and took part in the invasion of Portugal. It made itself master of the town of Alegrete, occupied by 600 Portuguese. It then took part in the capture of Portalegre, crossed the Tagus at Vila Velha de Rodão and attacked the Allies at Monsanto. At the end of the campaign, the regiment was placed in garrison at Badajoz. In December, it was transferred to Almendral and from there to the vicinity of Olivenza where it ambushed a convoy arriving from Juromenha which was escorted by 300 horse and 100 foot. It routed the escort and captured 500 carts and 200 prisoners. It also defeated a detachment sent from Olivenza to the relief of the convoy, taking its commander prisoner along with three captains and 30 cavalrymen. It then returned to Badajoz.

In 1705, the regiment continued to serve with the Army of Extremadura under the command of the Duc de Berwick. In March, the regiment received orders to march north to the vicinity of Ciudad Rodrigo. When, the army reached Zamora, it realised that the Allies had already reached the Águeda River. The regiment took position on a height on the right flank of the Allies. After the retreat to Ciudad Rodrigo, it encamped on the right of the first line. During the retreat to Badajoz, it surprised two Portuguese detachments in the villages of Aldeia da Venda and Vila Viçosa and took prisoners an entire battalion and a squadron. The regiment then rejoined the Army of Extremadura. On 2 October, when the Allies laid siege to Badajoz, the regiment was at Lobon. It was charges to guard one of the fords of the Guadiana. It finally crossed that ford and forces the enemy to raise the siege.

In the night of 16 February 1706, the regiment suddenly set off from Badajoz and surprised an enemy detachment in the suburb of Albuquerque, capturing two companies of cavalry. After taking part in the bombardment of Elvas, the regiment was sent to reinforce Jeréz.

In mid-July 1707, the regiment took part in the blockade of Olivenza. On 23 July, after the capture of Moura, it was charged to escort a convoy destined to this place. It then took part in the siege and recapture of Ciudad Rodrigo.

In May 1708, the regiment was part of a column who dislodged the Allies from Jeréz de Caballeros. In mid-October, it was sent to the camp of Almendral where it attacked a Portuguese detachment, killing 19 men. In December, it made a sortie from Badajoz and engaged an Allied detachment, capturing the commander and three officers and some 3,000 heads of cattle.

In March 1709, the regiment made a reconnaissance towards Moura. On 7 May, it took part in the Battle of La Gudina. On 24 October, it marched from the camp of Talavera la Real towards Portugal, crossed the border near Barbacena and Santa Eulália, returning unmolested the same day with 3,000 heads of cattle to bivouac between Estremoz and Vila Viçosa.

In 1712, the regiment was allocated to the Army of Extremadura. On 17 June, it was detached to intercept a convoy heading for Campo Maior.

After the war, the regiment took up quarters in the Province of Extremadura.

Very little is known about the uniform of this regiment to the exception that the uniform was white with red as its distinctive colour. We don't know the metal colour of the regiment. 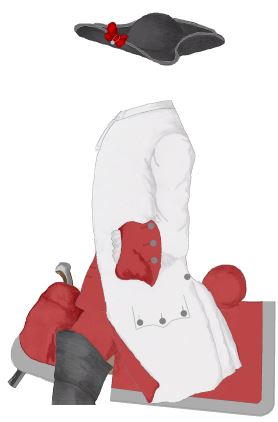