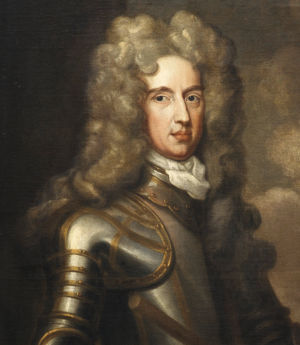 Detail of a portrait of Hendrik van Nassau-Ouwerkerk circa 1700 by Godfrey Kneller – Source: Wikimedia Commons

Hendrik was born on 16 December 1640 in The Hague. He was the son of Lodewijk van Nassau-Beverweerd and Isabella van Hoorn, and the second cousin of the Prince of Orange.

In 1666, Hendrik entered in the state service.

On 2 October 1667, Hendrik married Françoise van Aerssen van Sommelsdijck, daughter of Cornelius, Lord of Sommelsdijk, at The Hague. They had eight children, including five sons, of whom two married and had children.

In 1672, at the outbreak of the Franco-Dutch War (1672-78), Hendrik was appointed colonel of the Gardes du Corps. In 1674, Hendrik took part in the Battle of Seneffe where he was wounded. In 1678, he fought in the Battle of Saint-Denis where he saved the life of the Prince of Orange.

In 1679, Hendrik was created count of Nassau by Emperor Leopold I.

In 1688, Nassau-Ouwerkerk joined the Prince of Orange when he invaded England. In 1689, after the prince had been proclaimed king of England as William III, Nassau-Ouwerkerk was appointed the his Master of the Horse and was naturalized English. In 1690, he accompanied the king in Ireland and took part in the Battle of the Boyne.

In 1693, during the Nine Years' War (1688-97), Nassau-Ouwerkerk took part in the Battle of Landen. In 1695, he commanded the cavalry of the right wing during the retreat towards Ghent. In 1696, he campaigned in Flanders.

In 1702, after the death of William III during the War of the Spanish Succession (1701-14), Hendrik returned to the Dutch Republic where he was appointed commander of the army.

Nassau-Ouwerkerk is buried in the Nassau-LaLecq Crypt at Ouderkerk aan den Ijssel, Netherlands.

N.B.: the texts covering the period from 1702 to 1703 are mostly derived from our articles depicting the various campaigns, battles and sieges.