On 3 February 1682, Emperor Leopold I gave orders to FZM Sigmund Count Nigrelli to raise an infantry regiment of 10 companies. The regiment was partially enlisted in the Holy Roman Empire and in the Erblande (Habsburg Hereditary Lands). The commander of the regiment was Colonel-Lieutenant Archinto and its major, N. Syro. The regiment initially garrisoned Rheinsfeld.

From 1683, the regiment took part in the Great Turkish War (1683–1699 ). After the victory against the Turks at Vienna, it was sent to Hungary, arriving at Zips (present-day Spiš in Slovakia) in the Autumn of 1684. It was immediately assigned to the corps under the command of General Schulz. In 1685, the regiment remained in Upper Hungary. In 1686, it participated in the siege of Ofen and took its winter-quarters at Neuhäusel (present-day Nové Zámky/SK). On 12 August 1687, the regiment fought in the battle of Mohács. In 1688, it was at the siege of Belgrade and took its winter-quarters in Serbia. In 1689, the regiment returned to Upper Hungary once more.

The regiment then remained in Upper Hungary until 1697. On 11 September 1697, it took part in the battle of Zenta. After the signature of peace signature was the regiment until 1701 on cordon along Save river.

Since the creation of the regiment, its successive effective commanders were:

At the beginning of 1701, the regiment was assigned to the Army of Italy. In mid-February, the regiment marched from Inner-Austria through Carinthia by Linz and Botzen (present-day Bolzano). On 12 March, it finally reached the border between Tyrol and Venetia, a detachment taking position at Ala on the Adige. Three of its battalions were then posted at Arco and Riva del Garda. At the end of May, when Prince Eugène de Savoie launched the Imperialist invasion of Northern Italy, 3 battalions of the regiment were placed in observation in front of Monte Baldo under Count Guttenstein. By mid-July, the entire regiment had joined the main army of Prince Eugène de Savoie. On 1 September, the regiment fought in the Battle of Chiari where it was among the three regiments deployed on the right wing who repulsed the French with their steady salvoes and then counter-attacked at the point of the bayonet. During this battle, the grenadiers of the regiment, who had been converged with three other grenadier companies, captured four colours of Normandie Infanterie. The Imperial army then remained on the Oglio River until the end of November. On 11 December near Cremona, a detachment of the regiment under Grenadier Captain Gerardin destroyed 50 wagons laden with provisions. On 16 December, the same detachment brought back 150 cows to the camp of the Imperialists. The regiment took its winter-quarters along the left bank of the Mincio in front of Goito and Mantua, under the command of GdC Count Trautmannsdorf.

In 1702, the regiment took part in the campaign in Northern Italy. In February, it escorted a convoy of provisions and ammunition destined to the town of Brescello. The convoy was attacked by a French detachment but the regiment drove it back and captured 4 guns. Even though the theoretical strength of the regiment was supposed to be 2,500 men, by 30 April, it counted only 1,720 men including 12 men commandeered in various detachments and 3 absent. On August 15, it fought in the Battle of Luzzara where it was deployed on the extreme right of the first line of infantry.

In 1703, Prince Eugène having been recalled to Vienna, FZM Starhemberg took command of the Army of Italy. In February 1703, as the French tried to send a supply convoy to Bersello, the regiment attacked them, killing more than 300 men and forcing them to abandon 4 field-pieces. Afterwards, one battalion of the regiment garrisoned the Fortress of Arco in the mountains and another was posted in Trentino. In July, the second battalion of the regiment courageously defended the Pass of Raccazano in Tyrol but finally retired in front of superior forces. On 9 August, a Franco-Spanish force under General Medavi laid siege to Arco on the Sarca River in Tyrol, capturing the town of Arco during the first night and forcing the garrison (one battalion of the regiment and 50 Tyrolean militia) to retire into the castle. On 12 August, the French artillery opened on the Castle of Arco. The defenders had insufficient ammunition to maintain a regular fire with the 14 guns mounted on the walls of the castle. On 16 August, Medavi's first attack against the castle was repulsed, the Franco-Spanish losing 200 men. On 18 August, the garrison had no other choice than to surrender. The regiment having suffered heavy losses remained at Trento, Botzen and Rovereto during the following winter.

On 15 October 1704, when the Imperial army concentrated around Gavardo, the regiment (1,354 men00 was assigned to the corps under the command of Count Leiningen

In September 1706, Prince Eugène's Army (including the present regiment) effected a junction with the Savoyard Army and marched to the relief of Turin. On 7 September, the regiment (then designated as “zum Jungen”) took part in the victorious Battle of Turin where it was brigaded under the command of Count Harrach in the second line of the right wing.

In 1707, the regiment took part in the unsuccessful expedition against Toulon. Back to Piedmont, it participated in the capture of Susa. It seems that the regiment was afterwards sent to Naples where it remained until 1716.

Uniforms of officers were always of finer cloth than those of the privates. The were also distinguished from the uniforms of privates by the following differences: 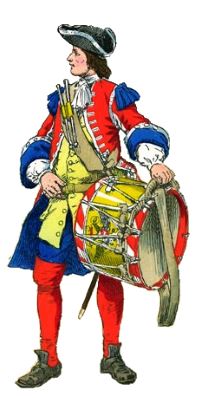 Drummer of Nigrelli Infantry - Source: detail from an illustration of Richard Knötel

The drum belt was brown and worn on the right shoulder.

Harald Skala for the translation and integration of Prybila's book