The regiment was created according to a royal decree issued on 1 April 1707 by Francisco de Paula Téllez-Girón y Benavides, Duke of Osuna at his own expense for Colonel Diego Gonzalez. It recruited in Andalusia.

During the War of the Spanish Succession, the commander of the regiment was:

In 1708, the regiment served with the Army of Extremadura, which was facing the Portuguese Army. In November, it was at the sieges of Moura and Serpa. In front of Moura, 250 dragoons of the regiment routed a Portuguese cavalry regiment.

In 1709, the regiment was at the Army of Andalusia, still operating in Extremadura. By 18 April, it was posted on the extreme left of the first line. On 16 May, it took part in the Battle of La Gudiña where it was deployed on the left of the first line, brigaded with Pavia and Grafton regiments. The Portuguese cavalry was routed. The army then blockaded Olivença, the regiment was at the camp of Telena. On 24 June, its lieutenant-colonel, Don N. Groin took 100 dragoons and dressed them with uniforms captured from the enemy at La Gudiña. During the night, he prepared an ambush between Campo Maior and Elvas. On 25 June at 8:00 a.m., the dragoons advanced towards the enemy camp, reaching the back of the bivouac. They then attacked the camp, put the enemy to flight and pursued them to the Cancaon stream.

In 1710, the regiment joined the Army of Catalonia. On 13 May, it accompanied King Philip V from Alfarrás to Lérida. During the retreat towards Aragon, it was allocated to the force of General Don Manuel del Sello who encamped at Ibars to guard the passage of the Noguera. On 27 July, the regiment took part in the Battle of Almenar where it was deployed on the right wing and suffered heavy losses. When the army retired from Lérida, the regiment was assigned to the rearguard. While retiring from Candasnos to Peñalba, it was constantly assailed by the allied cavalry, distinguishing itself in an engagement on 13 August. On 20 August, it fought in the Battle of Saragossa. After the defeat, it escorted the king to Valladolid. On 10 December, it took part in the decisive Combat of Villaviciosa.

In 1711, the regiment returned to the Army of Extremadura. By 28 August, it was encamped on the banks of the Caya. The General Marquis de Bay vainly offered battle to a Portuguese army under the command of the Count de Mascarenas. The regiment was then employed to put the region to contribution.

In 1713, the regiment was transferred to the Army of Catalonia and fought against bands of Catalan migueletes.

At the beginning of 1714, several bands of Catalan migueletes assembling at Castellvi, the regiment set off from Tarragona. From 26 February, it took part in the siege of Castellvi which surrendered shortly afterwards. Combats against the Catalans continued between Palau an San Esteve, at San Quirce, Granollers, Castell-Tersol and San Feliu de Codina. When peace was signed, the regiment was still stationed in Catalonia.

It seems that all Spanish and Italian dragoon regiments formed raised after 1702 wore, according to new royal decree of 1702, green uniforms and that all troopers, including grenadiers wore the mitre cap. 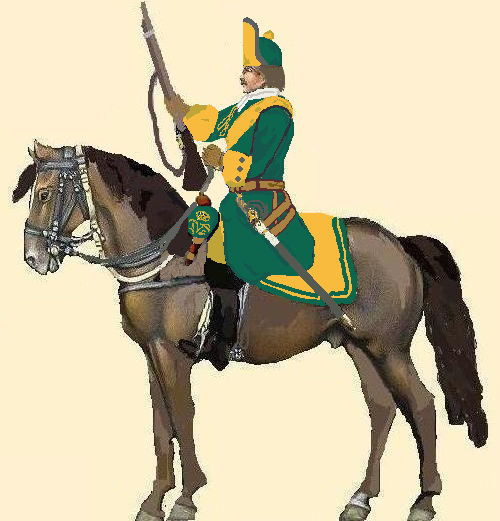 Michele Savasta Fiore for the research on the uniforms of this regiment.