Following the outbreak of the Second Anglo-Dutch War in 1665, English regiments in Dutch service were effectively disbanded. The officers were given the choice of taking the oath of allegiance to the Dutch Republic, or being discharged. A large number refused to do so and returned to England. On 31 May 1665, the repatriated English officers and soldiers formed a new regiment known as the “The Holland Maritime Regiment”: of the twenty-one officers in the regiment, twenty had previously been in Dutch service. The regiment was establishment in six companies, each of 100 men. The regiment was on the Naval Establishment and was primarily intended for service at sea.

In 1665 and 1666, the regiment served against the Dutch in the fleet. On 13 June 1665, it took part in the Battle of Lowestoft. On 10 May 1667, it was placed on the establishment of the Guards and Garrisons (the de facto English army) and ranked behind the Admiral's Regiment. By July 1667, the regiment consisted of twelve companies. During the year, a company of the regiment was transferred to the Barbadoes Regiment and a new company immediately raised to replace it. In September, the regiment was reduced to 10 companies of 60 men each. By 1668 the regiment was known as the “4th (The Holland) Regiment”. In April 1671, three companies formed part of an emergency regiment formed for the defence of the Medway at Rochester. In late 1672, one company was detached as part of a regiment in French service.

N. B.: before May 1689 the title of "Prince George's Regiment" was carried by the regiment raised in 1664 as the Lord High Admiral's Regiment. This regiment was disbanded in 1689.

By 1698, the regiment was in the English Establishment. It consisted of 10 companies for a total of 34 officers and 411 men.

The regiment was named after Prince George of Denmark from 1689 to 1708. However, during the War of the Spanish Succession, the successive colonel of the regiment were:

In March 1715, the regiment was placed on the Irish Establishment.

In 1702, the regiment took part in the expedition against Cádiz and, on October 23, in the Battle of Vigo Bay. It then returned to Portsmouth.

In 1703, the regiment was ordered to join the Duke of Marlborough in Flanders. At that time the regiment consisted of:

N.B.: the 13th company was raised only after the departure of the regiment and joined it the following year.

At the beginning of 1704, recruitment in England brought back the regiment to full strength and an additional company was added. In May, the regiment accompanied Marlborough in his march to the Danube. On 2 July, a detachment of 130 men of the regiment fought in the Battle of the Schellenberg where it lost Ensigns Harrison and Caldicott and 3 men killed and 37 men wounded. On 13 August, it fought in the victorious Battle of Blenheim where it formed part of Webb's Brigade. In this battle, the regiment lost 2 officers killed, 9 officers wounded and a large number of soldiers. On 12 September, the depleted regiment was attached to the force who escorted French prisoners taken at Blenheim from Mainz to the Dutch Republic, arriving at the Hague on 10 October.

In 1705, the regiment took part in the forcing of the French Lines at Helixem and Neer-Hespen.

In 1708, the regiment briefly returned to England before being recalled to Flanders. On 11 July, it fought in the Battle of Oudenarde. It then took part in the sieges and capture of Lille and Ghent. On that year, Prince George of Denmark, the proprietor of the regiment, died.

In 1709, the regiment took part in the siege of Tournai. On 11 September, it fought in the sanguinary Battle of Malplaquet.

In 1710, the regiment took part in the forcing of the French Lines at Pont-à-Vendin. It then participated in the sieges of Douai, Béthune, Aire and Saint-Venant.

In 1711, the regiment took part in the storming of a redoubt at Arleux and in the capture of the Castle of Chanterin. It later surprised a French force in its camp near Douai. It was at the forcing of the French Lines at Arleux and at the siege of Bouchain.

In 1712, the regiment initially encamped near Ghent before being placed in garrison at Nieuport.

In 1713, the regiment remained in Flanders during the period of negotiations for the Peace of Utrecht.

In 1714, the regiment re-embarked for England, arriving in London on 23 August. At the beginning of September, it proceeded to Berwick and then to Scotland where it was reduced to 10 companies of 40 men each.

There were still no regulation concerning uniforms and colonels were responsible for the clothing of their soldiers. Therefore, there were wide variations from one regiment to another.

Hairs were worn long in a “long bob”. They were sometimes tied at the back of the neck. The hair bag was also already in use.

NCOs wore uniforms almost identical to those of privates with the following differences:

Sergeants initially carried a halberd and corporals a musket. Gradually, all NCOs were equipped with musket.

A large gorget was worn around the neck tied with ribbons. The gorget was gilt for captains, black studded with gold for lieutenants and silver for ensigns.

Officers usually wore uniforms somewhat similar to those of privates (even though there were not yet any regulation compelling them to do so), made of finer material. Their coats were decorated with gold or silver braids down the seams and on the sleeves; and with gold or silver embroidered buttonholes. Cuffs were usually of the same colour as the coat instead of the distinctive colour of the regiment.

The waistcoats of officers were often decorated with gold or silver fringes.

A crimson sash (often interwoven with gold or silver and fringed similarly) was worn around the waist.

Breeches were tied with rosettes below the knee.

Officers carried a sword and a half pike or a spontoon.

The cartouche box of officers were often covered in velvet and decorated with gold or silver embroideries.

In 1708, the Duke of Marlborough ordered all officers serving in Flanders to have, in sign of mourning, red coats with black buttons and black buttonholes for that year.

Drummers and hautboys usually wore coat of the facing colour of the regiment, decorated with lace on the seams of sleeves and back and on the buttonholes. This coat was decorated with the crowned King's cypher or the Colonel's crest embroidered on the breast and back. Sometimes their coat had hanging sleeves.

Drums with a buff body decorated with a green dragon.

Cannon cites a description of the colours in 1684 as “the red cross of St. George, bordered with white, in a green field.” In 1707, the dragon was placed on the regimental colours.

Lieutenant-Colonel's Colour (1701): black field with a red cross of St. George bordered with white; centre device consisting of a “sun in splendour”

Major's Colour (1701): black field with a red cross of St. George bordered with white; a silver pile wavy; centre device consisting of a “sun in splendour”

First Captain's Colour (1701): black field with a red cross of St. George bordered with white; centre device consisting of a “sun in splendour”; numeral I in the first canton 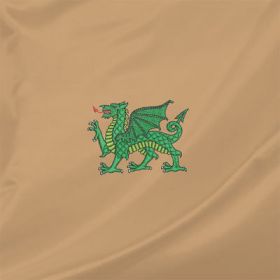 Cannon, Richard: Historical record of the Third Regiment of Foot, or the Buffs [microform] : formerly designated the Holland Regiment, containing an account of its origin in the reign of Queen Elizabeth, and of its subsequent services to 1838, London