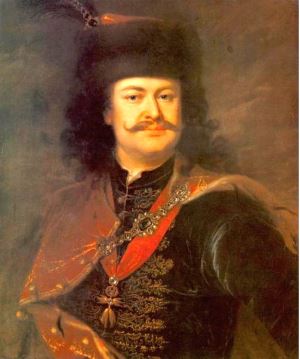 Ferenc II (Francis II) was the son of Ferencz I Rákóczi who had participated in the so-called Wesselényi conspiracy (1666-1670). His stepfather was Imre Thököly, the leader of the Anti-Habsburg rebellion (1678-1688).

After Thököly's flight to Turkey, Ferenc and his mother, Helena Zrínsky, were brought to Vienna where they lived in house arrest.

In 1694, Ferenc II Rákóczi and his mother were allowed to return to Upper Hungary. The same year, he married Charlotte Amalie von Hessen-Wanfried.

Rákóczi was appointed governor of the Komitat (county) of Sáros (present-day Šariš/SK) and lived some time at the Castle of Sáros.

In 1699, after the Treaty of Karlowitz Ferenc was detained in Vienna under the supervision of Emperor Leopold I. During his sojourn in Vienna, Ferenc II Rákóczi met the French ambassador, Claude Louis Hector Comte de Villars who tried to convince him to align with King Louis XIV and against Habsburg. Villars promised to help Rákóczi to get back the title of Fürst (prince) of Transylvania. At first, Rákóczi refused these proposals.

In the night of 18 April 1701, was captured by Count Solari who transported him to Wiener Neustadt and imprisoned him there. On 7 November, Rákóczi managed to escape and to take refuge in Poland. From there, along with Nikolaus Bercsényi, he organised the last important uprising of the Hungarian aristocracy.

On 14 June 1703, a delegation of rebels met Rákóczi in the village of Klimiecz in Poland. After some discussions, Rákóczi promised them his assistance. At the end of June, he arrived at Munkács with his best friends and reviewed the rebel forces. In July, a first engagement against an Imperial corps under Montecuccoli near Munkács soon turned to the disadvantage of the rebels and Rákóczi barely escaped. On 29 July, he made himself master of Nagy-Kalló. On 28 August, Rákóczi issued his famous proclamation which declared the rebels and their families free of all duties to the aristocrats while serving in the rebel army. By December, the rebels had reoccupied the towns of Middle Slovakia and were also masters of the whole Western Slovakia.

On 6 July 1704 at Karlsburg (present-day Alba Julia/RO), under the vehement protest of the Saxon colonists, the State Parliament elected Rákóczi as sovereign of free Transylvania and dethroned Leopold I. On 26 December, Rákóczi was defeated in the Battle of Tyrnau.

In April 1705, Rákóczi divided his army (75,000 men), assembled around Erlau (present-day Eger/HU), between Daniel Esterházy, who would operate on the left bank of the Danube; Ján Botyán, who would operate on the right bank of the Danube; and Bercsényi, who would advance on Neuhäusel (present-day Nové Zámky/SK). On 11 August, Rákóczi was defeated once more near Budmerice. On 11 November, he suffered another defeat at Sibó. After this series of disaster, the Transylvanian Estates swore allegiance to the emperor at Hermannstadt (present-day Sibiu/RO).

In August 1706, Rákóczi made himself master of Gran. At the end of the year, he held a meeting with his commanders at Rosenau (present-day Rožnava/SK). The financial situation of the rebels had been deteriorating, the copper coins stamped by the rebels had not been accepted by the inhabitants. Rákóczi established a tax on estates which temporarily solved the problem but generated confrontation between lower nobility and farmers.

In April 1707, the Estates of Hungary met at Maros-Vásarhely (present-day Tirgu Mures/RO) and elected Rákóczi as sovereign of Hungary. However, Rákóczi had to guarantee the old privileges of the aristocracy.

On 3 August 1708, Rákóczi suffered a crushing defeat at Trencsén. It was the beginning of the end for the rebels. Nevertheless, Rákóczi managed to assemble 5,000 men near Erlau. By the end of the year, Rákóczi's Army had been driven back behind the Gran River (present-day Hron/SK).

In April, Rákóczi tried to enlist new recruits but the inhabitants fled into the forests to evade enlistment.

On 30 April 1711, after a struggle of eight years, 12,000 rebels finally surrendered near Majtény in Hungary. Rákóczi then went to Paris.

In 1714, Rákóczi moved to the monastry of Camaldulesde de Grosbois where he wrote his memoires.

In 1717, Rákóczi left France and went to Turkey with 40 of his followers.

Until his death, on 8 April 1735, Rákóczi lived at Tekirdag (Rodosto) in Turkey.

In 1906, Rákóczi's body was transferred to Košice/SK and, on 29 October, was buried in St. Elisabeth Church.

N.B.: the texts on the period extending from 1701 to 1709 are mostly derived from our articles depicting the various campaigns, battles and sieges.