The regiment originated from the “Guardia” created in 1697 for King Charles II and commanded by the Prince of Hesse-Darmstadt. It initially counted 15 companies. On 11 January 1703, Philip V, the new king of Spain, disbanded this regiment, incorporating its 15 companies into the newly raised “La Reina” cavalry regiment. On 24 April of the same year, “La Reina” was itself split into two distinct regiments: “La Reina” and “Real des Asturias”, each counting 8 companies. These two regiments obtained precedence over all other line cavalry regiments.

During the War of the Spanish Succession, command of the regiment was assumed by its successive colonels:

On 22 May 1703, the new “Real des Asturias” regiment was reviewed for the first time. It then went to the village of Cassany where it remained until 17 August when it was brigaded with Reina Cavalry under the command of King Philip V. It then marched through Madrid and, on 14 September, took post on the road of Toledo when the court visited the cathedral of the Virgin of Sagrario of the Santa Iglesia. In November, the regiment was ordered to march to Talavera de la Reina from where it went to Extremadura and took up cantonments on the frontier with Portugal.

In 1704, the regiment formed part of the Franco-Spanish army who laid siege to Salvatierra. The place surrendered on 8 May. The regiment was then attached to the corps of General Jeoffreville and took part in the siege of Castelho Branco from 19 to 23 May when the Dutch defenders capitulated. The regiment concluded the campaign with the capture of various villages.

In 1705, the regiment was detached to cover the Zarza near Alcántara. However, the enemy burned the place before the arrival of the regiment who encamped on the Gato River with other units. It was then transferred to Aragon. In September, it served in this new theatre of operation under the command of the Prince Tserclaes de Tilly. As part of one of the divisions operating in this province, the regiment defeated the British, captured Alcañiz and, under the Count de San Estéban de Gormaz, then covered Alfaraz to guard the passage of the Cinca. Shortly afterwards, the Catalans marched on Fraga and the regiment advanced to meet them. However, it arrived too late, the Catalans having captured the town. At about this time, a British force landed in the harbour of Altea and the entire Kingdom of Valencia revolted against Philip V. The governor precipitously redirected a corps (including this regiment) under the command of General Don Antonio de Amezaga against Valencia. In mid-December, Amezaga reduced Monrroyo to ashes. He then concentrated all troops arriving from Aragon and Castile. On 26 December, Amezaga and the Count de las Torres laid siege to San Mateo.

On January 1 1706, because he lacked artillery, Las Torres raised the siege of San Mateo and retired to Salsadella. He defeated the rebels and laid siege to Villareal. On 12 January, he ordered a general assault for which the regiment contributed eight dismounted men per company with their officers. This detachment, advanced on one of the gates and broke it with axes under a rain of musket balls, boiling water and stones. The Spaniards finally managed to make themselves master of the place. In this affair, the regiment lost one second-lieutenant and three carabiniers. Operations immediately resumed against the place of Burjasot, defended by 8,000 regulars and irregulars. The regiment contributed 80 men and its company of carabiniers to the successful attack of the place. The British General Peterborough having captured Murviedro, the Spanish corps operating in the region took position between the Alcudia and Carlet to defend the Pass of Alcira. On the night of Holy Thursday, the rebels tried to surprise this corps but were driven back and they did not stop until they reached Valencia. At the beginning of April, the Spanish corps laid siege to Alcira and captured the place in a few days. It then advanced on Játiva defended by the British. The Spanish batteries opened breaches but the general had not considered the multitude of defensive works that could only be taken with heavy combat. As the Spanish infantry units were much depleted, cavalrymen and dragoons dismounted for the assault. The carabinier company of the regiment led the column of assault and advanced to the breach where it lost its captain, Don Juan de Ibar and a few men. The lieutenant, the second-lieutenant, the first sergeant and a large part of the company were wounded. This carnage forced Las Torres to abandon his enterprise against Játiva. He raised the siege and marched to the relief of the garrison of Montesa. His corps also contributed in the capture of the Castle of Elche. Las Torres' Corps then marched to New Castile where it joined the army assembled at the camp of Atienza, taking position on the right of the first line.

On 25 April 1707, the regiment took part in the Battle of Almansa. It then pursued the enemy and, on 8 May, entered into Valencia. On 16 May, it occupied San Mateo. Captain Don José Vallejo was then detached with 50 horse to escort a convoy to Castile. When the Duc d'Orléans took command of the Franco-Spanish army, the regiment marched to Catalonia and took part at all the operations of the siege of Lérida until its surrender.

In 1708, the regiment was still posted on the right wing of the first line. On 9 May, it crossed the military bridge of Segre in front of Gromiá to effect a junction with the rest of the army of the Duc d'Orléans. It then took part in the siege and capture of Tortosa.

In 1709, the regiment formed part of the army concentrated on the banks of the Cinca and Segre for the planned campaign against Lérida and Balaguer. On 27 August, the regiment distinguished itself when it was ordered to support the French cavalry retreating in front of Lérida and being charged by 30 squadrons while passing the Noguera River. The regiment advanced, deployed, leaving intervals to allow the defeated cavalrymen to escape and prepared for combat. The Austro-British troops halted and retired.

In 1710, the regiment initially campaigned in Catalonia. When Philip V decided to abandon the Province of Aragon and to retire to Lérida, on 27 July, the regiment took part in the Battle of Almenar. On 13 August, during the passage of the Cinca, it engaged and drove back 28 squadrons at Peñalva, capturing seven standards and one pair of kettle-drums. On 20 August, it fought in the Battle of Saragossa where it sacrificed itself to save the Reales Guardias Valonas. Because of the heavy losses suffered in this last battle, the regiment was sent to Extremadura to replenish its ranks. In November, the regiment rejoined the army who drove Archduke Charles out of Toledo. On 10 December, the regiment took part in the decisive Combat of Villaviciosa and then pursued the enemy up to the Ebro.

In 1711, the regiment was posted on the right wing of the second line of the army. It took part in the operations against Prats del Rey and Calaf. In mid-October, it attacked a convoy near Termens, killing 80 men and capturing the entire convoy. It took up its winter-quarters in Aragon, arriving at Daroca on 25 December.

In 1712, all Spanish forces concentrated their efforts on Lérida under the command of the Prince Tserclaes de Tilly. The regiment marched from Aragon and joined the army. However, a large number of rebels somatenes obstructed the roads and intercepted supply convoys sent from Saragossa. Colonel Fuentebuena of the regiment offered to prevent the rebels from capturing supplies. He took position in the cantons of Pina and Bujaraloz and drove back the somatenes.

At the beginning of the campaign of 1713, the regiment marched from Aragon and joined the army blockading Barcelona.

In 1714, the regiment took part in the blockade and siege of Barcelona. On 11 September, the carabinier company of the regiment under Captain Don Tomás de Vera dismounted to take part in the general assault. Barcelona was finally captured. The regiment then took up cantons in the Principality of Catalonia. 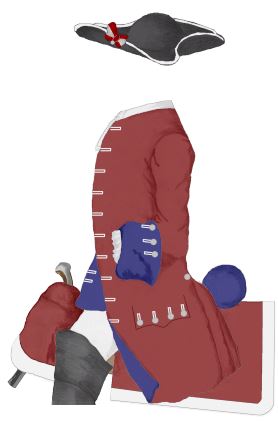 The aprons of trumpets and kettle-drums were made of blue velvet.

The standards of the regiment were made of blue velvet with the red cross of Burgundy with a crown at each end. The centre device consisted of the royal arms flanked by two lions embroidered in silver and silk.

N.B.: the blue distinctive was granted to the regiment only after the Battle of Saragossa (20 August 1710) where it had come to the assistance of the Reales Guardias Valonas.