On 13 April 1701, the Marquis de Bedmar, at the request of Maréchal Boufflers, reorganised the tercio to follow the organisation of French dragoon regiments. It kept its old guidon carrying the arms of the Count de Monterey.

The successive colonels of the tercio/regiment were:

In 1702, the tercio had its quarters in Namur. It received orders to join the army assembling at Wachtendonk in Guelderland under the command of the Maréchal de Boufflers. On 25 April, this army set off from Wachtendonk. On 26 April, it reached Alpen, intending to attack an Allied army posted near Kleve. On 3 May, the Duc de Bourgogne rejoined this army and took command. On 9 June, the regiment engaged the British cavalry as the Allies were retreating towards Nijmegen. During the combat, it captured a pair of kettle-drums. By 1 July, the regiment was encamped at Genappe. On 23 August, it was present at the cannonade near Peer. It then retired in the Lines of Brabant.

In mid-May 1703, the regiment was part of the army of the Maréchal de Villeroy who advanced on Maastricht. On 30 June, it fought in the Battle of Ekeren.

In 1704, the regiment was part of the auxiliary corps sent from Brabant to reinforce the Maréchal de Tallard in Bavaria. On 9 June, it reached Landau in Alsace. In the first days of July it marched across the Black Forest by the Kinzing Valley. On 10 July, it crossed the Danube at Lawinghen (unidentified location). Reinforcements did not reach Tallard who was decisively defeated at Blenheim in mid-August. The regiment, which was part of Villeroy's Corps, then retired to Haguenau and later to the Spanish Netherlands where it rejoined Bedmar's Army.

In mid-May 1706, the regiment joined the army assembling at Leuven under the command of the Elector of Bavaria. This army passed the Dyle and bivouacked between Tienen and Judoque (unidentified location). On 23 May, the regiment took part in the Battle of Ramillies.

In 1708, after the defeat of the Franco-Spanish army at Oudenarde, the regiment reinforced the army of the Duc de Bourgogne. On 28 September, the regiment took part in the Engagement of Wijnendale.

In 1710, the regiment evacuated the Spanish Netherlands and marched through France to Catalonia. On 10 June, it joined the army encamped at Balaguer. On 13 June, it was forced to retire to Belcayre and Bellmunt; and on 14 June, between Ibars and Berbens. On 30 June, it was attached to a corps under the command of the General Baron de Huart who was sent to reinforce the Spanish troops fighting the rebels in the Rivagorza region. At the beginning of July, it recaptured the bridge of Naval and then to the relief of the Castle of Ainsa surrounded by the migueletes. In mid-July, it repassed the Cinca and destroyed the bridge. At the end of July, the regiment retired to Roussillon with the rest of Huart's force. It later took part in the siege of Gerona.

In 1711, the regiment was posted on the right wing of the first line. When Gerona surrendered, on 25 January, the regiment was detached under the command of General Marquis de Arpajou in the mountains of Aragon and Catalonia. In August, this force captured the Castle of Arenys, taking the Austrian General Schower prisoner. The regiment was then transferred to the division of the Count de Muret who reinforced the camp of Calaf and took part in an engagement near that camp. From 12 November, Muret's Division took part in the siege of Cardona. On 17 November, the besiegers stormed the town and the defenders took refuge in the castle. On 11 December, the quarters of the regiment were attacked by an Allied relief force which was driven back. On 19 December, the regiment dislodged the Allies from the neighbouring heights. On 21 December, the Allies counter-attacked and the colonel of the regiment, the Comte de Melun was killed in combat. Nevertheless, his dragoons managed to recapture their position. On 22 December, the Franco-Spanish army raised the siege of Cardona and retired to the camp of Calaf. On 24 December, it retired to Balaguer and the regiment took up its winter-quarters at Calatayud.

At the end of July 1712, the regiment joined the army at Fraga. On 18 October, the regiment crossed the Segre and took position near Agramunt but lack of forage forced it to recross the river on 19 November. It then took up its winter-quarters.

In 1713, the regiment took part in the blockade of Barcelona where detachments were charged to escort convoys.

In 1714, the regiment took part in the siege and capture of Barcelona. 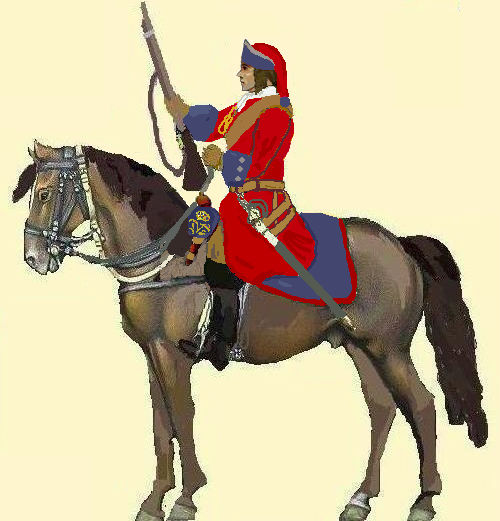 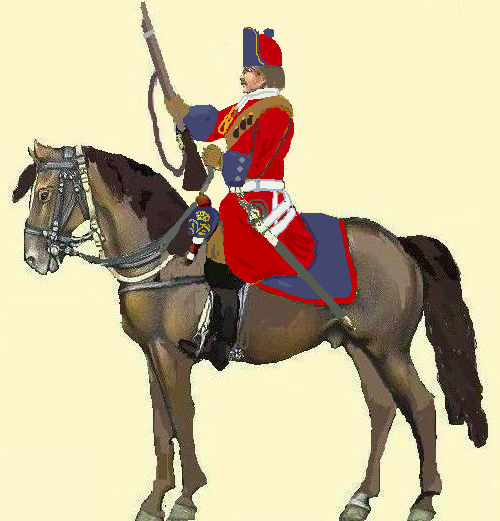 Troopers were armed with a sword, two pistols and a musket.

After 1675, the regiment was authorised to had a kettle-drummer in each of its two squadrons, in recognition of its conduct at the Battle of Konzer Brücke (11 August 1675) where it captured these kettle-drums from the French Garde du Corps. The aprons of the kettle-drums were of sky blue velvet and carried the arms of France.

The guidons of the tercio/regiment remained unchanged from its creation to 1728.

Ordonnance Guidons (carried by all other squadrons): crimson field