The regiment was created from various cuirassier companies serving in the County of Rosellon on 11 March 1640 and assembled on 15 June of the same year.

On 2 May 1659, the unit was reorganised as a tercio and designated as “Tercio de Cabaleria del Rosellon”.

In 1662, during the Portuguese Restoration War, the tercio joined the Army of Extremadura and took part in the campaign in Portugal, in the siege and capture of Juromenha and in the occupation of Veyros, Monforte and Crato. At the end of the year, it was transferred to Catalonia. In 1663, the tercio was sent back to Portugal where it took part in the siege of Evora and in the Battle of Ameixial before retiring to Extremadura. In 1664, it entered into Portugal once more, taking part in the capture of Cabeza-da-Vide and Arronches. In 1665, it fought in the Battle of Montes Claros. In 1666, it campaigned in Portugal. In 1667, it contributed to the defence of Albuquerque. In 1668, it retired to Extremadura and was later transferred to Catalonia.

In 1674, when Spain got involved in the Franco-Dutch War (1672–78), the tercio took part in the siege of Bellegarde and in the Battle of Maureillas. In 1676, it was sent to Navarre. In 1678, it was at the unsuccessful defence of Puigcerdà.

In 1684, the tercio took part in the defence of Gerona.

In 1699, the tercio was sent to the Military District of Andalusia.

From 1703, the regiment was named “Rosellon Viejo” to distinguish it from the newly raised “Rosellon Nuevo”.

In 1701, the tercio was posted in the harbour of Santa Maria.

In 1702, when the Allies proceeded to the Siege of Cádiz, the tercio joined the forces of the Captain-General Marquis de Villadarias who forced the Allies to re-embark.

In 1703, the regiment contributed one company (the company of Captain Don Francisco Eguarás) to the creation of Santiago Cavalry (raised on June 15 1703) and six others to the the newly raised Rosellon Nuevo Cavalry (raised on April 16 1703). The former regiment was renamed “Rosellon Viejo” to distinguish it from the new one.

In 1704, the regiment was allocated to the army assembling for a campaign in Portugal. On 28 March, when the regiment was reviewed in Badajoz, it counted 9 companies of 35 soldiers each. After its return from Portugal, it was cantoned in Extremadura.

In March 1705, the regiment was barracked in the region of Ciudad-Rodrigo to oppose the Portuguese army threatening Castile. It took position on the banks of the Agueda in front of the enemy and retired after a cannonade. It was then allocated to the corps of Brigadier Don Baltasar de Moscoso who conducted rearguard actions against the Portuguese. In April, when the regiment was reviewed in Valladolid, it counted 12 companies of 30 soldiers each. Later, a detachment surprised the suburbs of Aldea and Villaviciosa where it took 500 foot and 100 horse prisoners. On October 2, the regiment made a sortie from Badajoz to effect a junction with the relief army of the Maréchal de Tessé.

In 1706, the regiment was stationed at Alcolea del Conde. It was charged to burn all fruits in the countryside of Elvas. In March, when the Allies advanced in the direction of Badajoz, the regiment marched to Membrio and Salorino near Alcántara. Shortly afterwards, it marched to Brozas and then to Badajoz and the vicinities of Madrid. In the camp of Atienza, it was allocated to the left wing of the first line, in the first cavalry brigade under Brigadier Endricourt. The regiment was later transferred to the detachment of the General Count de las Torres who drove the troops of Archduke Charles of Austria out of the District of Valencia.

In 1707, the regiment joined the Army of Castile where it formed part of the third cavalry brigade of the first line under Brigadier Don Rodrigo de Venegas y Córdova. On 25 April 1707, the regiment fought bravely in the Battle of Almansa, contributing to the victory and pursuing the Allies. The campaign ended with the siege of Lérida.

In 1708, the regiment joined the Army of Catalonia where it was posted on the right wing of the second line. The regiment took part in the siege of Tortosa. On 17 June, it drove back a sortie of the garrison. On 28 June, it repulsed another sortie, pursuing the garrison to the covert way. It was then sent to the camp of Agramunt. A detachment was charged to observe the march of the Allies at Belpuig.

Note: some sources mention that, on 12 December 1710, the regiment took part in the Combat of Villaviciosa.

In 1711, the regiment joined the Army of Aragon where it was posted on the left wing of the second line.

In 1714, the regiment took part in the blockade, siege and capture of Barcelona. 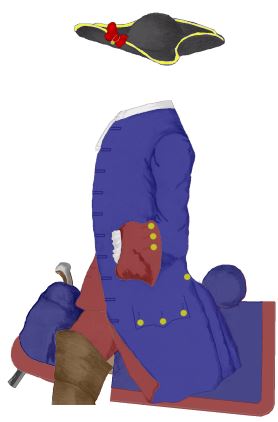