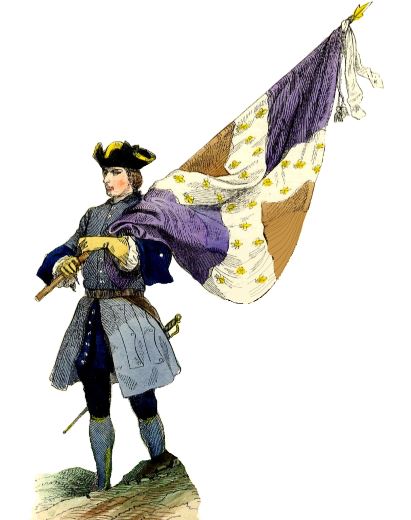 The Régiment Royal, was raised by the Duc d'Arpajon according to a commission issued on 20 January 1656. In 1657, it took part in the siege and capture of Montmédy and in the sieges of Saint-Venant, Wates and Mardyk, In September, it worked at the rebuilding of the fortifications of Bourbourg. In 1658, it initially campaigned in Lorraine before being transferred to Flanders in July. It then took part in the investment and capture of Gravelines. Afterwards, it went to Menin to assume garrison duty.

After the death of Gaston, Duc d'Orléans, brother of Louis XIII, an edict dated 13 February 1660 merge his regiment (Régiment de l'Altesse raised on 20 December 1644) with the Régiment Royal: the former forming the first battalion of the new unit and transmitting it its seniority (41st); the latter forming the second battalion and eventually giving it its name. Because of this amalgamation of two regiment, Royal Infanterie exceptionally carried two white and two colonel colours for several years.

In 1660, immediately after its formation, the new regiment marched to Lorraine where its two battalions garrisoned Nancy and Thionville. In 1663, the regiment took part in the capture of Marsal. After this campaign, it was increased to 40 companies. In June 1664, the 20 senior companies went to Toulon and embarked on a fleet who sailed for Africa. On 23 July, they landed at Djigelli and immediately occupied the “Fort du Marabout closing the entry of the harbour. After this expedition, the regiment remained in the region of Toulon till 1666.

After the war, the regiment was reduced to two battalions.

In 1701, the regiment occupied Ghent, then Namur, in the name of Philip V and ended the campaign at the camp of Roermond. It wintered in the Electorate of Cologne where one of its company was captured by a party of Allied cavalry.

In 1702, the third battalion was thrown into Venloo where it distinguished itself in the glorious defence of the garrison. It then rejoined the two other battalions, who were serving under the Duc de Bougogne. The entire regiment took its winter-quarters in Bonn. A detachment of the regiment sent against Guiminich captured 300 Imperial dragoons with a large number of horses, a few standards and kettle-drums. Captain de Canval was killed during this expedition.

At the opening of the campaign of 1703, the third battalion was detached to the Army of Flanders to serve under the Maréchal de Villeroy. In April, the two other battalions were besieged in Bonn. The place was not very good and after 12 days of open trenches, it was already at bay. The Marquis d'Alègre, commanding there, despairing to be able to sustain an assault, attempted a sally at the head of the these two battalions. They reached the batteries of the Allies, nailed 10 guns and 6 mortars. They then orderly retreated, bringing back 60 prisoners including a colonel and several officers. A few days later, the besiegers, convinced that the garrison was resolute to resist, granted it the conditions that it requested. The garrison marched to Luxembourg. Exhausted by this siege, the two battalions were almost naked. Each soldier received a waistcoat and a smock frock. Then they marched to Alsace where they joined the Duc de Bourgogne for the siege of Breisach. They twice guarded the trenches. In October, they took part in the Siege of Landau. On 8 November, they participated in the attack of the counterguards. At a given signal, their grenadiers bravely advanced but were soon decimated by a deadly fire. Captain Lafitte was killed and 8 grenadier officers wounded. On 13 November, the two battalions successfully stormed the counterguard. Captain de Breytagne perished in this second assault. He had already been wounded during the first assault. On 14 November, the battalions were part of the corps assembled to go to meet the Allied relief force approaching under the command of the Prince of Hesse-Cassel. On 15 November, the battalions distinguished themselves at the Combat of Speyerbach. They occupied the centre of the first line. The combat had begun on the right. The Lieutenant-Colonel Marquis de Calvo, taking advantage of a bad manoeuvres of the Allies, charged with his two battalions who were soon imitated by the rest of the French infantry, thus deciding the day. In this combat, the French captured more standards and colours than they lost soldiers. In this action, the regiment lost its lieutenant-colonel, the Marquis de Calvo and Captain de Blasignac. Landau surrendered shortly afterwards. Meanwhile, the third battalion, who had started the campaign in Flanders, had been detached in September under the Marquis de Pracomtal to observe the movements of the Prince of Hesse-Cassel. Pracontal arrived too late to take part in the Combat of Speyerbach. The three reunited battalions took their winter-quarters at Trier and other places on the Saar River.

In 1704, the regiment was charged to escort recruits destined to the Army of Bavaria. On 13 August, it took part in the Battle of Blenheim where it occupied with Languedoc Infanterie village of Blenheim on the right of Tallard's lines. After the rout of the French cavalry, the village was churned up by the fire of four guns. Then 7 British battalions, who had just annihilated Zurlauben Infanterie, took the regiment between two fires and forced it to retire disorderly from the village. Its colonel-lieutenant, M. d'Enonville, with 150 men took position in the churchyard and managed to slow down the victorious British regiments. Meanwhile, Lieutenant-Colonel de Saint-Maurice rallied the regiment in Blenheim. He then launched a desperate sally and managed to drive the British back to the plain. But these valiant efforts remained useless. Colonel d'Enonville, completely surrounded by the enemy and ignoring the fate of his regiment in Blenheim, finally capitulated to Lord Cutts. The regiment burnt its colours. In this disastrous battle, the regiment lost 40 officers killed or wounded and more than 400 men. Among the dead were Lieutenants de Ronnac and de Brie. Later, M. de Saint-Maurice was promoted to brigadier for his conduct on the battlefield. After assembling the remnants of the regiment at Thionville, it was sent to Sédan to replenish its ranks.

For the campaign of 1705, the regiment could field two battalions. It served in Flanders and took part in the siege of Huy. It then went to Valenciennes where its third battalion was re-established.

In 1706, the regiment served on the Rhine. On 1 May, it took part in the storming of the entrenchments of Drusenheim and in the relief of Fort-Louis which led to the surrender of Drusenheim, Lauterburg and Haguenau. The losses endured at the Battle of Ramillies forced Louis XIV to send reinforcements (including Royal Infanterie) to his Army of Flanders. The regiment was distributed among various places threatened by the Allies. It took its winter-quarters in Dunkerque.

In 1707, the regiment was stationed in Aire.

In 1708, the regiment joined the army at Mons. On 11 July, it was at the Battle of Battle of Oudenarde but was not involved in any combat. It was later detached under the Comte de La Mothe-Houdancourt and took part in the attack of a convoy destined to the siege of Lille. A battalion of the regiment even managed to enter into Lille and contributed to its defence. The two other battalions took part in the capture of Leffinghem and later defended Ghent. In a sally, their grenadiers along with the grenadiers of other regiments drove back four British battalions. After the capitulation of Ghent, the regiment retired to Picardie where it was distributed in Boulogne, Ardres and Montreuil.

On 11 September 1709, the regiment along with Picardie Infanterie fought in the Battle of Malplaquet where it occupied the right of the second line of infantry. When the first line was forced, the regiment came to the rescue and drove the enemy out of the entrenchments which they had just conquered. However, the Allies soon came back to the attack in several columns and broke the Gardes-Françaises. Once more, the regiment came to the rescue and at the point of the bayonet reconquered the terrain lost by the Gardes-Françaises. Continuing its advance, the regiment along with Navarre Infanterie reached the batteries of the Allies, captured 12 guns but was unable to bring them back because it had no horse. It returned to the line of battle with 11 British and Dutch colours. At this moment, Villars was wounded, leaving the French left without commander. In this battle, the regiment lost 54 officers killed or wounded. Among the dead were the Lieutenant-Colonel Saint-Ouën, the commander of battalion Montbrac and 8 captains. The Colonel-Lieutenant Comte d'Aubigné (Madame de Maintenon's nephew) was wounded.

On 24 July 1712, the regiment took part in the Battle of Denain. Later, he was at the siege of Douai where it lost Captain Morel and 40 grenadiers during the attack of the covert way. Before the end of the siege, the regiment was sent to invest Le Quesnoy where he had 105 men killed or wounded in a single night. It then join the army who covered the siege of Bouchain.

In 1713, the regiment campaigned on the Rhine where it covered the siege of Landau. It then contributed to the capture of the lines of the Imperialists in front of Freiburg and took part in the siege of this place.

Please note that in the accompanying illustration, the drummer carries a drum at the arms of Navarre. The drum barrel should be royal blue decorated with golden fleurs de lys.