At the end of December 1703, the regiment set off from Galicia to join the Army of Extremadura, taking up cantonments in Ciudad Rodrigo.

In 1704, Don Juan de Tovar y Castilla exchanged his regiment with Don Pedro Manso de Zuñiga, who previously commanded Manso Cavalry in the Kingdom of Naples. The regiment was then stationed in Sevilla under the command of Don Ignacio de Villacis. In October, the regiment joined the Spanish army who came to the relief of Ciudad Rodrigo.

In 1705, the regiment took part in the relief of Badajoz.

In 1706, the regiment was attached to the Army of Extremadura commanded by the Duke of Berwick. The regiment covered the retreat from Brozas. When the Allies tried to occupy the camp of Bazagona, it advanced with the first division who advanced against them and forced them to abandon their design. It then marched to the camp of Ciempozuelos and took the direction of Extremadura. It later joined the army assembling at Atienza in New Castile where it was posted on the left of the first line. It was attached to a column of cavalry sent to lift the blockade of Salamanca. The regiment then took position at Zamora. At the end of October, it entered in Portugal, advanced to Miranda, plundered a few villages and set eight villages afire, before returning to Zamora with several prisoners, 100 cows and two carts of sugar.

In 1708, the regiment patrolled the frontiers of Castile and Extremadura.

On 7 May 1709, the regiment took part in the Battle of La Gudiña where it fought against the Portuguese San Juan Dragoons and captured a few pieces of artillery. In June, it participated in the blockade of Olivenza where it was posted on the left of the first line. It was then sent to cover the Brozas and Cáceres. In July, it was sent in quarters at Alcántara from where it participated in several incursions in Portugal under the command of General Montenegro.

In 1710, it accompanied the Maréchal-de-Camp Don Juan Antonio Montenegro in his expedition in Portugal against several villages around Bastahon and Braganza. The regiment then returned to Old Castile. On 11 March, it accompanied the army in its invasion of Portugal, putting 15 villages to contribution and bringing back 3,000 cattle heads. When the king assembled his army at Plasencia, the regiment marched to the banks of the Tagus, occupied Villacastin. In October, it advanced to Torrelaguna to observe the enemy. On 30 November, it entered in Madrid. It then escorted supply convoy from Segovia to Madrid. On 7 December, it caught up with the Allied rearguard. On 8 December, during the Combat of Brihuega, it took an entire German regiment prisoners. On 10 December, it fought in the decisive Combat of Villaviciosa, where it captured 12 standards. It then pursued the remnants of the Allied army. On 11 December, it took 200 prisoners in Hita and continued its advance up to the Cinca. It was then attached to the column under Don Feliciano Bracamonte which harassed the Allies until their arrival at Saragossa. It later served in various locations in Aragon and Catalonia.

In 1711, the regiment was attached to the Army of Aragon where it was posted on the left of the second line. In August, the regiment was transferred to Prats del Rey where it took part in the siege until the surrender of the place on 25 December.

In 1713, the regiment fought against partisans in Catalonia, defeating Nebot on two occasions. It then took part in the blockade of Barcelona.

In 1714, after the surrender of Barcelona, one squadron of the regiment advanced on Villanueva de Sitxes where it was surprised by 4,000 insurgents under the Marquis de Poal. Together with the garrison, this squadron defended the place for eleven days until the arrival of reinforcements.

Very little is known about the uniform of this regiment to the exception that the uniform was white with blue as its distinctive colour. We don't know the metal colour of the regiment. 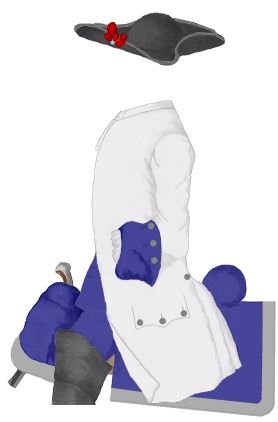