On 11 December 1688, Hannibal Count Löwenschild (aka Löwenskjöld) obtained from Emperor Leopold I a decree authorising him to raise a dragoon regiment of 800 men (8 companies). Enlistment was supposed to take place within the “Reich” territory, but Löwenschild sent his recruiting officers to Silesia. The enlistment went slowly and, in May or June 1690, Löwenschild resigned from his function. Only a few days later , the emperor appointed Count Schlik (aka Schlick) as the new proprietor of the regiment. In 1690, the still incomplete regiment took part in the blockade of Kanisza.

In 1691, the regiment took part in the siege of Grosswardein. The regiment was then, along with Saint-Croix Cuirassiers and Truchsess Cuirassiers, allocated to the corps of GFWM Veit Heinrich Truchsess von Wetzhausen. It took up its winter-quarters in Upper and Lower Hungary.

In 1697, 10 companies of the regiment fought in the victorious Battle of Zenta, where they formed part of the corps of FZM Guido Count Starhemberg. In October, the regiment was part of the troops (4,000 horse, 2,500 fusiliers and grenadiers, some mineurs, with 12 guns and 2 mortars, the horse militia of Colonel Kyba and the Broder Grenzmiliz), which had been selected to accompany Prince Eugène de Savoie in his expedition to Bosnia.

In September 1698, the regiment participated in the – unsuccessful – siege of Temesvar and was then sent to Arad with 11 other cavalry regiments, to secure the refurbishment of this fortress.

In 1802, the regiment was transformed into a chevauxlegers regiment once more, and, in 1851, into a uhlan regiment, designated as No. 6.

Until the beginning of 1703, the regiment garrisoned various places in Transylvania and was increased to 12 companies (6 squadrons).

At the beginning of 1703, FML Gustav Hannibal Count Schlik concentrated a corps of around 20,000 men on the Enns River. His own dragoon regiment (now 644 men in only 6 companies) arrived in March at the camp on the border between Austria and Bavaria. On 2 March, at the beginning of the campaign on the Danube, Schlik's Corps crossed the border near Erlach , broke through the lines of he Bavarian army and reached Riedau. On 11 March, the present regiment took part in an engagement against the Bavarians near Schardenberg and Eisenbirn. It came to the assistance of the Jung-Hannover Cuirassiers, but the Imperialists were forced to retire to Passau in front of superior forces.

In October, the regiment was sent to Pressburg (present-day Bratislava/SK), where an imperialist corps was assembling under the command of G.d.C. Count Schlik, to quench Rákóczi Uprising in Hungary. On October 25, this corps set off from Pressburg and marched towards Lewenz (present-day Levice/SK). On 31 October, the regiment took part in the Combat of Lewenz. At the beginning of November, this corps proceeded by way of Schemnitz (present-day Banská Šťiavnica/SK) towards Kremnitz (present-day Kremnica/SK). Major-General Forgách occupied Neusohl (present-day Zvolen/SK). However, Schlik’s Corps was soon forced to retire by way of Tyrnau towards Pressburg, constantly harassed by superior Kuruc forces.

At the beginning of 1704, Colonel Pierre-Joseph de Viard Baron de Coussances was sent with 200 men of the La Tour Cuirassiers and the Schlik Dragoons from their camp on “Kleine Schüttinsel” against the Kurucs. At night on 11 January, Viard clashed with the Kuruc vanguard between Remete and Ásvány, he scattered them and broke the ice on the Danube River.

By April, the regiment formed part of the main army under Field Marshal Heister. On 8 April, he attacked 6,000 Kurucs in front of Stuhlweissenburg (present-day Székesfehérvár/HU). On 8 April, during the Combat of Stuhlweissenburg, the present regiment and the Bayreuth Dragoons surprised the right wing of the rebels, which tried to take refuge behind the city walls. On 9 April, the place surrendered and 1,500 Kuruc were taken prisoner, many colours and guns were captured also by the Imperialist troops.

On 13 June, the regiment took part in the Battle of Raab, where it was deployed in the second line. It nearly annihilated the rebel left wing, the Kurucs fled to the swampy banks of the Raaba River. An armistice was then signed.

By the end of November, when hostilities reopened, the regiment numbered 865 men and constituted FM Heister’s strongest cavalry regiment. On 26 December, the regiment took part in Heister’s victory in the Battle of Tyrnau.

For the campaign of 1705, the regiment was once more allocated to Heister’s Corps which concentrated on the “Kleine Schütt-Insel.” By that time, the regiment numbered 967 men, of which 321 had no horse. On 11 April, Heister was replaced by Field Marshal Louis Comte d’Herbéviller.

On 14 July, Count Schlik was appointed Kriegskommissar (Commissary of War) and had to cede his regiment.

On 11 August, the regiment participated in the Battle of Budmeritz.

On 18 August, Colonel Gundaker Ludwig Count Althann, the new proprietor of the regiment, took command. He added two companies (each of 75 men) to his new regiment. The unit was allocated to d’Herbérviller’s Corps and G.d.C Count Schlik brought the regiment to Transylvania. On its way, it supplied Grosswardein with the necessary provisions and ammunition.

On 11 November, the regiment fought in the Battle of Schibo, where it was deployed in the second line at the head of the cavalry of FML Johann Heinrich Baron Glöckelsberg. In the most dangerous moment of he battle, d'Herbéviller sent 3 squadrons of the present regiment to support the battalions of Major-General Count Löwenburgs, which were in full retreat. The attack of the Kurucs was stopped, and the remaining cavalry, along with some infantry, stormed their entrenchments.

For the campaign of 1706, the Althann Dragoons were allocated to the corps of Field Marshal Comte Rabutin.

Rabutin then laid siege to Kaschau (present-day Košice/SK). When he learned that a large relief force under Count Károlyi was on its way, he decided to retire towards Szolnok, During his retreat, his corps was constantly harassed by Kuruc troops. Rabutin then marched towards Ofen, where he arrived in January 1707 with only 4,000 men in very poor condition.

In 1707, the regiment was allocated to the corps of Field Marshal Guido Starhemberg. During the campaign in Hungary, it took part in all operations of this corps.

At the beginning of the campaign of 1708, the regiment numbered 524 men. Stationed in Hungary, it saw no action during the first half of the year. For this campaign, FM Count Sigbert Heister replaced FM Guido Count Starhemberg in Hungary, the latter being sent to Catalonia.

On 3 August, the regiment took part in the Battle of Trentschin where two squadrons of the regiment passed a deep trench parallel to the road leading to Trentschin. It was followed by all of Pálffy’s cavalry and attacked the right flank of Pekry’s cavalry which fled. Pálffy immediately attacked the right flank of Ebeczky which fled too after short resistance.

On 22 August, Pálffy advanced on Neutra (present-day Nitra/SK) with 6 battalions and 3,000 horse (including the present regiment). Aftere a short bombardment by 22 mortars, Neutra capitulated on 25 August.

After some manoeuvres of Heister’s Army, the regiment took up its winter-quarters: 6 companies along the Gran River, and 6 companies between Neutra and the Waag River.

In 1709, the regiment campaigned once more in Hungary as part of Heister’s Corps. In the spring, after the arrival of Lubomirsky Cavalry from Poland, Heister captured Sümegh, Veszprem and Simontornya on the right bank of the Danube. Meanwhile, Pálffy marched along the left bank. In the autumn, Heister also occupied the Castle of Gács and penetrated into the region of Zips (present-day Spiš/SK). The corps took up its winter-quarters in the Komitat of Neograd.

On 22 January 1710, the regiment participated in the Battle of Romhany, where Colonel Schuhknecht distinguished himself, leading the regiment in a successful flanking attack.

For the campaign of 1711, Count Sandor Károlyi took command of the Kuruc army. The regiment, then numbering nearly 1,000 men, was allocated to FM Pálffy’s Corps.

On January 5, Pálffy’s Corps reached Nagy-Körös and crossed the Theiß River (Tisza/HU) near Szolnok. On 31 January, Pálffy met Rákóczi. On 1 May, 10.000 Kurucs capitulated near Majtény and took the oath of allegiance to Emperor Charles VI. The Castle of Munkács, the last stronghold of the Kurucs, capitulated on 22 June. This was the end of Rákoczi’s Uprising. Two companies of the present regiment took their quarters in the Komitat of Barcs, and 10 in the Komitat of Poszony.

In 1712, the regiment was part of a corps of 11,000 horse, which remained in Hungary. On 19 May, this corps was present at the coronation ceremony of Charles VI in Pressburg. At that time, the proprietor of the regiment, Count Althann was campaigning with Prince Eugène in the Netherlands.

During winter, the regiment garrisoned Breslau (present-day Wroclaw/PL) but 6 companies were also stationed in Bohemia.

On 15 May 1713, Major-General Count Althann assumed command of a detachment (the present regiment, Rabutin Dragoons and Gronsfeld Cuirassiers) and marched to Germany. On 13 July, the detachment reached Oberhausen, where it made a junction with the troops of G.d.C Count Fels. In the autumn, Fels’ Corps defended the region of Schwarzwald. The regiment was part of the troops of the G.d.C Marquis Vaubonne, who were posted along the so-called “Schwarzwald Line.” Vaubonne could not defend the Line against the French and retreated to Rottweil. After the arrival of Prince Eugène, Maréchal Villars hesitated to continue his operations against the Imperial troops. In November, the regiment took up its winter-quarters in Swabian-Austria.

After the signature of the Treaty of Rastatt on 7 March in Rastatt was the regiment in spring sent to Philippsburg and went in October by Waldsassen, Bohemia to Hungary. Its garrison were at Kecskemét.

On 6 March 1714, after the Treaty of Rastatt between the Habsburg and the Bourbon, negotiations continued and Imperial troops were kept in readiness throughout the year. At the end of March, the regiment went from Hildesheim through the Sauerland to the County of Neuwied where it remained for several months. It then returned to Hildesheim where it spent winter. 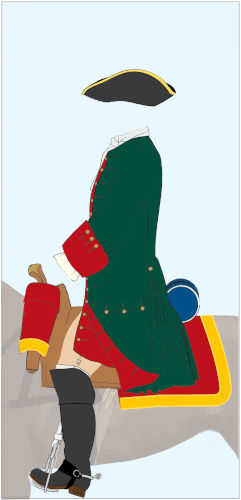 Uniforms of officers differed from those of the privates and NCOs by the finer material used. Buttons were gilt or silver-plated and golden embroideries decorated the cuffs, pocket flaps and saddle-cloth.

Drummers wore a special hat with a front flap and a uniform in reversed colours (red coat with green lining and green cuffs. 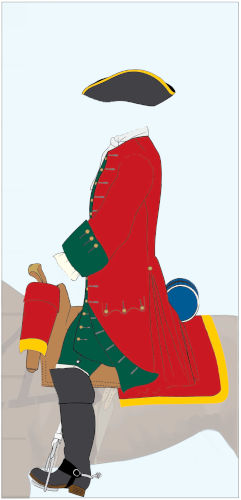 Uniforms of officers differed from those of the privates and NCOs by the finer material used. Buttons were gilt or silver-plated and golden embroideries decorated the cuffs, pocket flaps and saddle-cloth.

Drummers wore a special hat with a front flap and a uniform in reversed colours (green coat with red lining and red cuffs.