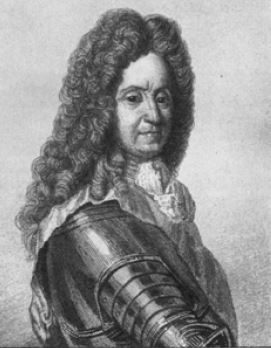 Camille d'Hostun Comte de Tallard started his military career as guidon in the Gendarmes Anglais of the Gendarmerie de France.

In 1672. at the outbreak of the Franco-Dutch War (1672–78), Tallard joined the army placed under the command of the Prince de Condé.

In 1674, Tallard served in Alsace under Turenne. On 11 August, Tallard distinguished himself in the Battle of Seneffe. He then received command of a corps which he led in the combats of Mulhaufein and Urchem.

In 1677, Tallard was promoted to brigadier. The same year, he married Marie-Catherine de Grolée

In 1683, Tallard took part in the siege of Courtrai.

In 1684, Tallard was at the siege of Luxembourg.

In 1693, Tallard was promoted to lieutenant-general.

Tallard was sent to London as ambassador for two years.

In 1701, at the outbreak of the War of the Spanish Succession, Tallard received command of a corps to conduct Operations in Germany. On 25 June, the Maréchal de Villeroy, appointed to command the Army of the Rhine, left Versailles and went to Metz where he met with M. de Tallard and made arrangements for the reinforcements (9 bns, 32 sqns) destined to the Moselle. At the beginning of July, Louis XIV ordered Tallard to assemble another French army on the Moselle. Accordingly, Villeroy sent 3 bns from Alsace to the Moselle where they would join 6 other bns to form Tallard's Corps on the Moselle. On 6 July, Tallard assembled his corps between Thionville and Sierck. His ovens were at Thionville. In August, when Villeroy was recalled to Versailles to receive command of the Army of Italy. Tallard replaced him as commander in Luxembourg. On 29 September, the king instructed Tallard to take his winter-quarters in Franche-Comté, Trois-Évêchés and Sedan in preparation to form the Army of the Rhine for the next campaign.

On 14 January 1703, Tallard was promoted to maréchal de France. During the campaign on the Rhine, he forced the Allies to abandon the siege of the Castle of Trarbach. He then served under the command of the Duc de Bourgogne and, in September, took part in the capture of Breisach and, in October, in the Siege of Landau. On 15 November, Tallard won the Combat of Speyerbach, a victory who forced the capitulation of Landau.

In July 1704, Tallard was sent at the head of 34,000 men to reinforce the Bavarian army of Elector Maximilian II Emanuel on the Danube. On his way, he unsuccessfully laid siege to Villingen. On 5 August, he finally reached Ulm where he effected a junction with a Bavarian army. On 13 August, he commanded the French army at the disastrous Battle of Blenheim where he was taken prisoner. He was then sent to Great Britain where he was housed on parole in Nottingham till November 1711.

During his imprisonment, Louis XIV granted Tallard the Government of Franche-Comté.

In 1717, Tallard became member of the Council of Regency but the Duc d'Orléans managed to have his nomination nullified.

In 1723, Tallard was admitted as honorary member of the Académie des sciences.

In 1724, Tallard was appointed president of the Académie des sciences.

In 1726, Tallard was appointed Minister of State.

N.B.: the texts on the period extending from 1700 to 1702 are mostly derived from our articles depicting the various campaigns, battles and sieges.