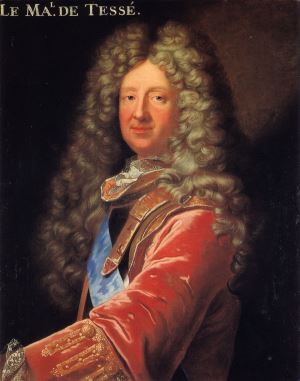 In 1674, René de Froulay, then Comte de Tessé, was authorised to raise Tessé Dragons. He then joined the Army of Roussillon where he served under the command of the Comte de Schomberg. On 10 June, Tessé married Marie Françoise Auber d'Aunay

In 1675, Tessé was placed at the head of the French cavalry during the expedition against Messina.

In 1685, the Comte de Tessé was charged to lead the dragonnades in the Principality of Orange in Southern France.

At the end of 1700, when the Duchy of Milan was threatened by the Imperialists, Louis XIV decided to send him 40 bns and 56 sqns under Lieutenant-General Comte de Tessé. These troops were instructed to assemble in Franche-Comté, in Dauphiné and in Provence. On 18 December, the Comte de Tessé set off from Versailles for Italy.

On 3 January 1701, Tessé arrived in Milan. After reconnoitring the country, he was of the advice that the Imperialists would choose the itinerary from Trento along the Adige to enter into Italy. On 11 March, the Prince de Vaudémont and the Comte de Tessé sent a courier to Venice to receive guarantees that the republic would remain neutral and would defend the passages in its territory. On 16 March, they sent 1,500 foot and 200 horse from Cremona towards Castiglione. The Comte de Tessé then visited the Senate of the Republic of Venice who assured him of the neutrality of their republic; of their willingness to prevent the passage of any foreign troops through its territory; and of their acceptance that French and Spanish troops could take dispositions to defend the entry in its territory. On March 27, Tessé wrote a letter to Louis XIV to expose him the position of the Republic of Venice. On his return to Desenzano, Tessé received intructions from Louis XIV authorising him to make himself master of Chiusa and of the boats of Lake Garda. At the end of March, Vaudémont and Tessé, with the authorisation of the Republic of Venice, inspected the course of the Adige up to Fort Croara and reconnoitred all passages between the Adige and Lake Garda. After their reconnaissance, they deployed their troops on the Mincio and then returned to Milan where they arrived on 30 March. In the night of 4 to 5 April, the Comte de Tessé advanced troops in front of Mantua, as if he intended to invest the place. This gave to the Duke of Mantua a good pretext to open the doors of the city. Tessé entered into Mantua with 7 bns and 6 guns. Another French battalion was sent to reinforce the garrison of Mirandola. On 7 April, Marshal Catinat arrived in Milan where he replaced Tessé as commander-in-chief of the Army of Italy. On 13 April, Catinat, and Tessé left Milan to inspect their future positions. At then end of May, an Imperialist army passed the Alps and entered into Northern Italy. On 29 June, Catinat, Vaudémont and Tessé held a council of war at Oppeano where they concluded that they should remain in their current positions until Prince Eugène's intentions become clearer. On 1 August, Vaudémont and Tessé were sent to Cremona and Milan to quell any uprising and to assemble the last troops arriving from France on the Adda. On 18 August, Tessé passed the Adda at Cassano and marched to Mirabella and Ricengo; and finally effected a junction with Catinat's army at Fontanella. At the end of October, Tessé seized Bozzolo on the Oglio. At the end of November, he retired to Mantua. He was then blocakded in this city by Prince Eugène's army.

In 1702, the Comte de Tessé successfully directed the defence of Mantua till its relief at the end of May. In October, M. de Zurlauben being sick, Tessé once more assumed command in Mantua.

In 1703, the Comte de Tessé was promoted to Maréchal de France.

In 1704, the Comte de Tessé was appointed commander-in-chief of the Army of Spain, replacing Berwick.

In 1705, Tessé was charged to join the Spanish force besieging Gibraltar. In mid-February, he arrived at Gibraltar and assumed direction of operations. On 26 February, a Franco-Spanish squadron sailed into the bay but the Allies soon sent a relief fleet who, on 21 March, defeated the besiegers' squadron at the Battle of Cabrita Point. At the end of April, Tessé lifted the siege. He then drove back an Anglo-Portuguese invasion.

In April 1706, Marshal Tessé laid siege to Barcelona but once more the arrival of an Allied relief fleet forced him to abandon the siege and to retire precipitously, leaving behind his wounded, artillery and ammunition. Tessé was then relieved from his command.

In August 1707, Tessé successfully led the defence of Toulon besieged by an Imperialist army under Prince Eugène de Savoie.

In 1708, Tessé was appointed ambassador at Rome.

In 1716, Tessé resigned from his charge of général des galères and joined the Navy Council.

In 1723, Tessé was appointed ambassador in Spain.

In 1724, Marshal de Tessé resigned from his charge of ambassador to the profit of his son.

The Comte de Tessé died on 30 March 1725, in his house of the Calmadules at Yerres near Paris.