Private of Thürheim Infantry - Source: detail from an illustration of Richard Knötel

On 29 May 1698, Emperor Leopold I issued an order to Colonel Franz Sebastian Count von Thürheim to raise an infantry regiment. Thürheim signed this document on 6 June 1698. Six companies from Metternich Infantry formed the kernel of this new regiment, the six additional companies (each of 150 men) should be enlisted in Upper Hungary. Enlistment went slowly. By the end of the year, only two companies had been completed and were assembled in Pressburg (present-day Bratislava/SK). During the same period, the six companies contributed by Metternich Infantry went to Nagy-Banya while the two new enlisted companies went to Ofen (present-day part of Budapest/HU).

During the War of the Spanish Succession, the successive effective commanders of the regiment were:

in February 1700, the regiment was concentrated at Szatmar, where it raised the four missing companies. By Summer, it counted 12 companies for a total of 1,800 men.

In 1701, the grenadiers of the regiment were assembled in a single company of 100 men, while the rest of the regiment was organized in 4 battalions, each of 4 companies of 150 men. The necessary new recruits were enlisted in Silesia.

Half the regiment garrisoned places in the Comitat of Hunyad in Transylvania while the other half was stationed in Hungary (at least in 1702).

In 1703, the regiment contributed two companies for the creation of Virmond Infantry.

In the Spring of 1704, 500 men of the regiment were attached to Rabutin’s Corps stationed in Transylvania. An entire battalion of the regiment seems to have deserted and joined the Hungarian Insurgents. Most of them were killed on 8 October in the Battle of Páta.

In November, 100 men of the regiment were allocated to the corps of Colonel Dillherr, which besieged Jockelsdorf (present-day Jakubov/SK) occupied by superior rebel forces. Dillherr’s artillery opened a lively fire on the village, then his troops stormed it, the rebels fled in panic. On its way back, Dillherr’s force was attacked by rebel cavalry led by Colonel Ocskay but Dillherr’s guns stopped the rebels again and this force arrived safely at Angern an der March (on the Austro-Slovakian border).

In 1705, the regiment (then counting only 6 companies) was allocated to Glöckelsberg’s Corps. On 16 September, it marched from Pest (present-day part of Budapest/HU) by way of Czegled, Csongrád, Szegedin and Debreczen, to Schibo. On 11 November, the 6 companies (1 battalion) of the regiment took part in the Battle of Schibo against the Hungarian Insurgents led by Rákóczi. After the victory, Glöckelsberg followed the retreating Insurgents to Szamos-Ujvár and stormed the castle. On 28 November, he made a junction with Rabutin’s troops at Karlsburg (present-day Alba Julia/RO).

In June 1707, some companies of the regiment were sent to Oedenburg to join the corps of G.d.C. Pálffy, Banus of Croatia.

At the beginning of 1709, 16 musketeer companies and 1 grenadier company of the regiment were deployed in Hungary, as part of Tollet’s brigade. On 9 April, one battalion and the grenadiers (a total of 5 coys) of the regiment defended the Castle of Liptau (present-day Liptov/SK) for several hours against 6,000 rebels, until the brigades of General Ebergényi and Viard came to their relief. Corporal Eckstein, who had deserted and served in Rákóczi’s troops was beheaded at Liptau.

In 1710, 7 companies were stationed in the region of Zips (present-day Spiš/SK) and 10 companies in Styria. The regiment then counted 2,180 men.

In 1711, after the surrender of Rákóczi’s troops, part of the Imperial troops were sent from Hungary to reinforce the army of Prince Eugène on the Rhine. However, the present regiment remained in Hungary.

In June 1713, the grenadiers of the regiment and the battalion of Lieutenant-Colonel Joachim von Schmiedinger marched from Szolnok through Austria to Durlach on the Rhine where they arrived on 1 August. The rest of the regiment remained in Szolnok and Munkács (present-day Mukačevo/UR).

During the year, Count Thürheim, the regiment owner, died. FML Philipp Ernst von der Lanckhen was appointed as the new proprietor of the regiment.

From 16 September, Lieutenant-Colonel Schmiedinger, with the grenadiers and his own battalion, was part of the garrison of Freiburg. FML Harsch commanded the place and the garrison comprised 7 grenadier companies, 16 battalions and 100 dragoons. The fortress was then besieged by the French Maréchal Villars with 140 battalions and 120 squadrons. During the siege, Schmiedinger and his men distinguished themselves on several occasions, suffering the loss of 233 men. On 16 November, Harsch finally surrendered with “military honour”.

After the signature of the Treaty of Rastatt, on 7 September, Schmiedinger marched with the remains of his force, through Bavaria, Bohemia and Austria to Erlau (present-day Eger/HU), where the whole regiment was assembled and another grenadier company raised.

The regiment remained in Erlau until 1716. Joachim Schmiedinger (now ranking as colonel) was killed in the Battle of Temesvár in 1716.

Armaments consisted of a musket, a bayonet and, as per Knötel, a sword. Grenadiers were also armed with hand grenades.

Uniforms of officers were always of finer cloth than those of the privates.

Unidentified colour (Leibfahne or Regimentsfahne): white field with red diagonal flames; white border decorated with silver grenades; centre device consisting of a crowned and armed Imperial double-eagle with the the initials of Emperor Joseph I "II" (Ioseph Imperator) on its breast 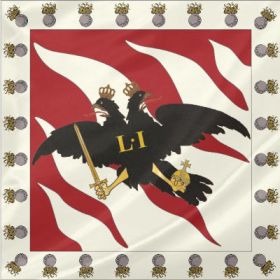 Harald Skala for the translation and integration of Schmedes’ book