This tercio of cavalry was raised in Flanders on 12 January 1676 by Nicolas Hartmant. The Venloo Dragoons contributed one squadron to the new tercio. The year of its creation, the tercio took part in the unsuccessful attempt to relieve Bouchain. In 1677, it took part in the Battle of Cassel and in the unsuccessful siege of Charleroi. In 1678, it fought in the Battle of Saint-Denis.

In 1683 and 1684, the tercio took part in operations against the French in the Spanish Netherlands and in the Duchy of Luxembourg.

On 31 March 1701, all Spanish dragoon tercios serving in the Spanish Netherlands were reorganised along the lines of the French dragoon regiments at the request of the Maréchal de Boufflers.

The successive colonels of the tercio/regiment were:

On 10 June 1702, the regiment engaged the British cavalry as the Allies were retreating towards Nijmegen.

In 1703, the regiment formed part of the army under the command of the Duc de Bourgogne who campaigned on the Rhine. In October, it participated in the Siege of Landau. On November 15, it fought in the Combat of Speyerbach where it was deployed on the right wing. On November 17, Landau surrendered.

In 1704, the regiment was part of the auxiliary corps sent to reinforce the Maréchal de Tallard in Bavaria. On 13 August 1704, it fought in the disastrous Battle of Blenheim where it suffered heavy losses.

In 1705, the regiment was assigned to the Army of Germany under the Maréchal de Villars who took position in the Lines of Wissembourg.

In 1706, the regiment was transferred to the Spanish Netherlands. On 23 May, if fought in the Battle of Ramillies.

In 1707, the regiment once more joined the Villars' army operating in Germany. On 22 May, it took part in an attack on the Lines of Stollhofen.

In 1708, the regiment returned to the Spanish Netherlands where it served under the command of the Duc de Bourgogne. On 5 July, it fought in an engagement against the Dutch. On 11 July, it took part in the Battle of Oudenarde.

On 11 September 1709, the regiment fought in the Battle of Malplaquet

In 1710, the regiment evacuated the Spanish Netherlands and marched through France to Catalonia. On 10 June, it joined the army encamped at Balaguer. On 13 June, it was forced to retire to Belcayre and Bellmunt; and on 14 June, between Ibars and Berbens. On 30 June, it was attached to a corps under the command of the General Baron de Huart who was sent to reinforce the Spanish troops fighting the rebels in the Rivagorza region. At the end of July, the regiment retired to Roussillon with the rest of Huart's force. It later took part in the siege of Gerona.

In 1711, the regiment was posted on the right wing of the first line. When Gerona surrendered, on 25 January, the regiment was detached under the command of General Marquis de Arpajou in the mountains of Aragon and Catalonia. In August, this force captured the Castle of Arenys, taking the Austrian General Schower prisoner. The division then marched on Benasque and Castell-Ileó who surrendered in mid-September. For the rest of the year, the regiment secured mountain passes for the convoys.

In 1712, the regiment continued to occupy the region of Rivagorza.

In 1713, the regiment was posted in the mountains.

In 1714, the regiment was allocation to a corps under General Don Feliciano de Bracamonte who pursued the insurgents in the mountains, attacking them at Ripoll. It then completed the pacification of Catalonia. 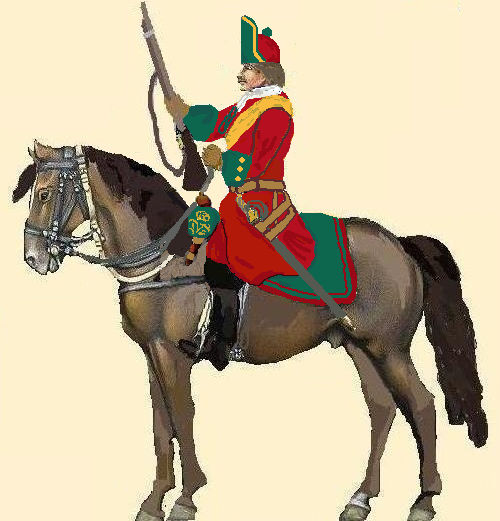 Troopers were armed with a sword, two pistols and a musket.

Tentative reconstruction of the guidons in 1705, using the coat of arms of the Napolitan House of Acquaviva d’Aragona with fleurs de lys to show their allegiance to the Bourbons.

Ordonnance Guidons (carried by all other squadrons): crimson field