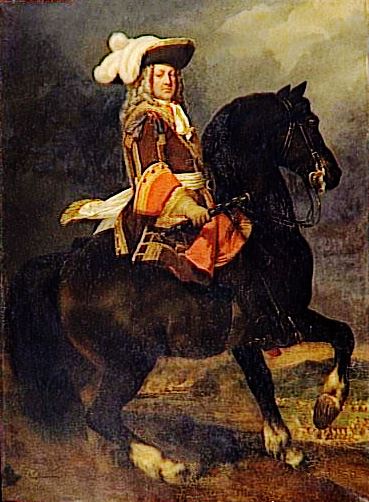 Louis Joseph de Vendôme was the son of Louis 2nd Duc de Vendôme and Laure Mancini; and the great-grandson of Henry IV and Gabrielle d'Estrées.

In 1669, Louis Joseph succeeded to his father as Duc de Vendôme. The same year, he became Governor of Provence. Like his grandfather César de Vendôme was a notorious homosexual.

At the outbreak of the Franco-Dutch War (1672–78), in 1672, Vendôme entered the army and soon distinguished himself by his vigour and personal courage.

In 1688, Vendôme was promoted to lieutenant-general.

During the Nine Years' War (1688–97), Vendôme rendered conspicuous service under Luxemburg at the Battle of Steenkerque (3 August 1692) and under Catinat at the Battle of Marsaglia (4 October 1693). In 1695, Vendôme was placed in command of the army operating in Catalonia where he took Barcelona. Soon afterwards, he was made maréchal de France and viceroy of Catalonia.

During the War of the Spanish Succession (1701–1713), on 10 February 1702, after the first unsuccessful campaign of Catinat and Villeroy, and the capture of the latter, Vendôme was sent from France to replace Villeroy as commander of the Franco-Spanish army in Italy. During three ensuing campaigns in that country he proved himself a worthy antagonist to his cousin Prince Eugène de Savoie.

On 18 February 1702, Vendôme arrived at Milan where the Prince de Vaudémont had his headquarters. On 27 February, Vendôme arrived at Cremona where he took command of the army. At the end of March, he made a diversion in the Duchy of Parma. In May, he forced Prince Eugène to lift the blockade of Mantua. At the end of May, Vendôme captured the town of Castiglione. He then made preparations for an offensive on the right bank of the Po which he launched in mid-July. On 15 August, he fought an inconclusive battle against Prince Eugène at Luzzara. In September, Vendôme's army captured Guastalla. In November, they took Borgoforte. At the end of December, they captured Governolo. During this campaign, Vendôme met Giulio Alberoni who became his lover.

In 1705, Vendôme defeated Prince Eugène at the Battle of Cassano (16 August) where his magnificent courage and command over his troops, converted the defeat that his indolent brother, the Grand Prior, had incurred into a glorious success.

In 1706, after winning the Battle of Calcinato (19 April), Vendôme was sent to Flanders to repair the disaster of Ramillies with the result that his successors Marsin and Philippe d'Orléans were totally defeated, while in the new sphere Vendôme was merely the mentor of the pious and unenterprising Duc de Bourgogne, and was unable to prevent the defeat of Oudenarde. He therefore retired in disgust to his estates.

In 1710, Vendôme married on of his cousins Marie-Anne de Bourbon, Mademoiselle de Montmorency, the daughter of Henri Jules de Bourbon-Condé and of Anne of Bavaria. This union remained childless. The same year, he was summoned to take command of the army of King Philip V of Spain. On 8 December, he won the Battle of Brihuega and two days later, on 10 December, the decisive Battle of Villaviciosa, thus crowning his work.

Before the end of the war, on 11 June 1712, Vendôme died suddenly at Vinaros.

Vendôme was one of the most remarkable soldier in the history of the French Army, and second only to Villars amongst the generals of France of the 18th century. He had, besides the skill and fertile imagination of the true army leader, the brilliant courage of a soldier. But the real secret of his uniform success was his extraordinary influence over his men.

This article is mostly adapted from texts of the following books which are now in the public domain:

N.B.: the section describing Vendôme's service in 1702 is mostly derived from our articles depicting the various campaigns, battles and sieges.