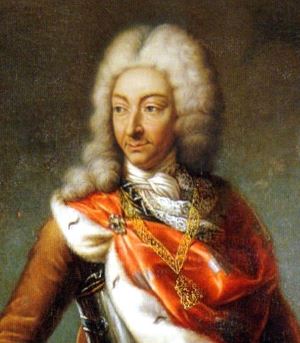 Victor Amedeus, born in 1666, was the son of Duke Charles Emmanuel II and Jeanne de Savoie-Nemours.

In 1675, Victor Amedeus lost his father and spent his youth under the regency of his mother, known as "Madama Reale" (Madame Royale), an able but ambitious and overbearing woman.

In 1682, at the age of sixteen, Victor Amedeus assumed the reins of government and married Princess Anne, daughter of Philip d’Orléans and Henrietta of England, and niece of Louis XIV, king of France. That sovereign was determined to dominate the young duke of Savoy, who from the first resented the monarch's insolent bearing.

In 1685 Victor Amedeus was forced by Louis XIV to persecute his Waldensian subjects, because they had given shelter to the French Huguenot refugees after the revocation of the Edict of Nantes. With the unwelcome help of a French army under Marshal Catinat, Victor Amedeus invaded the Waldensian valleys, and after a difficult campaign, characterized by great cruelty, he subjugated them. Nevertheless, he became more anxious than ever to emancipate himself from French thraldom.

In 1687, Victor Amedeus visited Venice where he conferred on political affairs with Prince Eugène de Savoie and other personages, without consulting Louis XIV. About this time the duke plunged into a whirl of dissipation, and chose the beautiful but unscrupulous Contessa di Verrua as his mistress, neglecting his faithful and devoted wife.

Louis XIV having discovered Victor's intrigues with the emperor, tried to precipitate hostilities by demanding his participation in a second expedition against the Waldensians. The duke unwillingly complied, but when the French entered Piedmont and demanded the cession of the fortresses of Turin and Verrua, he refused, and while still professing to negotiate with Louis XIV, joined the league of the Holy Roman Empire, Spain and Venice.

In 1690, war was declared. On 18 August, in spite of his great courage and skill, Victor Amedeus was defeated by the French under Catinat at the Battle of Staffarda. Other reverses followed, but the attack on Cuneo was heroically repulsed by the citizens.

The war dragged on with varying success, until 4 October 1693 when the Allies were severely defeated at the Battle of Marsaglia. Afterward, their selfish neglect of Victor Amadeus's interests induced him to open negotiations with France once more. Louis XIV agreed to restore most of the fortresses he had captured and to make other concessions.

In 1696, a treaty was signed with France and Victor Amadeus appointed generalissimo of the Franco-Piedmontese forces in Italy operating against the imperialists.

In 1697, by the treaty of Ryswick, a general peace was concluded.

In 1700, on the outbreak of the War of the Spanish Succession, Victor Amedeus was again on the French side.

In 1701, Victor Amedeus allowed French troops to march through Piedmont towards the Duchy of Milan. Furthermore, he engeged himself to supply 8,000 foot and 2,500 horse from this duchy. For his part, Louis XIV consented to the marriage of the Princess of Savoy with King Philip V of Spain. However, Victor Amedeus managed to delay the departure of his contingent until June. On 25 July, he finally joined the Franco-Spanish Army at Goito, assuming nominal command with Marshal Catinat as second-in-command. At the beginning of August, they fell back on the Oglio. On 1 September, Victor Amedeus, now seconded by Marshal de Villeroy attacked Eugène in the Battle of Chiari. Eugène's troops were deployed in well entrenched positions and the Franco-Piedmontese were thoroughly defeated, with a loss of some 3,000 men to Eugène's 150. On 17 November, the Duke of Savoy quit the Franco-Spanish army with his entire contingent, marching back to his duchy before the end of the campaign.

In March 1702, Victor Amadeus promised that he would contribute 5,000 men to the Franco-Spanish army for the incoming campaign, These troops would march at the beginning of May. On 5 May, these troops marched from Vercelli. On 12 November, after a successful campaign under the command of Marshal Vendôme, the Piedmontese contingent marched back to the Duchy of Savoy.

In 1704, the insolence of Louis IV and of Philip V of Spain towards him induced Victor Amedeus to join the Grand Alliance against France. At first the French were successful and captured several Piedmontese fortresses.

In 1706, after besieging Turin, which was skilfully defended by the duke, for several months, the French were completely defeated by Victor Amadeus and Prince Eugène de Savoy, and eventually driven out of the other towns they had captured.

In 1713, by the Peace of Utrecht, the Maritime Powers conferred the kingdom of Sicily on Victor Amedeus, whose government proved efficient and at first popular. But after a brief stay in the island he returned to Piedmont and left his new possessions to a viceroy, which caused much discontent among the Sicilians.

In 1718, when the Quadruple Alliance decreed that Sicily should be restored to Spain, Victor was unable to offer any opposition. The same year, Victor Amedeus lost his queen.

In 1720, Victor Amadeus had to content himself with receiving Sardinia in exchange of Sicily.

In 1730, much against the advice of his remaining son and heir, Carlino (afterwards Charles Emmanuel III), Victor Amedeus married the Contessa di San Sebastiano, whom he created Marchesa di Spigno, abdicated the crown and retired to Chambéry to end his days. But his second wife, an ambitious ‘’intrigante’’, soon tired of her quiet life, and induced him to return to Turin and attempt to revoke his abdication. This led to a quarrel with his son, who with quite unnecessary harshness, partly due to his minister the Marquis d'Ormea, arrested his father and confined him at Rivoli and later at Moncalieri; there Victor Amadeus, overwhelmed with sorrow, died on 31 October 1732.

Victor Amedeus, although accused not without reason of bad faith in his diplomatic dealings and of cruelty, was undoubtedly a great soldier and a still greater administrator. He not only won for his country a high place in the council of nations, but he doubled its revenues and increased its prosperity and industries, and he also emphasized its character as an Italian state. His infidelity to his wife and his harshness towards his son Carlino are blemishes on a splendid career, but he more than expiated these faults by his tragic end.

N.B.: the texts on the period extending from 1700 to 1708 are mostly derived from our articles depicting the various campaigns, battles and sieges.