The regiment was raised in 1704 from Alt-Daun Infantry and from 5 companies of Hasslingen Infantry for General Johann Adam Count von Wendt.

In the Spring of 1708, Ferdinand Albert II Prince von zu Braunschweig-Wolfenbüttel in Bevern asked to the Hofkriegsrat (the court war council of the Habsburg Monarchy) for the authorisation to raise one of these two new infantry regiments. The Emperor informed Prince Eugène de Savoie of his intention to allow the Prince von Bevern to become proprietor of a regiment and recommended to use three to four companies from more senior regiments to form the kernel of the new unit. Unfortunately, there were not enough soldiers in the army at that time, and Prince Eugène refused to part with experienced troops. However, negotiations continued to create the new regiment.

Finally, on 13 February 1709, the Prince von Bevern received a decree for the creation of a regiment which should count 12 fusilier companies and one grenadier company, for a total of 1,660 men. The prince planned to enlist his new regiment in Bavaria. However, the Habsburg Monarchy was far from being popular in Bavaria and enlistment proceeded very slowly. The Hofkriegsrat finally accepted that, by the end of June, only one battalion of 5 company and the grenadiers would be reviewed. The Prince of Bevern was not even able to fulfil this more modest requirement and started negotiations with GFWM de Wendt, who was at that time proprietor of a regiment garrisoning in Hungary. De Wendt accepted to transfer 12 fusilier companies and one grenadier company to the regiment of the Prince von Bevern at the condition that the latter would reimburse him enlistment costs. On March 9, Emperor Joseph I accepted this agreement and the Prince of Bevern inspected his new soldiers at Pressburg (present-day Bratislava/SK). Johann Count Trautson von Falkenstein, formerly general-adjutant and captain of a company in Baden Infantry was appointed as lieutenant-colonel and effective commander of Bevern's regiment while Heinrich Baron Calisius de Calisch, formerly from Salm Infantry was appointed major.

During the War of the Spanish Succession, the proprietors of the regiment were:

Colonel-commanders during the War of the Spanish Succession:

After the war, until 1716, the regiment garrisoned various places in Hungary.

At the end of February 1710, the regiment, under the command of Lieutenant-Colonel Count Trautson was involved in the capitulation of Leutschau and was praised by GFWM Löffelholz in his report to FZM Heister. Afterwards, Löffelholz unsuccessfully besieged Eperies (present-day Prešov/SK) before retiring to Leutschau. A detachment of the regiment remained in Leutschau until November while the main body participated in actions against Bartfeld (present-day Bardejov/SK) and Eperies under the command of GFWM Count Virmond. The regiment then took its winter-quarters in various places in Upper Hungary (Slovakia). Even then, the regiment was incomplete, some companies counting only 50 men instead of 130.

In March 1711, the regiment joined the forces besieging Kaschau (present-day Košice/SK). After the capitulation of this town, the regiment, along with other troops, was placed under the command of FM Pálffy who laid siege to Munkács and Unghvár. In June, Munkács capitulated, putting an end to Rákóczi Uprising. During the same year, the regiment received 678 recruits enlisted by the estates of Lower Austria and two complete companies contributed by Löffelholz Infantry and Sickingen Infantry. In accordance to the new regulation, the regiment now counted 15 fusilier and two grenadier companies. Three years afters its creation, it had finally reached full strength.

Between 1 November 1711 and April 1712 the regiment garrisoned the following places:

In 1712, the proprietor, Albrecht Prince of Bevern, asked to Prince Eugène to transfer his regiment from Hungary to the Army of the Rhine. Even though he was personally allowed to join this army where he assumed command of a brigade, his regiment remained in Hungary, garrisoning various places and saw no action. At the end of July, the regiment received 413 recruits from Silesia. In then counted 1,738 men (excluding staff).

On 10 May 1713, one battalion (695 men including 94 grenadiers) of the regiment set off from Hungary and marched to the Rhine under the command of Lieutenant-Colonel Count Trautson. During the march, Trautson left for Vienna entrusting command to Captain Reichart Count Losberg. On 20 July, this battalion, along with two battalions of Jung-Daun Infantry and Lancken Infantry, arrived at the camp of Grabe. In August, these three battalions were attached to FML Vaubonne's Corps. On 31 August, they reached Hornberg. This corps was afterwards sent to Freiburg which was besieged by the Maréchal de Villars. On 8 October, Lieutenant-Colonel Trautson led a sortie and destroyed some French trenches. Trautson's younger brother, who served as volunteer in the regiment, was then sent to carry a message to FML Harsch about this successful sortie. On 1 November, the defenders of Freiburg were forced to retire into the castle Freiburg. On 17 November, the fortress finally surrendered. Its garrison was allowed to leave with the honours of war. During this siege, the battalion lost a total of 209 men. It then rejoined Vaubonne's Corps at Rottweil. Count Trautson was later promoted colonel. During this campaign, 11 companies had remained in Upper Hungary where they had garrisoned various places.

In mid April 1714, the battalion previously serving on the Rhine marched from the Black Forest to Hungary, embarking aboard boats at Donauwörth to sail on the Danube.

According to Czegka, in 1716 the Hofkriegsrat enquiried to all regiments to know how to accoutre recruits with the proper uniform before sending them to their unit. For the present regiment, the following uniform is described:

Uniforms of officers were always of finer cloth than those of the privates. 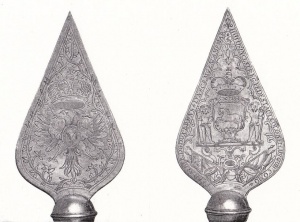 Harald Skala for the revised and improved version of this article