At the beginning of July 1757, during the invasion of Hanover, the French Army of the Lower Rhine under the Maréchal d'Estrées had successfully crossed the Weser River. After retiring in front of this superior French army for two weeks, the Duke of Cumberland decided to make a stand and selected a strong defensive position between the fortified City of Hameln and the Obensberg Hill.

After reconnoitring the Allied positions, the French determined that they prevented any frontal assault. D'Estrées then decided to attack their left flank. The task was assigned to M. de Chevert with a screen of light troops, and the brigades of Picardie, Navarre and La Marine, to which was added the brigade d'Eu, initially under M. de Randan. 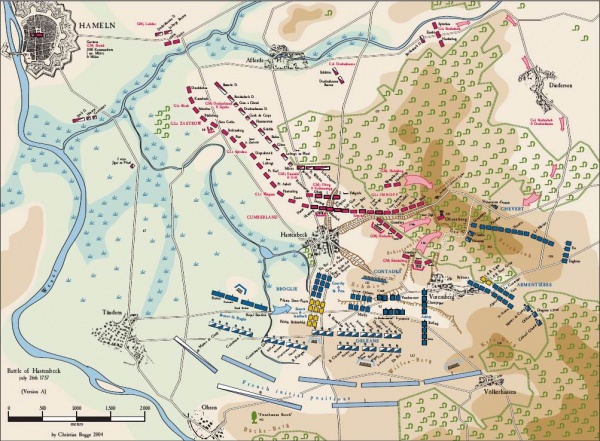 The Allied army had its right at Hameln covered by a brook and a marsh and its left anchored on the woods and heights of Apserte with a strong detachment on the Obensberg. This part of the Allied position was supported by batteries and a redoubt.

The French army was assembled on the heights of Ohsen, its left reaching the Weser. There was an impracticable marsh in front of the French left. On the Allied side, it was protected by a plateau where Cumberland had established guns. The village of Hastenbeck was in the centre.

At 9:00 p.m. on July 25, Chevert started his long flank march towards the Allied left flank. The 12 grenadier companies formed the head of the column, followed by 4 guns, Picardie (4 bns), Navarre (4 bns) and La Marine (4 bns). Chevert advanced up to the village of Varonberg where he turned right into sunken roads in the woods.

During the night march, there was some confusion in Chevert's ranks. Navarre Infanterie mistakenly continued its advance directly on the village of Varonberg. The Marquis de Valfons stopped it when it was almost in contact with the enemies first outposts. The regiment retraced its step to join La Marine Infanterie to the left of Picardie Infanterie.

At 2:00 a.m. on 26 July, Chevert's entire corps had reached the plateau. Later on, d'Estrées sent Eu Brigade to reinforce Chevert's Corps before its assault on the Allied left. However, the brigade got lost in the dark.

A considerable fog raised at daybreak and the armies could see each other only at 5:30 a.m. The Allies then began a cannonade which was feebly answered while the French still awaited M. de Chevert's signal.

At 9:00 a.m., using battalion columns, Chevert launched his attack on the Allied left flank in the woods. When the sound of the engagement was heard, the French army began its general advance while the artillery opened a devastating fire. The right of the Allied position attacked by Chevert was anchored on a steep rock more than 12 m high. This obstacle just inside the wood was securing its right and rear. Big oak trees stood in front of the Allies and between these trees other fallen oak trees formed formidable breastworks. A very dense wood completed the position. Repulsed from this initial position, the Allies retired on a second height, having a ravine in front of them.

D'Armentières advanced on the right with the brigades of Belzunce, La Couronne and Alsace, supported by the Austrian Brigade and by dismounted dragoons. His objective was to attack the Allied redoubt and batteries.

Contades at the head of the Orléans, Vaubécourt, Lyonnais and Mailly brigades began a slow advance towards the ravines between the Obensberg and the village of Hastenbeck.

The first line of the left wing infantry, led by MM. de Guerchy and de Saint-Pern, also began a slow advance in 3 columns against the village of Hastenbeck.

The difficult terrain chosen by Cumberland to make his stand did not allow the French cavalry to charge. So d'Estrées assigned it to support the infantry. It was to debouch into the plain once the main infantry attack had taken place.

However, d'Armentières slightly modified the direction of his advance and got entangled in the woods. This manoeuvre mixed up the general order of battle. The situation was corrected by launching the reserve under M. d'Anlézy (Champagne and Reding brigades) against the redoubt. Champagne attacked a battery of 8 guns. It fell into disorder at the first salvos. However, it soon rallied and captured the battery.

Around 10:00 a.m., the woods on the right became the focal point of the battlefield while the rest of the field belonged to the French artillery who made superior execution. Navarre Infanterie stormed the second position occupied by the Allied units on their extreme left flank. Chevert continued to make gains against the enemy flank. Meanwhile, the Champagne and Alsace brigades captured the redoubt and Reding brigade covered the edge of the woods.

Meanwhile, Chevert had cleared the woods in front of him and ordered his corps to advance into the plain, taking the Allied redoubts in rear. However, de Lorge, commanding the Eu Brigade, did not obey orders and remained on the plateau.

The French cavalry now had ample room to deploy into the plain to support the general advance. However, the Grenadiers de France received the quite surprising order to withdraw into the village of Hastenbeck.

Indeed, d'Estrées had realized that the Allies were moving troops from their left through the woods. An intense firefight could be heard. Three Hanoverian battalions under Hardenberg had managed to take the isolated Eu Brigade in flank, utterly routing it and causing heavy losses. Hardenberg now master of the plateau used abandoned guns to fire on Chevert's right in the plain. Simultaneously, Hardenberg launched a few Allied squadrons in the gap created on the French right. Furthermore, d'Estrées was wrongly informed by the Comte de Maillebois that a force of some 10,000 Allies was actually turning his right flank. D'Estrées immediately ordered all his light troops to retreat to the camp to protect it and he sent almost all of his cavalry and an infantry brigade to plug this hole in his lines. Orders were issued to all the infantry to halt its advance and to the artillery to move back. However, these orders did not originate from d'Estrées... The Royal-Pologne Brigade which was debouching in the plain on the French left flank was also ordered to stop in front of retreating Allied units. These confusing orders, the movements that they caused and the disordered French infantry retreating in front of the Allied counter-attack interrupted all other attacks for almost 2 hours.

This pause in the combats gave the Allies the opportunity to begin an orderly retreat across the Hameln River.

The French cavalry finally restored the situation. Fire from the wood had ceased and dust clouds indicated that the Allies were retreating from those parts. Realizing that he had been misinformed, d'Estrées decided to resume the attack of the Grenadiers de France, supporting it with the Royal-Carabiniers and the Royal Pologne brigades who had now debouched into the plain.

By this time, the Allies continuing their retreat had already passed the small creek at Afferde, burning their camp upon leaving it.

At 6:00 p.m., the Allied army was out of sight. D'Estrées sent troops to follow them up to the village of Afferde. But, seeing that the enemy was retreating in good order and being master of the battlefield, he encamped his army and simply pushed a detachment to cover Hameln.

The French captured 9 guns, 2 howitzers and a few prisoners, among which a major-general and 2 officers. The losses of the Allies amounted to some 1,420 men (300 killed, 900 wounded, 220 taken prisoners) while the French lost 1,500 men killed or wounded. The Marquis de Laval, aide maréchal général des logis, was killed while M. du Châtelet and M. Belzunce were wounded.

Throughout the day, the French artillery under the supervision of Vallière had performed outstandingly.

The French victory eventually led to the Convention of Klosterzeven whereby Cumberland agreed to disband his army and to allow French to occupy Hanover.

Detachment on the Weser

Detachments in and near Hameln (Hanoverian)

These figures are given according to the information in Grosser Generalstab. They are based on a “plan” of the French camp on the battlefield in the afternoon of July 26 “…listing all regiments by name and in strength of 70 bns and 63 sqns. To this force, the troops of Broglie's Reserve (8 bns and 12 sqns) which recrossed the Weser River the same day, 2 bns of the Grenadiers Royaux de Solar, the 4 bns brigade d'Alsace, that are not listed as with d'Armentières force, but took part in the battle, and 8 sqns from Randan's Reserve and d'Armentières's vanguard would have to be added” – all apparently detached. “This gives a strength of 84 bns and 83 sqns for the French army” … (incl. 2 bns of artillery).

Cavalry generals are speculative, though based on fragmentary record elsewhere – no confirmation on the commands here. Cavalry regiments and brigading should be exact at about 80%, that of the infantry near 100%.

N.B.: most sources, except Jomini, agree with the German Grosser Generalstab on the total force of the French Army.

Artillery under M. Jean Florent de Vallière (in front of the center and right wing of the army)

Relation of the battle of Hastenbeck by an anonymous French officer