The campaign took place in September 1757

At the beginning of 1757, the French were very busy in fitting out two great fleets at Brest and Lorient.

The latter end of March and the beginning of April, several British squadrons were equipping at Portsmouth and Plymouth.

A large British fleet under Sir Edward Hawke was lying off Brest harbour to observe the French fleet. Despite all these precautions, a French squadron got out of Brest and another one from Lorient. The French squadron under the command of M. de Beaufremont consisted of 15 ships of the line and 5 frigates and convoyed some 5,000 men for the West-Indies. The other French squadron set sail for the East-Indies.

In July, a certain Captain Clarke, who was familiar with the harbour and fortifications of Rochefort, was ordered to communicate his observations to Sir John Ligonier. After receiving intelligence on the distribution of French forces, the ministry realised that very few troops could be spared for the defence of the French coastal places. It then resolved to undertake an expedition against Rochefort which contained a most valuable dockyard, arsenal, and foundry.

At the beginning of August, Sir Edward Hawke received orders to collect a fleet at Spithead. The land forces taking part to the expedition were under the command of Lieutenant-General Sir John Mordaunt (seconded by Major-Generals Conway and Cornwallis) and assembled at a camp of the Isle of Wight. The instructions to Sir Edward Hawke were "to attempt, as far as it shall be found practicable, a descent on the coast of France, at or near Rochefort, in order to attack and, by vigorous impression, force that place; and to burn and destroy to the utmost of his power all such docks, magazines, arsenals and shipping as shall be found there". Lorient and Bordeaux were also considered as potential but secondary targets for this raid.

It seems that the secret was not perfectly kept, since, on August 23, the French Minister of Navy advised the intendant of the harbour of Rochefort that the British were planning an expedition against a French harbour, probably Brest, and inviting the intendant to take measures to guard Rochefort.

The British land force consisted of

These units were embarked on board 45 transports which were escorted by a fleet of warships:

On September 5, the British regiments stationed on the Isle of Wight began to embark aboard transport vessels.

On September 6, the transports joined the warfleet at Spithead.

On September 8, the British expeditionary force sailed, but its destination was not known, nor even suspected, by any with it, except the chiefs. 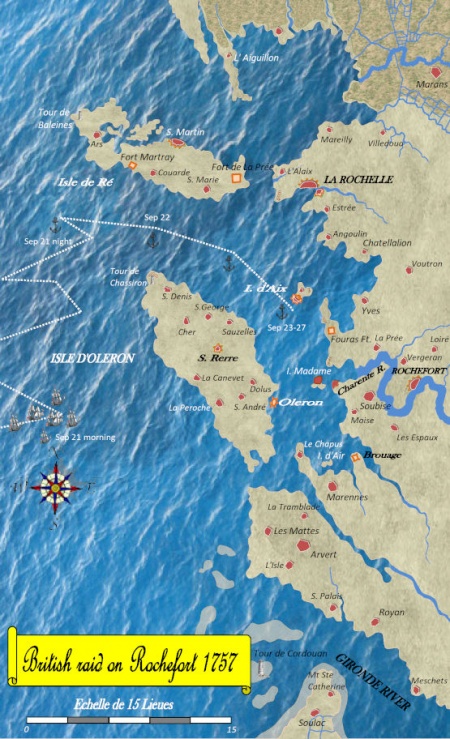 On September 14, the alteration of course towards the Bay of Biscaye finally revealed the destination of the British fleet.

On September 19 at 8:00 p.m., the British fleet was instructed to stall. It then resumed its advance after a pause of 8 hours.

On September 20, the British fleet was in sight of the Isle of Ré. Sir Edward Hawke issued orders to Vice-Admiral Knowles, directing him to attack Isle d'Aix. At noon, Vice-Admiral Knowles proceeded to execute these directions; but, in doing so, he chased a two-decked French ship, which escaped into the Garonne at about 3:00 p.m. and gave the alarm. The British fleet then approached the Isle of Oléron on the Bay of Biscay over against Rochefort.

Militia of the coastal parishes were called to arm and distributed among the coastal batteries. Furthermore, land forces assembled under the command of Maréchal Henri de Sennectère and occupied all threatened points:

Furthermore, 2 ships of the line were placed at the mouth of the Charente behind a merchant vessel ready to be sunk in the channel; and the Volontaires Étrangers (3 bns for a total of 2,000 men) were recalled from the camp of Saint-Mathieu.

N.B.: the figures given for this latter unit seem very high, by 1757, the third battalion was serving in Germany.

When it became clear that the British efforts would be directed against Rochefort, Versailles decided to send the Gardes Françaises (4 bns) and Gardes Suisses (2 bns) to the relief of the harbour.

On September 21, the British fleet advanced up to the Isle of Oléron but the wind changed and it was forced to anchor.

On September 22, with the absence of wind, the British fleet barely managed to advance between the Isles of Oléron and Ré.

Early on September 23, the vanguard of the British fleet came in sight of the little Island of Aix at the mouth of the river leading up to Rochefort. Vice-Admiral Knowles with the Neptune (90), Magnanime (74), Barfleur (90), Torbay (74), Royal William (100), and two bombs, the Firedrake (12) and Infernal (8), attacked the works on Aix. These works were half-finished and were defended by 30 artillery pieces and 600 men of the Saint-Maixent Militia. Around noon, the Magnanime (74) as she approached the fort first received its fire (8 guns and 2 mortars). However, she continued to bear down on the fort and dropped her anchors within 40 meters of its walls. She then opened a devastating fire, well seconded by the Barfleur (90). In half an hour the position surrendered, the militiamen becoming prisoners of war. The island was taken possession and soon became “a most shocking scene of devastation, even the church was suffered to be pillaged.” The defensive works of the island were later destroyed. In the meantime vessels were sent to reconnoitre, and to sound for a suitable place of disembarkation on the mainland but it was discovered that a landing in any case would be difficult, and that, if opposed, it could scarcely be effected. The French now feared of a landing on the Coast of Fouras and, at 7:00 p.m., transferred Royal Dragons from Rochefort to Fouras. M. de Rhuis, chief-administrator of the harbour, and the Comte de Goesbriant, the commander of the place, had sent the archives and their personal belongings inland.

On September 25, General Mordaunt called for a council of war aboard the Neptune (90) to decide about a landing to attack Rochefort. The council, held by the British admirals and generals, lasted from morning till late at night. Everybody agreed that the landing could be done but that the place could not be stormed.

On September 26, the admiral advised the general that the fleet would move to another place if the general did not decide to undertake some actions.

On September 28, General Mordaunt called for another council of war where it was resolved that a landing would be done at night, in spite of the fact that the French, who had been very active, were then better prepared than ever. Some 62 pieces from 8-pdr to 36-pdr were now mounted on the ramparts of Rochefort. Nevertheless, disposition were made for the landing, under Admiral Broderick.

On September 29, a British bomb-ketch moved close to the Fort of Fouras and fired 5 bombs which fell a good distance from the fort. MM. Beaumanoir and Féron, commanding 2 gunboats equipped with 14-pdrs, advanced against the bomb-ketch. The British immediately sent a frigate to protect the bomb-ketch as she retired towards the fleet. The same day, the Gardes Françaises (4 bns) and Gardes Suisses (2 bns) finally left Paris and started force marches towards Rochefort. However, these reinforcements could not reach Rochefort before October 12.

On September 30 at night, part of the British troops were already in the boats since 2 or 3 hours when instructions were issued to postpone the landing to the next morning. Sir Edward Hawke then sent to know of Sir John Mordaunt if he had any further military operations to propose. He also informed Mordaunt that, otherwise, he intended to proceed to Great Britain. Mordaunt and his generals officers agreed to return home.

On October 1, the fleet sailed for Great Britain.

On October 2 in the morning, the French camp was lifted, Hallwyl Infanterie returning to Rochefort.

On October 6, the British expeditionary arrived at St. Hellens. The collapse of the expedition, and the waste of money, which its mismanagement by the government had entailed, caused grave public dissatisfaction.

Investigation into the Causes of the Failure

On November 1, George II appointed a board of general officers to enquire into the causes of the failure of the expedition.

On November 12, the board met but did not come to any precise conclusion.

On December 3, George II appointed a court martial for the trial of Sir John Mordaunt. The court martial met from December 14 to 20 and came to the conclusion that Mordaunt was not guilty and acquitted him.

Letter of Lieutenant-Colonel James Wolfe to his uncle

Jean-Pierre Loriot for supplying additional sources on this expedition