At the beginning of July 1757, during the Austrian invasion of Silesia, the Prince of Prussia had to gradually retreat towards Silesia in front of superior Austrian forces. From his main camp at Böhmisch-Leipa (present-day Ceska Lipa), he secured the small town of Gabel (present-day Jablonné v Podještědí) giving access to country roads leading to Zittau. The Prince of Prussia intended to retire with his entire army to Gabel but Frederick II expressly forbid it to him.

On July 14, the Austrian main army under Prince Charles and Daun was at Niemes (present-day Mimoň), not above 6,5 km from the prince's eastmost outpost. Simultaneously, a couple of advanced parties under Beck and Maquire hovered on the Prince of Prussia's flank in the direction of Zittau, while Nádasdy was pushing on to rear.

The same day (July 14) at daybreak, Major-General von Puttkamer left the camp of the Prince of Prussia at Böhmisch-Leipa with empty wagons, escorted by I./Kalckreuth Fusiliers, II./Alt-Württemberg Fusiliers and 50 men from Puttkamer Hussars, to bring back from Zittau a provision of flour for ten days.

The convoy had not yet reached Reichstadt (present-day Zákupy) when it began to be harassed by cavalry and hussars belonging to Beck's Corps (1,200 men from Paul Anton Esterházy Hussars and Morocz Hussars). Furthermore, approx. 2,800 Grenzer light troops advanced from Götzdorf (unidentified location) on Reichstadt and Dobern (present-day Dobranov) as the convoy approached. Puttkamer formed a Wagenburg with his convoy while the escort advanced against the Grenzer light troops.

Beck's Corps took refuge on the height of Voitsdorf already occupied by part of the Austrian Reserve Corps. Hearing the firefight from Böhmisch-Leipa, the Prince of Prussia had immediately sent reinforcements towards Reichstadt. They consisted of 3 bns (Grenadier Battalion Carlowitz (?), 1 bn of Münchow Fusiliers and 1 bn of Hülsen Infantry) and 5 sqns (Normann Dragoons) under Lieutenant-General von Lestwitz. However, Puttkamer had resumed his march and Lestwitz followed him up to Brims (present-day Brniště) before returning to Böhmisch-Leipa. 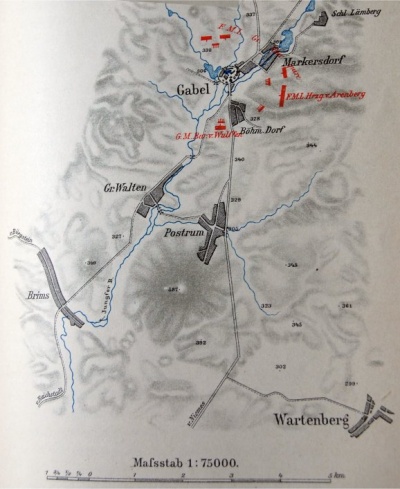 Map of the combats around Gabel in July 1757.

Gabel, a little walled town surrounded by heights, was an important magazine for the Prussians. It could be reached only from north and south. The post also secured the line of communication of the Prince of Prussia with Zittau in Lusatia. For these reasons, Field-Marshal Daun had resolved to make himself master of this town. For this task he appointed FML Maquire, against the will of some generals.

From July 10, Major von Belling had fortified Gabel which was now well defended against a sudden attack. His troops had dug wolf-pits around the stone wall of the village and converted the monastery and church into redoubts. His forces consisted of Grenadier Battalion Alt-Billerbeck and Grenadier Battalion Möllendorff who together barely formed a single bn and 6 sqns of Werner Hussars.

Belling, expecting an attack, then sent out 5 sqns of Werner Hussars under Major von Owstien, hoping that they could reach Böhmisch-Leipa by secondary roads. He kept only one sqn with him. 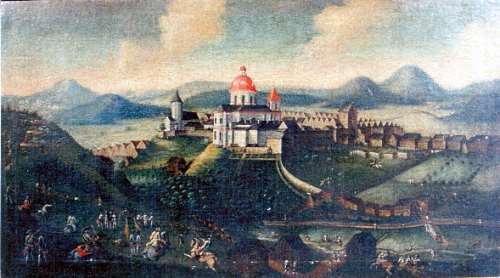 The storming of Gabel on July 15, 1757 - Source: Museum of Jablonné v Podještědí, photo made available by H. Skala

On July 14 in the morning, an Austrian detachment (200 hussars and 200 men of the Serbelloni Cuirassiers) under Cuirassier Captain von Deym took positions on the heights near Böhmischdorf (present-day Česká Ves), a suburb of Gabel. The cuirassiers dismounted and took off their cuirasses (thus explaining why some sources describe them as dragoons).

On July 15 around noon, Maquire, seconded by GFWM von Wilfenblied (?), appeared on the heights to the north and east of Gabel with the Austrian vanguard and planted his artillery.

At 1:00 p.m., Puttkamer, arriving from Brims, bumped into Maquire's troops. Puttkamer's guns immediately opened against them but they were no match for the Austrian artillery established on the surrounding heights. Puttkamer soon realized that he could not save his convoy and decided to abandon the 100 wagons and to seek refuge in Gabel with the escort. He then assumed command, replacing Belling. He decided to resist, hoping that a relief force would be sent from Böhmisch-Leipa as soon as Major von Owstien would have informed the Prince of Prussia of the situation.

Even before Puttkamer's arrival, Belling had already rejected Maquire's summon to surrender the town. As soon as Puttkamer's troops were inside, the Prussians manned the walls and gates. An Austrian battery established to south-east of Gabel started to bombard the place while another fired on the southern gate and a few cannons opened on the northern gate.

Maquire did not lose time in the construction of entrenchments and immediately prepared an assault on the small town, deploying his troops in two lines.

About 6:00 p.m., Maquire launched an assault on Gabel northern gate which had been destroyed by artillery and Major von Normann at the head of 6 grenadier companies entered into the town through this breach. They were met by lively musket fire from the defenders and by grapeshot from their artillery. Violent hand to hand fighting ensued in the street of the town where the Prussians gained the upper hand. At nightfall, the Austrians were forced to retire from the town after losing some 200 men including 107 grenadiers who were taken prisoners.

In the evening, Maquire was reinforced by Arenberg who brought with him 12 additional heavy guns.

At noon on July 16, Arenberg's additional guns guns opened on Gabel until 3:00 p.m.

By 3:00 p.m., the walls were breached in several locations. Some defenders deserted to the Austrians through these breaches. The inhabitants began to make common cause with the Austrians and to fire at the defenders. At that point the Prussians had lost only 2 officers and 34 men killed or wounded but they had nearly exhausted their ammunition.

Another assault was then launched against Gabel with new forces. This time the grenadiers were led by Captain Andreas Prince Poniatowski. During the assault, he was wounded in the neck and had to be carried out of town, but then returned and resumed fighting, receiving four more wounds.

The Prussians retired into the strong monastery where they were able to hold on.

By this time, Puttkamer knew that Major-General Beck and Morocz had reached Brims and Walten (present-day Valtinov) with their troops and that he could expect no help from the Prince of Prussia. Nevertheless, he did not hoist the white flag before the defenders had run out of ammunition.

Puttkamer tried to negotiate free-withdrawal for his troops but the Austrian staff rejected this clause and Puttkamer's force (67 officers and 1833 privates and NCOs) had to surrender as prisoners of war. The captured officers were allowed to retain their side-arms, horses and carriages. The Austrians also captured 220 horses, seven 3-pdr battalion guns and much supply, including 400 loaded forage-wagons.

After the capture of Gabel, Morocz and Beck were instructed to harass the flank of the army of the Prince of Prussia during its retreat while Hadik would follow it. To occupy Gabel, the Austrians left only a strong detachment of hussars.

Overall, the Austrians lost 3 officers and 486 men dead and wounded in the action at Gabel; Prussian losses are unknown. There were about 3,100 Prussians in the town at the beginning of the action. During the bombardment of the town, 36 men (2 officers and 34 men) were killed.

For her outstanding behaviour during the storming of Gabel, Captain Prince Poniatowski and Major von Normann received the the Knight's Cross of the Maria Theresa Order.

The high road to Zittau was now open to the Austrians.

Several Austrian corps surrounded Gabel. Altogether, they totalled some 12,000 men. However, most of them were not directly involved in combat. Only troops listed directly under FML Maquire took part in the storming of the place.

Reinforcements (left before the final assault)

This article is mostly based on Harald Skala's article Rückzug des preussischen Heeres nach der Schlacht bei Kolin 1757, der Fall von Gabel und Zittau which he has kindly authorised us to translat and incorporate into our own article

Harald Skala for the present version of this article