After his defeat in the Battle of Kolin in June 1757, Frederick II of Prussia had given up on the invasion of Bohemia and lifted the Siege of Prague. He had then gradually retired into Northern Bohemia where he planned to "eat the country" until mid or end of August before continuing his retreat to Lusatia or Silesia.

On June 24, Frederick splitted his army in two corps: one corps under Prince Moritz marched northward while Frederick remained Alt-Lissa (present-day Lysá nad Labem/CZ) in Bohemia with another.

On June 28, Prince Moritz reached Jung-Bunzlau (present-day Mladá Boleslav/CZ), some 50 km north of Alt-Lissa, at the confluence of the Iser and Elbe rivers. He asked Frederick if he should retreat to Zittau in Southern Saxony because of the numerous Austrian light troops harassing his camp. Upon receipt of this request, Frederick immediately recalled Moritz and appointed the Prince of Prussia to go and take command.

On July 1, the Prince of Prussia arrived at Jung-Bunzlau where he took command of Moritz's former corps (about 30,000 men).

When the Austrians moved against his army, the Prince of Prussian retreated towards Lusatia, constantly harassed by Austrian troops.

Since the fall of Gabel, Colonel von Diericke from Sers Fusiliers, who commanded at Zittau, was daily expecting an Austrian attack. Diericke posted his light guns at the best positions and cleared their line of fire. Zittau was a very important Prussian magazine which, including 900 four-horse wagons kept inside the town, could supply 40,000 men for a period of three weeks. 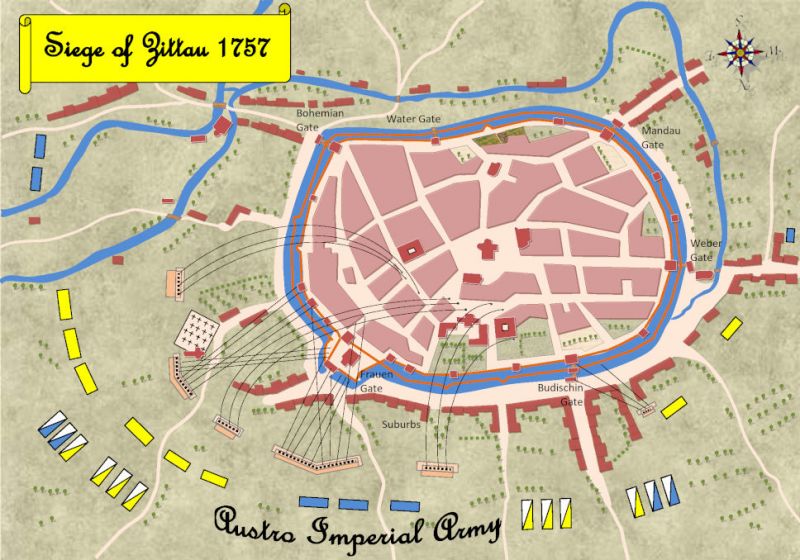 Zittau - The Rich, the surname was reminiscent of old times when Zittau was a rich trading town due to its location on important commercial roads. In 1346, Zittau was among the Lusatian towns which formed the "Six Towns League". This league had enough funds to pay mercenaries to secure their trade.

The city heavily depended on the heavily frequented route from the Adriatic Sea by way of the Balkans, Bohemia and further towards the Baltic Sea for its prosperity because it was advantageously located at the easiest crossing over the mountain ridge of the "Sudeten", which separates Germany from Bohemia.

After the Peace of Prague, Zittau lost massively in importance due to the new border. 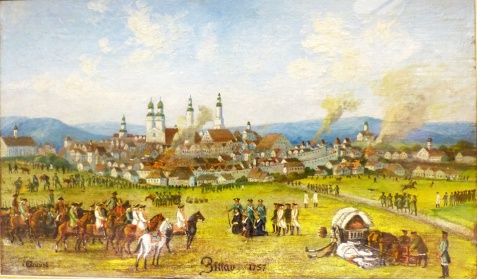 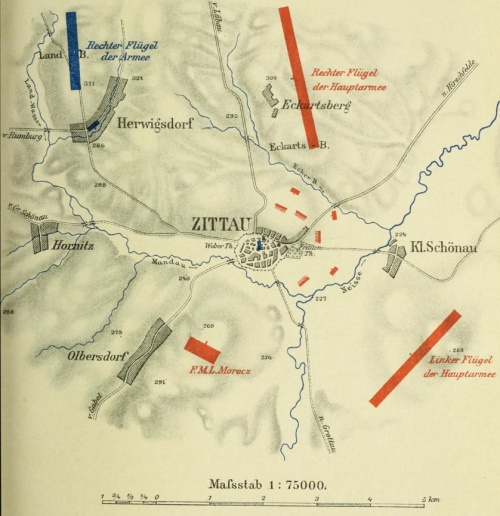 On Saturday July 23, it rained heavily. At about 11:00 a.m., from his fully established batteries (12 x 6- or 3-pdr guns, 6 x 12-pdr howitzers, 6 x 6-pdr howitzers, 4 x 3-pdr howitzers) on the Eckartsberg (mainly in the churchyard of the"Zur Lieben Frau"), Colonel Waldenau fired red-hot balls upon Zittau. By noon, half the town was in flames. The Prince of Prussia then sent a detachment (Major-General Rebentisch with 3 bns) to get some food from the magazine at Zittau, but it arrived too late and came back empty handed. Colonel von Diericke, commanding what was left of the garrison, was withdrawing to join the Prussian army when he was ordered to defend Zittau to the last man. Accordingly, he re-entered the town. Prince Charles summoned the place once more. Diericke asked for more time to consult the Prince of Prussia and sent him an adjutant. After waiting for an hour, the Austrians resumed the bombardment of the place. Bombardment ceased around 5:00 p.m. But the town was now completely afire. It was impossible for the homeless inhabitants to remain in the streets, so they tried to take refuge in the already damaged Frauentor. Those who tried to flee from the burning town were intercepted by patrols of Austrian cuirassiers, dragoons and hussars who robbed them of their belongings. Prussian soldiers also started to desert. Major-General Ludwig Baron von Buttler at the head of 1,000 converged grenadiers was preparing to storm the town but this became unnecessary. Finally, around 4:00 p.m., Colonel Diericke learned that most of Grenadier Battalion Bähr (a former Saxon unit) had mutinied and surrendered. Soon afterwards, he hoisted the white flag and capitulated with his garrison. Colonel Diericke, Major-General Kleist, 10 officers and 240 men of I./Markgraf von Brandenburg Fusiliers and Sers Fusiliers (which lost five colours) became prisoners of war (several soldiers had however managed to escape before the capitulation). By sunset, Zittau was but a cinder-heap, its 10,000 inhabitants homeless. However, the magazines were not yet hurt. The Austrians then sent 2 infantry regiments (Carl Lothringen and Harsch) under Major-General Buttler to bring the blaze under control. Nevertheless, fire still raged all night and destroyed two third of the houses.

According to an article published in the "Erlanger Zeitung" (August 13, 1757), on July 23 between 11:00 a.m. and 5 p.m., the Austrian artillery fired around 4,000 cannonballs or shells on the town. Overall , 547 small houses and 104 patrician houses burned down, both churches were destroyed as well as all towers. Furthermore, the town hall with its entire archives was razed. From the inhabitants, 90 died in the cellars, 50 more in the streets. After this disaster, people from all countries of the monarchy contributed money to rebuild the town. Maria Theresa granted 30,000 fl. for the same purpose.

On Sunday July 24, the Austrians sent detachments from 15 regiments, (each of 1 officer and 40 men) into Zittau to extinguish fires and maintain order. They managed to save large quantities of flour and powder.

Today, as a result of the near-complete destruction of the city, the only signs of the past prosperity of Zittau are a few exceptional buildings.

This article is mostly based on Kronoskaf relation of the 1757 - Austrian invasion of Silesia from which texts related to this siege have been transferred to the present article.

Dinos Antoniadis for the research, map and initial version of the article