N.B.: in France the battle is known as the bataille des Cardinaux, the Cardinaux being a group of reefs to the east of Belle-Isle.

In 1759, the French planned invasions of various parts of Great Britain. The main effort would come from a force under the command of the duc d'Aiguillon which assembled at Vannes in Bretagne to be convoyed to Ireland by a fleet under M. de Conflans and M. de La Clue. The latter was intercepted on August 18 on his way from Toulon and defeated at the battle of Lagos. Conflans for his part was blockaded in the harbour of Brest till late in the Autumn.

On November 9, a violent gale of wind forced Hawke from his station near Brest and obliged him to put into Torbay.

On November 14 at 11:00 AM, seizing the opportunity, de Conflans put to sea from Brest and sailed for Vannes in 3 divisions, each counting 7 ships of the line. Beaufremont commanded the vanguard; de Conflans, seconded by Guébriant de Budes, the main division; and Saint-André-du-Verger the rearguard. Conflans planned to crush Duff's small British squadron blockading the harbour and then to escort the vessels transporting French troops (about 17,000 men) to Ireland. The same day, Hawke got under way from Torbay.

As soon as it became known in Great Britain that the French had sailed from Brest, the excitement was great and every effort was made to meet the situation. Rear-admiral Geary was detached with a reinforcement of ships for Hawke.

On November 20, Hawke finally caught up with Conflans' fleet in the bay of Quiberon in front of Vannes. 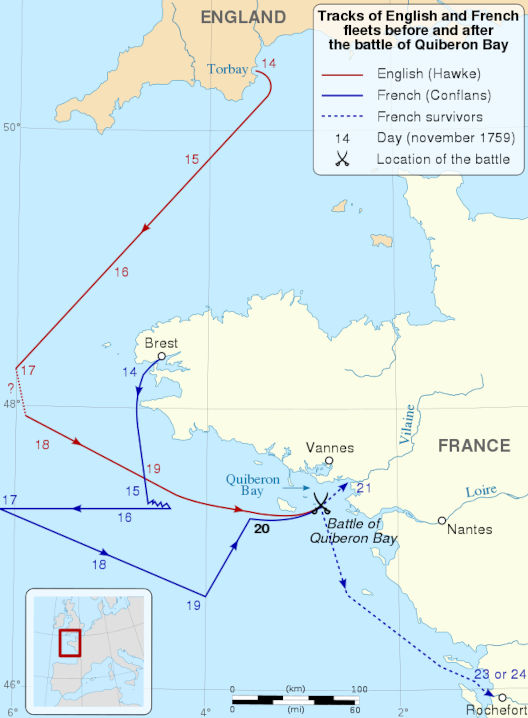 Early in the morning of November 20, Hawke ordered the Maidstone (28) ahead to make the land.

The same day in the morning, Duff was informed that the Brest fleet had put to sea by captain Nightingale of the Vengeance (28). Nightingale on entering the bay had fired guns to alarm the commodore. Duff realised at once the danger that was upon him and immediately made the signal for his ships to cut their cables. In a few minutes they were all under way. He attempted to take them out to sea round the north end of Belle Isle but, the wind shifting, the Belliqueux (64), captain Thomas Saumarez, was the only one which escaped by that passage. She was not able to rejoin until 3 days after the battle. Duff then tried to escape by the south end of the island and, in doing so, he was observed by de Conflans, who made the signal to chase. The Chatham (50), which sailed very badly, was almost within gunshot of a French 74, when a man on the main-top-gallant yard of the Rochester (50) hailed that he saw a sail and, presently, that he saw a fleet. The commodore quickly made out what the fleet was and at once ordered his little squadron to tack and chase the enemy. At first the French were puzzled by this change of policy but, as soon as de Conflans discovered the cause, he recalled his chasers and Duff's squadron was thus enabled in the course of the day to join sir Edward Hawke.

At about 8:30 AM, the Maidstone (28) signalled that she had sighted a fleet bearing to northward between the island of Belle Isle and the mainland.

At 9:45 AM, the Magnanime (74) announced that the fleet sighted was the French fleet. The French were at that time relinquishing the chase of the commodore's squadron and Belle Isle bore E. by N. 1/4 N.

Hawke instantly made the signal for a line of battle abreast, in order to draw up his ships. He then followed it soon afterwards with the signal for the 7 ships which were nearest the enemy to chase, draw into line of battle ahead of him and endeavour to arrest the French until the remainder of the fleet could get up and bring about a general engagement.

Upon realising that they were in the presence of the British, the French fell into some confusion but, in the course of a short time, seemed to arrive at a determination to fight and endeavoured to form a line. While they were executing this manoeuvre, the British approached very rapidly, the wind being then nearly west. De Conflans then suddenly altered his mind and, instead of waiting to engage, made off. He was near his own coasts, with the difficulties and dangers of which he was fully acquainted and presumably knew well how to avoid, while the British were on a lee shore, with which they were unfamiliar. The weather was tempestuous and was rapidly growing worse and the November day would soon end.

De Conflans therefore endeavoured to keep his fleet together and steered right before the wind for the land, which was not more than about 19 km distant.

The wind, as the short afternoon drew to its close, was variable between N.W. and W.N.W. and blew in heavy squalls. Yet both fleets crowded sail, the French to escape and the British to overtake them.

At 2:00 PM, the French rearguard began to fire at the leading ships of the British fleet.

At 2:30 PM, when the Warspite (74) and Dorsetshire (70) were close up with the enemy's rear, Hawke made the signal to engage. The British fleet was then to the south of Belle Isle. A little later the Revenge (64), Magnanime (74), Torbay (74), Montagu (60), Resolution (74), Swiftsure (70) and Defiance (60) got into action, and hotly engaged the French rear. Yet this fact did not prevent the French admiral, who was in the van, from leading round the Cardinals reefs. The Magnifique (74) sustained the first attacks and fought for an hour before being forced to disengage.

The Formidable (80), carrying the flag of rear-admiral du Verger, was attacked by the Resolution (74) and, in addition, received a broadside or two from every other British ship that passed her.

The French Superbe (74), who had opened his lower deck ports, foundered at about the same time.

About 3:30 PM, de Conflans, who had for an hour continued to retire towards the far end of the bay with the vanguard, finally turned round.

About 4:00 PM, the Formidable (80), having been severely treated, struck. The loss on board of her was terrible, M. du Verger and upwards of 200 others being killed. The Formidable (80) was taken possession of by the Resolution (74). In the meantime, the ships of the British rear were straining to get into action. The Thésée (74) was hotly engaged by the Magnanime (74) but was relieved by the disablement of the British ship which, being fouled by one of her consorts, fell astern. Very soon afterwards the Thésée (74) was tackled by the Torbay (74) and, in the contest which resulted, she capsized and foundered, chiefly owing to the fact that her captain, from motives of self-pride, persisted in fighting his lower deck guns, regardless of the stormy state of the weather. All her crew of about 800 men, except 20, were lost. The Torbay (74), owing to similar causes, was at one time in danger of a like fate but captain Keppel closed his ports in time and saved her.

Owing to the gale, the lee shore, and the gathering darkness, there was at that time great confusion; and it is almost impossible to tell exactly what happened. But it would appear that after having engaged the Thésée (74) and having been fouled first by the Warspite (74) and then by the Montagu (60), lord Howe, in the Magnanime (74), observed the French Héros (74) somewhat disabled to leeward and, bearing down and ranging alongside, quickly obliged her to strike. The Héros (74) anchored but, owing to the weather, no boat could be sent to take possession of her. Later, the captain of the Héros (74) ran her ashore and landed his crew.

As night fell, the French fleet divided: part, under M. de Beaufremont, the vice-admiral, making to the southward within the Four Banks and probably designing to attract the British into danger. But Hawke would not be tempted to pursue them. Night was come; islands, rocks, and shoals were all around; no pilots were on board; the charts were indifferent, and the weather was terrible. Therefore, Hawke made the signal to anchor and came to in 15 fathoms of water, the Isle de Dumet bearing E. by N. 4 km distant, the Cardinals W. S., and the steeples of Le Croisic S.E., as was discovered in the morning.

Unfortunately, Hawke's signal was not taken in and, consequently, was not obeyed, by many ships of the British fleet. According to the code then in use, the signal to anchor by night was made by firing two guns from the flagship, without using lights or any other indications to distinguish the particular purpose for which the guns were fired. At a moment when there was still a certain amount of firing going on on all sides, the discharge of two guns from the flagship could of course not be recognised as a signal except by the few vessels which chanced to be so near the admiral as to be aware that he had anchored. The others either stood out to sea or anchored, as prudence suggested. Had the French only known the dangerous position in which the unsatisfactory nature of the signal book had left their enemy during that stormy night, they might, in the morning of November 21, have attacked the small body remaining at anchor near Hawke, and perhaps have won a decisive and complete victory by the mere strength of superior forces.

The night was dark, and even more boisterous than the evening had been but, though guns of distress were heard from all sides, it was not possible to send assistance to anyone. In the obscurity overnight, de Conflans's flagship, the Soleil-Royal (84), had come to anchor in the very midst of the British.

On the morning of November 21, the Resolution (74) was seen to be wrecked ashore (she had grounded on the Four Shoal during the night) and the French Héros (74) was on the Four Bank. When the Soleil-Royal (84) perceived her situation, she slipped her cable and tried to get away but presently went ashore near the town of Le Croisic. No sooner was she observed to be in motion than Hawke signalled the Essex (64) to slip and pursue her but in the ardour of the chase the Essex (64) unfortunately got on the Four Bank and was also wrecked. It was seen that, while the French vice-admiral had gone to the southward with part of the fleet, the remainder had stood to the N. and was engaged in the mouth of the river Vilaine in getting out guns, stores, etc., and endeavouring to find a haven up the river.

On November 22, Hawke sent the Portland (50), Chatham (50) and Vengeance (28) to set the Soleil-Royal (84) and Héros (74) on fire. The French, however, anticipated him by themselves burning the former. Hawke sent home his dispatches by captain John Campbell.

On the British side the number of men killed in the action did not exceed 50 and only about 250 were wounded.

Neither Geary nor Saunders had been able to join Hawke before the battle. Geary arrived several days too late and Saunders, hearing of the issue of the action, altered his course and steered again for England.

Summary: 26 ships of the line, 7 frigates

Summary: 21 ships of the line and 4 frigates

N.B.: crew indicated for the French vessels represents the theoretical strength not the actual one. Some 1,715 men from Saintonge Infanterie and of the Grenadiers Royaux d'Ally as well as 2,735 men from the Coast Guards of Bretagne and Normandie had been incorporated to the regular crews to reach strengths similar to the theoretical number. However, quantity did not make for quality!