The campaign lasted from May to December 1760. This article describes the second phase of the campaign from April 29 to July 10, 1760.

The unusually long campaign of 1759 had severely depleted the ranks of the Allied army. Great Britain decided to reinforce its contingent operating in Germany. Initially only 3 dragoon rgts were supposed to leave for Germany. but gradually this force was increased to 10 bns, 15 sqns and 2 artillery coys. These reinforcements added to the 12,255 men already quartered in Germany would bring the British Contingent to 17 bns, 29 sqns and 3 artillery brigades for a total of 23,327 men. However, most of these reinforcements could not reach the army until June and July, and the 3 Guard bns, only at the end of August.

The British also paid for the creation of a "Légion Britannique" of 5 bns, each of 4 infantry coys and 1 dragoon sqn. They were recruited in Göttingen, Einbeck, Lemgo and Soest. At the beginning of June, the légion would already number 2,750 men. Several of them were German and Swiss deserters from the French Army or from the Saxon Contingent.

Duke Ferdinand also established a Pioneer Corps of 3 brigades, each of 50 men. These men were recruited in the mountainous region of Harz. Each brigade also had 3 wagons transporting portable bridges. The pioneers were accompanied by 50 hussars.

The death of Landgrave Wilhelm VIII of Hesse-Kassel on January 31, 1760, initially worried King Frederick and Duke Ferdinand. Even though the new Landgrave Friedrich II was a Prussian general, he was known to be inconstant and had converted to Catholicism, and his alliance seemed doubtful. Accordingly, Ferdinand deliberately distributed Hessian troops into small group for their winter-quarters, so that he could keep them under control in the midst of the other contingents. Furthermore, Great Britain increased its subsidies to the Hessian Contingent and King Frederick promoted the new landgrave in the Prussian Army despite his lack of experience.

Landgrave Friedrich II then began to reorganise his small army on the model of the Prussian Army. He also established the I. Bataillon Garde and 1 sqn of Garde du Corps. After negotiation with Great Britain, the Hessian Contingent operating with the Allied Army was increased by 3,392 men to reach a total of 22.404 men. Each of the 12 Hessian infantry rgts, which previously consisted of 950 men in 10 weak coys, received 200 additional men and was reorganised in 2 bns, each of 4 fusilier coys and 1 grenadier coy. As in the Prussian Army the 2 grenadier coys of each of the 12 regiment were converged to form 6 grenadier bns. A seventh converged grenadier bn was formed with the grenadier coys of the 4 garrison bns. Each coy of cavalry and dragoons received 10 additional men and the Leib-Regiment was renamed Gensdarmes Regiment. The Hussar Corps was increased to 4 sqns of 120 men each and 2 sqns of Mounted Jägers of 195 men each were established.

Hanover increased the number of his light troops: the Luckner Hussars were augmented to 4 sqns; and the Jäger Corps, to 3 brigades (each of 2 mounted coys and 2 foot coys). The Stockhausen Freikorps received 2 mounted coys. Altogether, the Hanoverian Contingent numbered 37,833 men.

The Duke of Brunswick, who had signed a new subsidies contract with Great Britain, added the II./Zastrow Infantry, which had previously been stationed in his duchy, the new grenadier bns, the Carabinier Regiment (3 sqns), the Roth Hussars and a new Jâger Corps to his contingent, which now totalled 9,505 men.

The Prussian Contingent for this campaign comprised only the Freibataillon Trümbach, 3 sqns of Ruesch Hussars and 2 sqns of Malachowski Hussars. Frederick had already recalled the 2 Prussian dragoon rgts, which had served with the Allies in 1759, to his own army.

At the beginning of June, Ferdinand was at the head of an army of 98 bns and 112 sqns for a total of 74,700 men. His artillery, excluding battalion guns, numbered 146 pieces. After the arrival of the British reinforcements on June 20, Ferdinand's Army numbered 80,000 men, excluding the artillery.

The French field army was suffering from an increasingly acute shortage of money, which was impeding its operations. The Duc de Broglie had to use all his influence to convince the Court to supply the most necessary funds.

The regiments of the field army slowly received recruits, who had been assembled in Strasbourg and Hanau. Other regiments (including the 6 bns of the Gardes Françaises and Gardes Suisses) arrived from France to relieve the weakest units.

In May, the Duke of Württemberg retired his contingent from the French army and joined the Reichsarmee in Saxony.

Preparations for the campaign

As the good season approached, Ferdinand considered that the French could advance by way of Giessen to Marburg just as easily as along the Fulda and Werra rivers. He decided to assemble his main force in a camp on the Eder near Fritzlar and to wait until the direction of the French offensive would become clear. If the French would launch their offensive by way of Giessen, he planned to stop them on the upper Lahn and Ohm rivers. Meanwhile, a small army under General von Spörcken would cover Westphalia.

The Allies had constituted large magazines at Münster, even transporting part of the magazines from Paderborn to this new location.

In May, the promised British reinforcement (6 regular battalions, 2 regiments of Highlanders) were shipped to the Weser instead of, as heretofore, to Emden, and seem to have been despatched with commendable promptitude.

On May 5, the British quartered in the Country of Osnabrück took the field.

On May 12, the last British division made its junction with the Allied main army near Paderborn. Altogether, the new British units sent to the continent consisted of:

On May 14, the Allied army left its quarters and assembled at Paderborn.

By May 15, the Allies were working on the fortifications of Münster and Lippstadt.

Broglie assembled his main army (101 bns, 94 sqns) between Hanau, Frankfurt and Friedberg. Prince Xavier of Saxony (aka Prince de Lusace) was posted in the vicinity of Lohr and Gemünden with 21 bns and 26 sqns to secure Broglie's right flank. Lieutenant-General Comte de Saint-Germain commanded the "Reserve of the Lower Rhine" (35 bns, 38 sqns) which assembled on the Lower Rhine at Düsseldorf, Wesel and Kalkar.

On May 20, Ferdinand's Army left its cantonments The main army (67 bns, 78 sqns with an artillery park of 102 pieces for a total of approx. 31,000 men) under Ferdinand marched towards Hessen. in two columns and encamped near Fritzlar, with its headquarters in Wabern.

Meanwhile Broglie concentrated his cantonments towards Hanau and Frankfurt. The French plan called for the main army to to invade Hessen-Kassel while a corps of 20,000 men (also called right reserve) under Prince Xavier would operate on its right flank. Prince Xavier's right reserve consisted of 19 bns, 20 sqns, the Légion Royale, Volontaires du Hainaut, and Volontaires d'Austrasie.

At about this time, the Württemberger Contingent (about 9,000 men) quit the French service and marched for Swabia.

The Chasseurs de Fischer, which were now attached to Saint-Germain's Army, took position on its flank at Erbefeld (probably Elberfeld).

On May 27, Broglie stopped Guerchy's Corps at Hachenburg and Siegburg. Similarly, Prince Xavier's Corps was halted at Lohr.

On May 28, Lieutenant-General von Gilsa detached the Hessian Colonel von Wolff with 1,100 foot and 580 horse towards Fulda to raise contributions.

On May 29, a party of Ruesch Black Hussars appeared near Fulda and M. d'Apchon, who occupied Johannisberg, retired.

On May 30, Wolff's detachment engaged a grenadier coy of Dauphin Infanterie, which was still in Fulda, and captured it before retiring towards Schlitz. Wolff's rearguard suffered some casualties.

Around the end of May, French detachments advanced towards Giessen and Marburg. Furthermore, Saint-Germain with the Army of the Lower Rhine was posted at Kaiserwerth on the Rhine. An Allied corps under the command of Spörcken encamped opposite Saint-Germain at Dülmen.

At the beginning of June

On June 4, Saint-Germain concentrated his forces at Düsseldorf, Cologne and Andernach while Prince Xavier took position on the left bank of the Saale between Hammelburg and Gemünden. On this date, the French army, about 147,000 men strong, was deployed as follows:

In June, Great Britain sent 2 more regiments of cavalry (15th Eliot's Light Horse and 7th (Queen's Own) Dragoons to join its contingent operating with the Allied Army, making up a total of close on 10,000 men sent as reinforcement that very year.

On June 7, Broglie sent reinforcements to Prince Xavier in the County of Fulda.

On June 9, the Hereditary Prince arrived at Schlitz.

On June 11, the artillery of the Saxon Contingent and Navarre Brigade reached Gelnhausen while 2 French dragoon rgts took position between Gelnhausen and Büdigen and the Volontaires Étrangers (Volontaires d'Austrasie or Volontaires de Clermont-Prince) between Birstein and Wächtersbach. The same day, M. de Lillebonne sent 2 dragoon rgts and 3 bns to Steinau.

On June 12 and 13, Prince Xavier advanced to Aufenau near Salmünster.

By June 24, the Broglie's Army was deployed as follows:

In the night of June 25 to 26, Ferdinand's Army retreated to Ziegenhain.

Broglie now intended to cut Ferdinand's communication with Lippstadt. Both armies then remained inactive for a few days, though not two hours' march apart, neither daring to attack the other, and each waiting for the other to make the next movement. Meanwhile Spörcken was at Lünen with the Allied Army of Westphalia to observe Saint-Germain's Corps still encamped at Dortmund.

In the night of June 29 to 30, the Allied garrison of Marburg surrendered to M. de Chabo at the head of the Irish brigade. The 380 men of the garrison and their commander, Major Puffendorf became prisoners of war. French forces were sent to lay siege to Dillenburg already blockaded since a few days.

On July 2, the 88th Campbell's Highlanders along with 300 recruits for the 87th Keith's Highlanders, arriving from Great Britain, joined the Allied army.

Broglie detached other smaller detachments towards Haina and Jesberg.

In the night of July 3 to 4, the Allies began building entrenchments on the heights between Wasenberg and Schwalm overlooking Ziegenhain and occupied them with 5 bns. 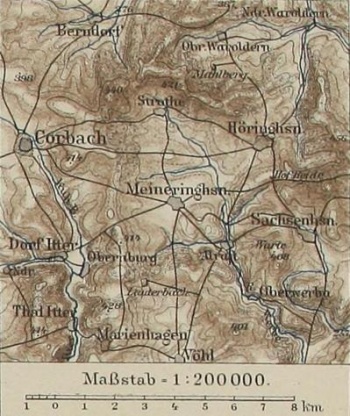 Map of the surroundings of Korbach.

This series of articles is a compilation of texts from the following books which are now in the public domain: