On July 29, 1762, Lieutenant-General von Seydlitz resolved to advance from his camp at Zwickau in Saxony towards Bohemia with a force of 2 bns and more than 18 sqns. He was followed by a detachment ()3 bns, 5 sqns) under Lieutenant-General Kanitz, which also belonged to Seydlitz's Corps.

On July 30, another Prussian detachment (5 bns, 18 sqns) under Major-General Kleist departed from Berthelsdorf and marched by Chemnitz to make a junction with Seydlitz

On his way, Seydlitz's Corps was joined by a force (4 bns 18 sqns and some light troops) under the command of General Kleist.

On August 1, Kanitz arrived at Sebastiansberg (present-day Hora Svatého Šebestiána) while Seydlitz reached Komotau (present-day Chomutov). Torrock's Austrian Corps retired, constantly keeping contact with the advancing Prussian forces. The same day, Kleist's detachment made a junction with Seydlitz at Johnsdorf (probably present-day Janov). The united Prussian corps then advanced up to Dux (present-day Duchcov), where they encamped. The Kleist Jägers along with Kleist Green Croats took positions in the Abbey of Ossegg (present-day Osek) while Kanitz reached Brüx (present-day Most). 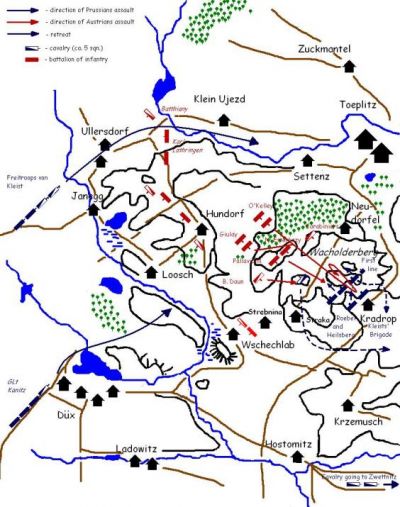 Overview of the manoeuvres before the combat of Teplitz on August 2, 1762. 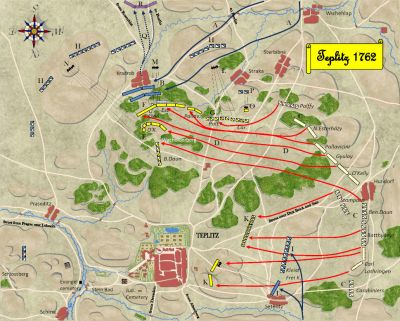 The battlefield presented various types of terrain. The neighbourhood of Teplitz consisted mainly of lowland. A range of hills extended to the south with the largest one, the Walchodeberg, located near the village of Kradrob (present-day Kladruby u Teplic). Some other lower hills were located in the vicinity of Strebnina and Straka. There were also two ponds near the village of Hundorf, the largest one to the south near the town of Dux and the second between Hundorf and Janegg. A long hill extended to the north of Teplitz while several ponds between Janegg and Klein-Ujezd made the approach quite difficult.

The Austrian corps of Löwenstein was deployed in strong positions near the village of Hundorf. Its front was covered by ponds and marshes. Löwenstein extended his right wing up to Klein-Ujezd to prevent Seydlitz from cutting his line of communication with Serbelloni. The Austrian left wing was deployed between Hundorf and Galgenbusch near Strebnina. Furthermore, small detachments of cavalry and infantry had taken position at Wschechlab. Baggage had been sent to Aussig. However, the Wacholderberg near the village of Kradrob was not occupied by any Austrian unit and Seydlitz decided to attack this position on August 2 in the morning.

On August 1 at 10:00 PM, the Prussians regrouped for the assault. Their main column marched to Neuhof and Preschen with Belling Hussars (5 sqns) forming the vanguard followed by the infantry and with the rest of the cavalry as rearguard. Kleist Green Croats and Kleist Jägers along with a detachment of hussars were sent to Ossegg in front of the Austrian right wing formed by Carl Lothringen Infantry and Batthyányi Dragoons. Lieutenant-General Kanitz, with 3 bns and 5 sqns, marched by Liptitz in direction of the Austrian centre.

The whole corps then set out again in the night, and marched by way of Soberscher, towards Kradrob, where they remained still until daybreak to make reconnaissance of the Austrian positions. Seydlitz and Kleist could not come to an agreement on the general plan of attack. Seydlitz had the last word.

During the night of August 1 to 2, Prince Löwenstein, having no light cavalry, sent a party of cuirassiers to patrol. They accidentally bumped into Prussian hussars> in the ensuing skirmish, the Prussians captured 164 Austrians and 4 officers.

As his patrol was not coming back to report, Löwenstein became worried of the movements of the Prussian. He remained in his position and sent a courier to FZM Maquire, asking him for reinforcements. Maquire sent him 3 bns.

On August 2 at sunrise, Belling Hussars (5 sqns) made themselves master of the Wachloderberg and Kleist's detachment (about 2,000 men and officers) marched in two line to the assault:

The rest of the Prussian cavalry advanced to Zwettnitz to attack the rear of the Austrian positions.

Löwenstein deployed his remaining squadrons and his batteries to the southwest of the Wacholderberg. Meanwhile, the Prussian cavalry deployed south of Kradrob to guard the line of retreat.

Meanwhile, on the other flank, light troops of Freikorps von Kleist (1 bn, 8 sqns) had advanced from Settenz and attacked the Austrians deployed on the western outskirt of the town of Teplitz. They were opposed by Carl Lothringen Infantry along with 10 sqns under the command of Lieutenant-General von Stampach. Difficult terrain and insufficient troops did not allow the Prussians to exploit their successful manoeuvre.

When Kleist's detachment finally arrived in front of the Wacholderberg, it was too late to prevent its occupation by the Austrians. Nevertheless, this detachment engaged the Austrian infantry in close combat but the latter soon took advantage. The first line of the Prussians was broken and forced to retire. Pallavicini's troops pursued them but were stopped by the second line.

However, Grenadier Battalion Heilsberg and Röbel Fusiliers, belonging to Kleist's detachment, managed to turn the flank of Pallavicini's Brigade and to march on the Wacholderberg.

Suddenly, Gyulay Infantry and O'Kelly Infantry appeared. They outnumbered the advancing Prussians more than 2 to 1. They finally pushed back Kleist second line. Pallavicini was in no position to launch a counter-attack and Grenadier Battalion Heilsberg and Röbel Fusiliers retreated in good order to Kradrob, covered by the fire of the Prussian artillery planted on a hill southwest of Kradrob.

The Prussians were also moving some pieces from their battery near Straka to reinforce the battery established to the southwest of Kradrob. With these additional pieces, a new battery was planted east of Kradrob.

As soon as Löwenstein became aware of this, he posted a detachment of Carl Lothringen Infantry along with 2 cannon on a hill north of Straka, which cannonaded the Prussian cavalry deployed in front of the village of Straka.

During this time, the Prussian infantry rallied south of the village Kradrob.

Musket fire lasted till 7:00 a.m.. Seydlitz then realised that he could not continue his attack. Indeed, Löwenstein had had enough time to prepare for the defence of the Wacholderberg. Furthermore, Prussian ammunition were running out, an ammunition wagon had been destroyed by an Austrian shot. This made a terrifying impression upon Seydlitz' troops. When Löwenstein's artillery set fire to the village, the Prussians retired southwards.

During the afternoon, the Prussians retired to Oberleutensdorf where they remained until August 3. Prussian dragoons covered this position, standing between Obersleutmansdorf and Ossegg.