During the siege of Schweidnitz (present-day Swidnica) in 1762, to break the encirclement of the fortress, Marshal Daun ordered to attack the contravallation line drawn around it and defending the Prussian camp against an assault by the Austrian relief army. The point chosen for the attack was Reichenbach on the heights of Kesselberg and Stein-Seifersdorf.

On Monday August 16 at daybreak, Lacy and Brentano marched towards the heights of Kleitsch to make a junction with Beck's Corps.

At 10:00 a.m., Lacy and Brentano appeared in great force on the western side of the Fischerberg and deployed within cannon-shot of Bevern about the three villages of Peilau (Ober Peilau, Nieder Peilau and Mittel Peilau), to the south of Reichenbach. Daun lay with most of his army in the gorges of the mountains behind Lacy's positions. Daun planned to push through upon Koltschen as soon as Lacy had cleared the Fischerberg.

Lacy, after reconnoitring a little, spread his tents at Lang-Bielau and his troops proceeded to cooking their dinner to induce the Prussians to believe that they would not endeavour any action. Frederick II then considered that the Austrian would not attack till the next day.

Then, at 3:00 p.m., the Austrian generals started to deploy their respective corps:

By 5:00 p.m., Lacy had deployed in a long strong line before the villages of Peilau, on the western side of the Fischerberg. Meanwhile, Beck pushed round by woods to take the Fischerberg on the eastern side. 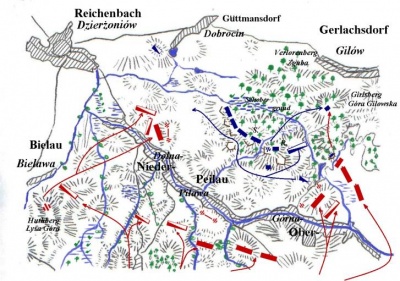 Sketch of the situation around 5:00 p.m. at Reichenbach – Copyright Tomasz Karpiński 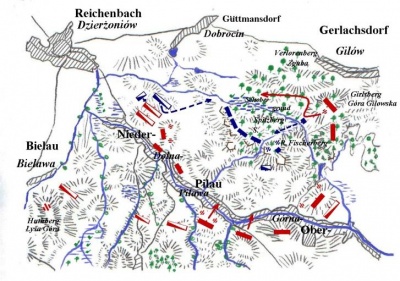 Sketch of the situation around 6:00 p.m. at Reichenbach – Copyright Tomasz Karpiński 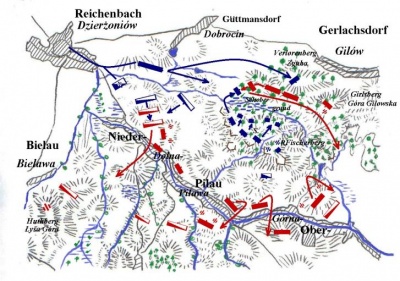 Sketch of the situation around 7:00 p.m. at Reichenbach – Copyright Tomasz Karpiński

The Austrians approached the Prussian trenches in 3 columns.

As soon as O'Donell's Cavalry debouched from Mittel Peilau, the Prussian General Lentulus moved through the wood behind the infantry with 18 squadrons to attack him.

At 6:00 p.m., the Prussian cavalry stationed at Peterswaldau arrived at the gallop on the battlefield. It was accompanied by Lieutenant von Anhalt's battery of Horse Artillery. Hussars and Bosniaken in the van, the duke's cavalry traversed Ernsdorf, advancing towards Reichenbach. The horse artillery left the column, heading to the East of the village of Reichenbach, in front of the houses along the Chaussée. The lively fire of the Austrians initially repulsed these 25 squadrons, forcing them to leave their position and to take refuge behind their own infantry.

Meanwhile the six 6-pdrs of the Prussian battery of Horse Artillery had been detached from their carriage and the ammunition wagons disposed close at hand. Very soon, the battery opened a lively and precise fire on the Austrian cavalry which was deployed to the north of Nieder Peilau.

The infantry of Lacy and Brentano and the first line of Beck's infantry remained idle during the terrible artillery duel. Meanwhile, Beck at the head of his second line moved through the bushes of Girlsdorf and took possession of the neighbouring heights. He then placed a battalion on these heights with guns to cannonade the Fischersberg and sent his grenadiers ahead to attack the Fischerberg.

On the Prussian right wing, the Austrian cavalry, visible on the horizon, constituted a wonderful target for the Prussian artillerymen who quickly adjusted their guns, aiming them on the enemy squadrons and killing entire groups of men and horses. Under the cover of the Horse Artillery battery, Colonel von Lossow deployed his light cavalry in line between Reichenbach and the outworks at Herrn:

At 6:30 p.m., Lossow's Division forded the Huhn Bach and fell on the left flank of the Austrian cavalry and routed them after capturing 5 standards (Archenholz mentions that 1,500 Austrians were captured during this action but the figure appears quite high compared to the reported losses). The Austrian cavalry retired to the outskirts of Nieder Peilau which was occupied by swarms of Grenzer light troops. They galloped in and around the village while other Austrian cuirasssier units poured in.

Another attack was launched from the Fischerberg by Dingelstedt Hussars (3 sqns), Herzog von Württemberg Dragoons and Flanß Dragoons on the right flank of the Austrian cavalry. While the two extremities of the Austrian line were thus mauled, the bulk of the Prussian heavy cavalry was rushing at full pace towards Reichenbach, King Frederick himself followed them with 9 battalions.

While the cavalry battle raged, the trenches of the contravallation continued to be under attack by Beck's Austrian infantry. Beck's grenadiers marched through a marshy ground and were repulsed by the Prussian artillery.

By 7:00 p.m., Beck had managed to disentangle his corps from the woods and to enter the plain behind the Prussians. When Beck appeared in the plain, all other Austrian corps advanced.

The Duke von Bevern at the head of 2 battalions attacked the heads of the columns debouching from the marshy woods, pushing them back.

Because of the large extension of this contravallation, Austrian troops managed to penetrate it at several places: some redoubt were surrounded, especially those held by the Grenadier Battalion 28/32 Schätzel who maintained its position, engaging in a duel of musketry in front and back. They resisted until the attackers were ordered to retire.

Indeed shortly after 7:00 p.m., Marshal Daun, who had reluctantly initiated the action, had suspended the attack and ordered his troops to retire when he had heard of the arrival of Prussian reinforcements. Indeed, 15 Prussian squadrons detached by Frederick to support Bevern had arrived on the left and attacked and broke the Austrian cavalry near Nieder Peilau. The Austrian cavalry managed to rally but was immediately charged by another Prussian cavalry corps under Lentulus who pushed it back on the Austrian infantry at Nieder Peilau.

Finally, after sunset, General Mollendorf appeared with 6 Prussian battalions. The Austrian generals realising that their attempt had failed retired to their camp at Habendorf.

The night of the battle, the Prussian cavalry bivouacked to the East of Reichenbach.

The tardy involvement of Lacy's and Brentano's Corps cannot be excused. It exposed Beck's Corps to the danger of total capture or annihilation.

During the night of August 18, the Austrian relief army retreated to the Silberberg and the Wartha, abandoning the garrison to its fate.

The Battle of Reichenbach remains a wonderful example of what can accomplish a well led force of cavalry, even if it is not too numerous, against superior forces if supported appropriately by horse artillery. The larger Austrian cavalry was charged on both flanks while advancing and was not able to make a conversion to face the attacks. However, the Prussian cavalry was an elite force which had been much less depleted by losses over the years. Its recruits consisted of the best available elements and were rapidly trained by occupying outposts and reconnoitring enemy positions.

N.B.: for a general overview of the Prussian forces present around Schweidnitz the day of the battle, please see the order of battle of October 14 in the article 1762 - Siege of Schweidnitz.

A few paragraphs are excerpts from the following books which are now in the public domain:

Duffy, Christopher, By the Force of Arms, Vol. II of "The Austrian Army in the Seven Years War", The Emperor Press, Chicago 2008.

Carlo Bessolo for the initial version of this article

Tomasz Karpiński from Poznań in Poland for all maps, battle losses and for additional information about this battle