During the campaign of 1762 in Western Germany, after its defeat in the Battle of Wilhelmsthal on June 24, 1762, the main French army (the Army of the Upper Rhine) under the Prince de Soubise and the Maréchal d’Estrées had withdrawn to Göttingen, recalling the Saxon corps of Prince Xavier to Lutterberg to guard the passage of the Fulda. Duke Ferdinand of Brunswick then cut off their line of communication with Frankfurt and captured and destroyed the French magazines in Rotenburg. The supply situation of the French Army of the Upper Rhine was gradually worsening (lack of forage, insecurity of the connections). The two French generals now relied on the Army of the Lower Rhine of the Prince de Condé to make a junction with their own army.

On July 23, the Army of the Lower Rhine marched from Westphalia towards the Lahn River by way of the Westerwald, its march was covered by Conflans’s Corps, which was posted on the heights of Ruthen. The same day, the Allies defeated the corps of Prince Xavier in the Combat of Lutterberg, forcing it to retire to Crumbach. 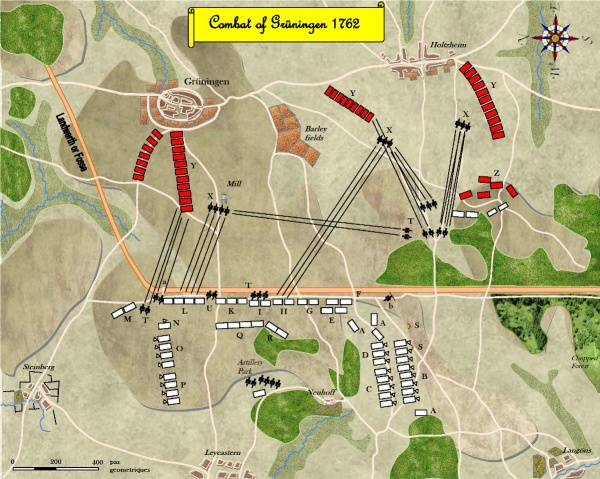 Map of the Engagement of Grüningen
Courtesy: Dinos Antoniadis
Key to the map:

N.B.: the “Landwehr”, aka “Pfahlgraben”, aka Course of the Limes, is largely leveled up today and overgrown with hedges.

The Hereditary Prince divided his corps into three columns, subordinated them to Lieutenant-Generals Hardenberg, Oheimb and Bock.

On August 24 at 8:00 a.m., the Hereditary Prince left the baggage of his corps near Grünberg under a small guard and set out with his troops for Lich. He personally joined Luckner’s Corps, which formed his vanguard.

When Luckner and the Hereditary Prince reached the heights near the Monastery of Arnsburg, they could see tents for about 10 bns on a hill between Grüningen and the Forest of Holzheim.

The Hereditary Prince crossed the Wetter with his three columns and Luckner’s Corps near Lich, Arnsburg, Muschenheim and upstream of Muschenheim and marched in the direction of Eberstadt, where he deployed his corps for the attack.

The Allies were able to drive back the outposts of French light troops and partly push them away in the direction of Butzbach, but the darkness put an end to the engagement.

The Hereditary Prince's troops spent the night under arms between Holzheim and the village of Dorf-Güll. The Allied light troops and the Volontaires de Wurmser remained in contact throughout the night.

During the night, Condé evacuated his camp, leaving part of his tents and baggage near Grüningen, and deployed in an excellent position on the heights behind the still existing Wetterau Limes (“Pfahlgraben”, “Landwehr”), north of Grüningen. He reinforced the Limes wall on a broad front with heavy artillery (brought from Gießen) with which he now dominated the entire area. The entire French army was deployed with its right wing at the Ludwigshöhe hill, and its left wing at the northern end of the limes. In the Lang-Gönser woods on the French right wing abatis had been set up.

On August 25 in the morning, a detachment of Allied grenadiers occupied Grüningen, but did not find the French in their previous positions. The Allied light troops then searched in all directions, believing that Condé had once more withdrawn. Since his light troops had reported the French marching off to Wetzlar, the Hereditary Prince believed that he was only dealing with Condé’s rearguard and decided to immediately attack them.

Around 9:00 a.m., unsuspecting that the whole Army of the Lower Rhine was before him, the Hereditary Prince sent his vanguard (7 bns and 6 x 6-pdr guns) under Lieutenant-General Hardenberg forward against the French position on the southern slope of the Ober-Steinberg. This vanguard formed in four columns and advanced:

As the he columns of the Allied vanguard reached the crest of the hill, advancing towards the windmill, they were caught in such violent artillery fire ("lively cannonade"). The Allies could only reply with a few 6-pdr guns, which had meanwhile reached the height. This artillery fire not only very quickly put an end to the advance of the Allied vanguard, but also dismounted three of the six Hessian 6-pdr guns that had been positioned near the windmill, with almost all of their crews and horses killed.

Only now did the Hereditary Prince realize that the entire French Army of the Lower Rhine was standing in front of his corps and that there was no question of their withdrawal. Under these circumstances an attack could only be successful with high losses and the French could then still retreat under the cannons of the fortified town of Giessen 5 km away, where 8 bns were standing to cover the French connection with the Main River. Considering the situation, the Hereditary Prince decided to disengage.

The Hereditary Prince gave orders to Lieutenant-General Hardenberg to retreat to the heights of Eberstadt, where the rest of his army had taken position. The rightmost column of the Allied vanguard, which had already marched beyond Grüningen, initially led out the retreat.

To cover the retreat of his vanguard, the Hereditary Prince formed part of his army south of Grüningen, while his quickly brought up artillery opened against the French batteries. Under this protection, the other columns of the vanguard managed to retire, bringing with them the three remaining 6-pdrs. Like the rightmost column, they joined the army.

At 11:00 a.m., the army of the Hereditary Prince, formed in three lines, retired drum beating by way of Eberstadt to its former camp on the heights of Muschenheim. This camp had the village of Muschenheim in front of its left wing and the Monastery of Arnsburg in front of its right wing. During the retreat, Allied troops occupied Eberstadt and the surrounding heights. Some French dragoons followed the Allies during their retreat.

In this engagement, the Hereditary Prince's Army had lost 150 men (only 50 to 60 according to Renouard) and 3 six-pdr Hessian cannon. Captain Eitel and Lieutenant Hansen of the Hessian artillery and Lieutenant Amelung had been killed; and Lieutenant Danz, mortally wounded. The losses of Luckner's Corps are not recorded.

On August 26, the Hereditary Prince returned to his abandoned camp at Grünberg, while Luckner took position at Wetterfeld near Laubach and Condé moved on towards Friedberg.

The engagement at Grüningen was by itself of little importance. The Hereditary Prince of Brunswick had not achieved his goal of decisively defeating Condé before he could join the Army of the Upper Rhine. However, despite its victory, Condé’s Army withdrew to the Nauheim area.

In front of the right wing near Holtzheim:

Units listed from right to left according to the map.