On October 19 1659, after Cromwell's death and the reinstatement of the Parliament, Monck, who was commander-in-chief in Scotland, mustered his regiment and Morgan's Foot in Edinburgh. He then told his officers that he was resolved to make military power subordinate to the Parliament. Officers and soldiers unanimously declared they would live and die with him. He also announced his intentions to Wilkes' Foot, stationed in Leith. On October 21, Monck marched to Lithgowe with some troops of horse and a few companies of foot. On October 22, he returned to Edinburgh. On December 8, Monck's Army assembled at Coldstream on the Tweed. From then on, his regiment was almost always designated as the "Coldstream Regiment". On January 1 1660, Monck set off from Coldstream at the head of his army (including his own regiment), marching towards London by Newcastle, Leicester, Harborough, Northampton, Dunstable, St. Albans and Barnet. On 3 February, Monck triumphantly entered London. Upon its arrival in London, the regiment repressed anarchy, enforced due obedience to the laws and secured the respect for the civil government. On February 24, Monck was constituted Captain-General under the Parliament. On April 9, Lambert escaped from the Tower of London but companies of the regiment pursued him and defeated his supporters at Daventry. On April 22, it brought Lambert back to the Tower of London. On May 8, with the support of Monck and of the Parliament, Charles II was proclaimed king in London. On May 28, Monck's regiment encamped at Blackheath with the rest of the army, in readiness to receive the King. For his role in the Restoration, Monck received the title of Earl of Albemarle. In August, orders were given to disband all former regiments of the English Army with the exception of Monck's regiment, now known as the “Lord General's Own Regiment” or “Duke of Albemarle's Regiment of Foot”. On January 11 1661, the King resolved to constitute this regiment his household troops along with the newly created King's Regiment of Guards. On February 14, the regiment was symbolically disbanded in relation to the kingdom's pay and immediately taken in the king's service as guards. From then, it was known as the “Lord General's Regiment of Foot Guards”.

After Monck's death, in January 1670, William Earl of Craven became colonel of the regiment. From this period, the regiment became better known as the “Coldstream Regiment of Foot Guards”. In February, a detachment of the regiment (1 officer, 1 sergeant, 1 corporal and 50 men) embarked to reinforce the ships sent in the Mediterranean to check the depredations committed by the Algerian pirates. The squadron returned in November.

At the end of July 1680, a detachment of the regiment (1 captain, 1 ensign, 4 sergeants and 120 privates) was sent to the relief of Tangiers. They were converged with other contingents to form the so called “King's Battalion” who sailed from Portsmouth. Meanwhile, 2 companies of the regiment went to Oxford to attend the King. In April 1684, the detachment previously sent to Tangiers returned home. The same month, a second grenadier company was added to the regiment. In September, the uniform of the regiment is described as follows:

By the time of the coronation of King James II in 1685, the regiment consisted of 12 companies and one company of grenadiers. The same year, one battalion of the regiment saw active service during the Monmouth Rebellion and, on July 6, fought at the Battle of Sedgemoor. In July, the regiment was twice reduced first from 100 to 80 men and then to 60 men per company. On May 21 1686, the regiment was provided with bayonets for the first time; previously only the grenadiers had them.

From September 1 1688, four companies were to the regiment: 3 musketeer companies and 1 grenadier companies. On November 5, the Prince of Orange landed at Torbay and marched with his Dutch regiments to Exeter. In December, prior to his entry into London, the Prince of Orange sent orders for all the King's forces in and about the capital to march out, with the exception of the Coldstream Guards. On December 19, the regiment was drawn up in Moor-fields and received orders to march for Rochester, Maidstone and Dover. On the accession of William III, the regiment was taken from Lord Craven and bestowed to Thomas Talmash.

In March 1689, according to its treaty with the Dutch Republic, England got involved in the Nine Years' War (1688–97). The two battalions of the regiment embarked for Helvoet Sluys. In may the regiment was reduced from 17 to 14 companies (2 companies were transferred to the 1st Foot Guards and the third was disbanded). At the end of the year, a battalion of 7 companies was raised for home duty and only one battalion remained on the establishment in Flanders. At the end of May, the regiment, commanded by Colonel Bridgeman, and some other regiments from England assembled on the Sambre, under Marlborough. On August 25, the first battalion of the regiment took part in an engagement at Walcourt. It later took its winter-quarters in Ghent. In July 1690, the battalion was posted in Bruxelles. In May 1691, the first battalion left its cantonments and joined the Allied army assembling at Anderlecht. On August 3 1692, the battalion took part in the Battle of Steenkerque. It was then attached to a force sent to Bruges and later formed part of the garrison of Dixmude. At the beginning of 1693, the Allies evacuated Dixmude. In May, they assembled at Dieghem, between Bruxelles and Louvain. On July 29, the first battalion fought in the Battle of Landen. In September, it was part of a force placed, under the command of the Elector of Bavaria, who marched to Saint-Quentin Linneck but was soon recalled to Ninove. The battalion took its winter-quarters in Ghent. In May 1694, it rejoined the army assembling near Louvain. In June the Brigade of Guards encamped at Valeduc to cover the king's quarters. In October, the whole of the heavy artillery was forwarded to Ghent in charge of the first battalion of the regiment. On June 18 of the same year, a detachment of the home battalion (4 officers, 4 sergeants, 6 corporals, 3 drummers and 138 privates) took part in an unsuccessful landing in Camaret Bay where Lieutenant-General Talmash was mortally wounded. Lord Cutts was then appointed colonel of the Coldstream Guards. In July 1695, the first battalion was part of Cutts' Brigade who contributed to the siege of Namur. In March 1696, William III fearing a French invasion recalled several units, including the first battalion of the regiment to England. However, this force was soon sent back to Flanders and, by April, was back in Ghent. On June 2, it marched to Wavre where an army was assembling. It later took its winter-quarters at Ghent. Early in April 1697, the first battalion was part of William's Army of Brabant who encamped between Deynse and Nivelle. In October, after the signature of the Treaty of Ryswick, the battalion embarked for England.

At the end of March 1713, the two battalions of Guards who had served in the Low Countries returned to London.

During the War of the Austrian Succession, the regiment served in Flanders and took part in the battles of Dettingen (June 27 1743) and Fontenoy (May 11 1745).

In May 1758, the first battalion was sent to the Isle of Wight in preparation for a raid on the French Coasts. It then embarked on the fleet and took part in the expedition from June 1 to July 1. It also participated in a second expedition on the French Coasts from August to September of the same year. On August 7, the first battalion of the regiment landed in the Bay of Saint-Marais near Cherbourg and gained possession of the rising ground in front of its position. On September 10, during the retreat of the British army to reach its point of embarkment after the failed attempt against Saint-Malo, the battalion took possession of the ground to the right of the village of Saint-Cast, near the windmill. During the night, it captured 2 small batteries and destroyed them. On September 11, it suffered heavy losses during the re-embarkment at Saint-Cast.

In the Summer of 1760, the 2nd Battalion was sent to Germany to reinforce the Allied army of Ferdinand of Brunswick. On August 25, it arrived at Ferdinand's headquarters near Bühne. It was immediately integrated into Ferdinand's Reserve deployed along the Diemel.

In 1762, the 2nd Battalion was part of Granby's Corps in Germany. On June 24, it took part in the Battle of Wilhelmsthal. The corps fought stubbornly against the flower of the French infantry until Ferdinand managed to turn the rear of the French position with additional troops. A French corps was nearly annihilated. On September 21, the battalion took part in the Combat of Amöneburg. Late in the afternoon, the British Corps came to the relief of the Hanoverians guarding the bridge and repulsed several French attacks, saving the day for the Allies.

The front or forepart of the drums were painted blue, with the royal arms. Another part wore the “Garter Star” which was the badge of the regiment.

The 2nd Foot Guards carried three crimson colours: the colonel's, the lieutenant-colonel's and the major's. Finally, each of its 15 companies carried a company colours in the form of the Union flag with differing devices.

Colonel's Colour: crimson field; centre device consisting of a star of the Order of the Garter surmounted by a crown (yellow with red cushions, white pearls and ermine headband).

Lieutenant-Colonel's Colour: crimson field; centre device consisting of a star of the Order of the Garter surmounted by a crown (yellow with red cushions, white pearls and ermine headband). The Union in the upper left corner.

Major's Colour: crimson field; centre device consisting of a star of the Order of the Garter surmounted by a crown (yellow with red cushions, white pearls and ermine headband). The Union in the upper left corner; a golden flame emerging from the Union. 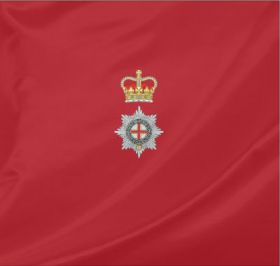 Colours of the 15 companies:

This article is mostly and abridged version of the following book which is in the public domain: