In 1666, during the Scottish Covenanters Wars, the regiment took part in the Battle of Rullion Green in the Pentland Hills. In 1679, it took part in the defence of Glasgow. On June 22, at the Battle of Bothwell Bridge, it was charged with the attack upon the bridge which they carried, thus deciding the result of the battle. The regiment then assumed garrison duties at the Bass Rock and guarded the coast of Fife against the Dutch.

In 1682, grenadiers were added to the regiment.

In 1686, the “Scottish Regiment of Foot Guards” was placed on to the establishment of the English Army. In April, seven companies of the regiment embarked at Leith and sailed to Gravesend . They then marched to the training camp on Hounslow Heath where they joined the [1st Foot Guards]] and the 2nd Foot Guards. At the end of the year, they sailed back to Scotland.

In 1688, as James II feared an invasion of England by the Prince of Orange (future King William III), he assembled in London the whole reliable forces of the kingdom. Accordingly, the “Scottish Regiment of Foot Guards”, under its colonel, Lieutenant-General Douglas, marched with the Scottish army southward. At the end of October, the regiment, then counting 1,251 men, arrived in London where it was quartered in the vicinity of Holborn. It then followed the Royal Army to Reading where a battalion deserted to the Prince of Orange. After the flight of the king and the establishment of the House of Orange under William and Mary, in 1689, the regiment was reunited under the name of “Scots Fusilier” or “3rd Regiment of Guards”. The regiment now consisted of 14 companies, including a grenadier company.

At the beginning of the War of the Spanish Succession, the regiment assumed garrison duties in Scotland. In 1704, it was increased to 18 companies. One of these companies was appointed for the security of the Highlands. This Highland Company (disbanded in 1714) consisted of 1 captain, 2 lieutenants, 2 sergeants, 2 corporals, 1 piper and 50 men and was clothed as Highlanders and armed with broadswords, targets, guns, pistols and dirks. In 1709, the first battalion was sent to Spain. On 20 August 1710, this battalion took part in the Battle of Saragossa. On 8 December, it fought in the Combat of Brihuega, where the entire British contingent was surrounded and forced to surrender. In 1712, Queen Anne renamed the regiment as the “Third Regiment of Foot Guards” and attributed a badge to each of the 16 companies:

In 1715, the regiment assumed garrison duties in Portsmouth and Plymouth.

In May 1758, the 1st battalion was sent to the Isle of Wight in preparation for a raid on the French Coasts. It then embarked on the fleet and took part to the expedition from June 1 to July 1. It also participated in a second expedition on the French Coasts from August to September of the same year. On August 7, this battalion landed in the Bay of Saint-Marais near Cherbourg and gained possession of the rising ground in front of its position. On September 11, after the failed attempt against Saint-Malo, it suffered heavy losses during the re-embarkment at Saint-Cast.

In the Summer of 1760, the 2nd Battalion was sent to Germany to reinforce the Allied Army of Ferdinand of Brunswick. On August 25, it arrived at Ferdinand's headquarters near Bühne. It was immediately integrated into Ferdinand's Reserve deployed along the Diemel.

In 1762, the 2nd Battalion was part of Granby's Corps in Germany. On June 24, it took part in the Battle of Wilhelmsthal. The corps fought stubbornly against the flower of the French infantry until Ferdinand managed to turn the rear of the French position with additional troops. A French corps was nearly annihilated. On September 21, the battalion took part in the Combat of Amöneburg. Late in the afternoon, the British Corps came to the relief of the Hanoverians guarding the bridge and repulsed several French attacks, saving the day for the Allies. The battalion suffered more heavily than any other unit engaged.

The front or forepart of the drums were painted blue, with the royal arms.

The 3rd Foot Guards carried three crimson colours: the colonel's, the lieutenant-colonel's and the major's. Finally, each of its 13 companies carried a company colours in the form of the Union flag with differing devices.

Lieutenant-Colonel's Colour: crimson field; centre device consisting of a rose and thistle on the same stalk, surmounted by a crown (yellow with red cushions, white pearls and ermine headband), with a golden scroll carrying the motto “Unita Fortior” beneath the centre device. The Union in the upper left corner.

Major's Colour: crimson field; centre device consisting of a star of the Order of the Thistle (silver with St. Andrew's saltire and clusters of rays; in the centre is a green circle bearing the motto “Nemo me impune lacessit ” in gold, inside the circle is a thistle on a gold background), the whole surmounted by a crown (yellow with red cushions, white pearls and ermine headband), with a golden scroll carrying the motto “Semper Paratus” beneath the centre device.. The Union in the upper left corner; a golden flame emerging from the Union. 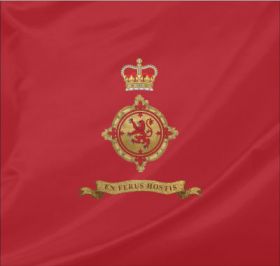 Colours of the 13 companies:

This article is mainly a condensed and abridged version of the following book which is the public domain: