This grenadier battalion was formed in 1763 from the second battalion of the Leibgrenadierregiment. It was designated as the Hausgrenadierbataillon.

The battalion was disbanded in 1767.

The regiment did not see active service during the Seven Years War. 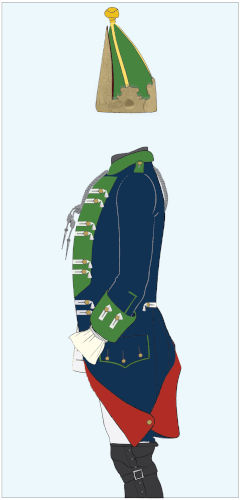 We don't know if Württemberger 'regular' Grenadier regiments had flags (converged Grenadiers regiments very probably didn't have flags). But, here, if this 'regular' regiment had flags, we suspect they could be like that :

Leibfahne would be like the one for the other regiments.

Ordinarfahne would have the same design than for the other regiments but with a grenade on each corner instead of the small crowned "mirrored C" monogram:

- on the reverse side, in the center, a gold "mirrored CE" monogram with a gold and red ducal crown. One grenade on each corner.

Ordinarfahne: carmine red field with silver fringes with, on the reverse, one grenade on each corner