In 1687, under the rule of Elector Johann Georg III, an order signed by von Bose, coming from the General Headquarters in Dresden, provided 6,000 Rixthalers from the Kriegkasse, for the education of 60 young nobles for a period of one year. The officer in charge of the first company of cadets was the Colonel Klengel.

In 1691, under the rule of Elector Johann Georg IV, von Flemming was General Field Marshal (GFM). He passed into the service of the Elector of Brandenburg, then King Friedrich I. For the high sum of 1,800 Rixthalers per months. GFM Hans Adam von Schoening succeeded him. Lieutenant-general von Schoening, the brother of GFM Adam von Schoening reorganized the Saxon Army.

In 1692, a class of Cadets was officially established for the first time. Its initial organization comprised a staff of 5 officers (Prima plana) and a class of 30 noble cadets.

In 1693 and 1694, a detachment of cadets accompanied the Saxon Army during its campaigns on the Rhine.

In 1699, the registers of the War Ministry indicated the existence of companies regrouping 124 noble cadets.

In 1725, the Militaer Akademie was established, by order of the Generalfeldmarschall, Craf von Wackerbarth, and divided into two distinct companies: the Ritter-Akademie and the Militaer-Akademie. In the summer of the same year, the whole Corps camped nearby Pillnitz.

In 1730, the Institution was renamed “Corps”. From the Kompanie zu Pferd (mounted company) originated the Grand Mousquetiers (in existence from 1730 till 1735). The same year, the Corps camped in Zeithain and paraded in front of the King of Prussia.

At the time of the Seven Years' War, the unit had the following Chefs:

Throughout its history, the unit had the following captains:

Throughout its history, the unit had the following Lieutenants-captains:

In 1756, during the Prussian invasion of Saxony, all Cadets were captured by the Prussian Army on the heights around Pirna and forced to surrender like the rest of the Saxon Army. Even if the King of Saxony asked personally to Frederick II for himself the permission to be accompanied in his exile in Poland by the young nobles he was humiliated once more. Only 8 cadets of Polish origin were left free to reach their family.

In 1695, the first uniforms of the Saxon Army were adopted. An infantry regiment of 12 coys had 12 tailors. Also the Cadets were dressed in a uniformly, receiving a red justaucorps.

In 1730, the Corps had a red uniform faced white with silver buttons and laces.

The colours remained constant and only the cut of the habit was renewed. following the fashion.

The manuscript of the Deutsches Historisches Museum (DHM) in Berlin shows two uniforms: a service dress and a Gala uniform. 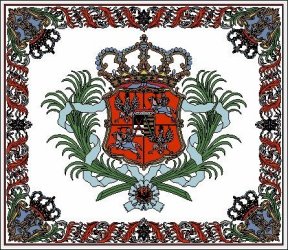 Colour of the Saxon Adeliges Kadettenkorps from 1747 to 1865 - Source: Haus Wettin in Wikipedia