Difference between revisions of "Ansbach Dragoons" 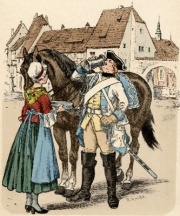 Dragoon of the Ansbach regiment in 1757. - Source: Richard Knötel Uniformkunde

From 1733 to 1738, during the War of the Polish Succession, the dragoons took part in the campaigns on the Rhine.

At the outbreak of the Seven Years' War, the District (Kreis) of Franconia supplied a dragoon regiment to the Reichsarmee. This regiment consisted of five squadrons of two companies each, for a nominal total strength of 700 men, plus nine members of the regimental staff.

Inhabers and contingents as of 1758:

During the Seven Years's War, the Chef of the regiment was the Margrave Carl Alexander von Brandenburg-Ansbach while effective command was assumed by:

Only three companies were put into the field during the Revolutionary Wars 1793 to 1801. In 1792, the regiment already had lost Brandenburg-Bayreuth and Brandenburg-Ansbach as important contributors. In 1801 it was dissolved de facto, the Prussian Hussar battalion Frankenberg having theoretically replaced it since 1792/93.

In 1757, the regiment was with the Reichsarmee operating in Thuringia and Saxony. On June 9, the regiment took part in an engagement near Vach. In August, this army combined with a French contingent under the Prince de Soubise to form the Franco-Imperial Army for the planned reconquest of Saxony. Soubise rated the various units of the Reichsarmee, considering this regiment as "poor". By August 5, the regiment counted 424 men fit for service. On November 5, at the Battle of Rossbach, it was placed in the second line of the right wing under the Prince von Hohenzollern. During this battle, the Nuremberg company G.W. Möck lost its standard.

On September 26, 1760, the regiment took part in an engagement near Torgau. On October 2, it fought in an action near Wittenberg.

On September 3, 1760, the regiment took part in an engagement near Lohma.

On June 23, 1762, the regiment fought in an action near Zwickau. From July 21 to 23, it took part in combats in the vicinity of Hof and Münchberg.

Losses during the War

Judging from reports and documents concerning battles, losses seem moderate, totalling a mere 207 men (killed in action 6, wounded 21, prisoners 164, missing 37). Extrapolating from the more differentiated, excellent Nuremberg data (with this contingent making 20 % of the regiment) one may assume for the regiment in summa: killed in action 10, dead by diseases etc. (i.e. without enemy impact) 50, prisoners 180 (95 returning on their own account), missing 85, deserters 150 (arrested 10), dismissed/invalided (mostly at the beginning of campaigns) 190. 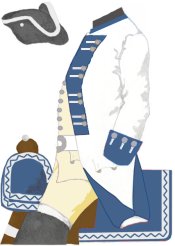 Troopers were armed with sword, a pair of pistols, a musket and a bayonet.

Officers wore uniforms similar to those of the troopers with buttonholes sewn with thread of silver and a silver aiguillette; red and black sash.

Kettle-drums made in 1710, so probably dark blue. In 1745, the coat of arms of the House of Linsingen (Inhaber from 1734 to 1737) was replaced by the cipher and arms of the Prince Brandenburg-Ansbach.

The regiment still carried the 1734 model, as no more recent standards are known to have been issued. In 1734, a full set of identical dark blue standards (Leibkompanie white) was acquired:

The dark blue ordonnance standards were fringed in silver. Their centre devices varied depending on the company:

Klaus Roider for additional information on the composition of this regiment and on its uniform.