Somewhere between August 23 and September 6, 1757, the regiment joined the Army of Saxony, led by the Prince de Soubise, in the area of Erfurt and Eisenach. On November 5, it took part in the Battle of Rossbach where it heavily suffered. It then retired into Hesse in the County of Hanau. At the end of the year, it took its winter-quarters in Lichtenau and Waldkappel to the south of Cassel in Hesse.

On April 13, 1759, the regiment took part in the Battle of Bergen where it formed the second line of the left wing under the command of the Baron de Dyherrn. On April 19, along with the Chasseurs de Fischer and other dragoons, it broke the Hanoverian Grenadiers and the Prussian Finckenstein Dragoons, taking two flags. In June, at the beginning of the French offensive in Western Germany, the regiment was part of the “Right Reserve” under the command of the Duc de Broglie who had taken position at Friedberg in Hesse. On June 26, it expelled the Allies from Debrucke. During the night of July 11 to 12, the regiment saved 400 Carabiniers who had rashly pursued the Allies driven out of Holtzhausen. On August 1, the regiment took part in the Battle of Minden where it was attached to Broglie's Corps.

In February 1761, the regiment formed part of a cavalry corps deployed between Frankfurt to Hanau. On August 15, the regiment took part in a combat near Hardehausen. On August 18, the Hereditary Prince attacked M. de Caraman (Limousin brigade, Commissaire-Général cavalry brigade, Volontaires de Flandre and the present regiment), who had taken post on the left bank of the Diemel, between Peckelsheim and Warburg. Caraman retired in good order and joined M. de Stainville on the right bank of the river. In this affair, Caraman lost 30 men and took about 30 Allied prisoners. On September 2, Stainville advanced to Grebenstein, sending the Chamborant Hussards to Westuffeln, the Volontaires de Flandre to Carlsdorf, and a detachment of the present regiment to Hofgeismar. In the night of September 18 to 19, Talaru guarded Lutterberg with 6 volunteer bns, the present regiment and 1 cavalry brigade.

In March 1762, the regiment was attached to Soubise's Army of the Upper Rhine. On April 12, M. de Maupéou, commanding in Stadtberg, was informed that an Allied force was marching on the place. He sent orders to Dauphin Dragons, Nicolaï Dragons, Auvergne Infanterie and Castellas Infanterie returning to their quarters to stop their march and to advance on Frankenberg. By July 12, the regiment was at the camp of Helsa. On June 24, it took part in the Battle of Wilhelmsthal, forming part of the left vanguard under the command of M. de Stainville. The regiment captured a battery of 3 guns and 200 grenadiers. On August 30, it distinguished itself at the Combat of Nauheim but suffered heavy losses. In December, when the French army evacuated Germany, the regiment was directed on Valenciennes. 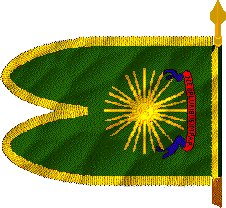