Commander-in-chief of the Russian Army in East Prussia (1757) 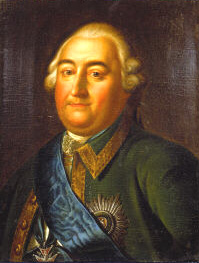 Count Apraxin served in the war against the Turks (1736-39) under the command of Münnich. By 1737, he was major in the Semyonovskiy Leib-Guard. He distinguished himself at the capture of Ochakov. In 1739, he brought to the Russian capital news about the capture of Khotin and was promoted to major-general.

In 1742, Apraxin was accepted in the Alexander Nevski Order. He later led a Russian embassy to Persia.

At the court of Saint-Petersburg, Apraxin was one of the fiercest opponent of the pro-Prussian party.

On September 20 1756, Apraxin was appointed general-in-chif of the army assembling for the planned invasion of Prussia.

At the beginning of the Seven Years' War in May 1757, as field-marshal, Apraxin led the invasion of East Prussia. On August 30, he fought the victorious Battle of Gross-Jägersdorf against the Prussian General Dohna. After his victory, Apraxin advanced to Allenburg (present-day Druzhba in Russia). East Prussia now lay wide open to a Russian invasion. Inexplicably, Apraxin did not take advantage of this opportunity and did not advance on Königsberg (Archenholz pretends that Apraxin had been ordered to fall back by chancellor Bestuzhev-Ryumin who had been bought by British gold). On September 13, Apraxin who had remained idle for a while began his retreat from East Prussia heading for Russia through Lithuania. On October 28, Apraxin was removed from command.

Elizabeth Petrovna, the Russian Empress, was extremely displeased at the retreat of her army from Prussia. She ordered an enquiry on Apraxin's conduct. The command of the Russian army was transferred to General Villim Vilimovich Fermor while Apraxin was cited before a court at Narva. The enquiry revealed that Apraxin had acted upon Chancellor Bestuzhev's instruction. The chancellor was immediately disgraced. Apraxin was indicted for having been bribed by Frederick II.

On August 17 1758, Apraxin died in captivity during his trial.