En 1758 the Marquis de Bellefonds was promoted maréchal de camp, this promotion forced him to get rid of his cavalry regiment (only foreign general officers: Swiss, German, were allowed to keep their regiment when promoted). On May 7 1758, the king gave this regiment to his parent the Duc de Chartres, and by this same ordonnance the king departed from the usual seniority rule by promoting Bellefonds Cavalerie from the 48th rank to the 21st rank, just after Orléans Cavalerie, by doing so he also shifted the rank of all regiments following the new Chartres Cavalerie.

« His Majesty has ordered and orders that the said regiment (de Chartres) will march in the future immediately after the one of Orléans and before the one of Condé, notwithstanding what is carried by the ordonnance of March 1st 1699, which had fixed the rank of this regiment, then Imécourt, after the one of Clermont, nowadays Toustain, and from which His Majesty has departed and departs in this regard only. »

When the French cavalry was reorganised on December 1 1761, the regiment was amalgamated with Trasseigny Cavalerie to form a new regiment: Chartres Cavalerie. Effective incorporation seems to have taken place only on April 1 1763 at Saint-Omer.

In 1757, the regiment joined the Lower Rhine Army commanded by maréchal d'Estrées for the planned invasion of Hanover. At the end of June, it was at the camp of Bielefeld with d'Estrées' main corps. On July 26, the regiment took part to the battle of Hastenbeck where it was among the cavalry of the right wing. After the victory, it encamped at Grosselsen near Hameln with the main body of the Lower Rhine Army from July 31 to August 2. After the Convention of Kloster-Zeven, it followed the main body, led by the maréchal de Richelieu, who encamped at Halberstadt from September 28 to November 5. The regiment was placed on the right wing of the second line. At the end of the year, it took its winter quarters in Sellingen in Ostfriese, in the fourth line of the French Army.

In April 1758, when the comte de Clermont redeployed his army along the Rhine, the regiment was stationed at Kleve, Donsbrüggen, Nütterden, Zyfflich and Niel; between Kleve and the German-Dutch border. On May 7, the regiment was renamed "Chartres". After the successful crossing of the Rhine by the Allied army of Ferdinand of Brunswick during the night of June 1 to 2, a detachment of the regiment was attacked by Allied hussars and volunteers, loosing a pair of kettle-drums and a standard. The regiment then retired towards Rheinberg where it joined Clermont's army on June 2. It remained in this camp until June 12 and was placed on the right wing of the first line. On June 23, the regiment took part in the battle of Krefeld where it was placed on the left wing of the first line, under Fitzjames. In Mid August, after Ferdinand's retreat to the east bank of the Rhine, the regiment, as part of the army of the Lower Rhine now under the marquis de Contades, recrossed the Rhine to follow the Allied army. On August 20, it was encamped near Wesel where it was placed on the left wing of the first line. At the beginning of October, the regiment was attached to Chevert's corps which was sent to reinforce the army of the prince de Soubise in Hesse. On October 10, it was at the battle of Lutterberg where it was part of Chevert's corps which won the day by turning the Allied left flank. 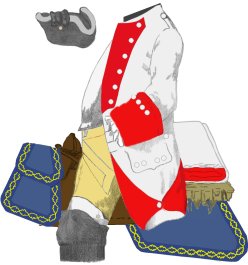 N.B.: the regiment probably changed colours when it became Chartres Cavalerie in 1758.