This Irish regiment was raised on February 27, 1698, after the Treaty of Ryswick, for James FitzJames, Duke of Berwick with the remnants of old Irish regiments.

In 1701, at the outbreak of the War of the Spanish Succession (1701-13), the regiment was initially part of the Army of the Rhine. In July, it was sent to Northern Italy where it fought in the Battle of Chiari. In 1702, it took part in the Battle of Luzzara; in 1703, in the combats of Stradella and Castelnuovo, and in the expedition in Trentino; in 1704, in the sieges of Vercelli, Ivrea and Verrua; in 1705, in the siege of Chivasso and in the Battle of Cassano; in 1706, in the unsuccessful siege of Turin and in the disastrous Battle of Turin. In 1707, the regiment operated in Spain where it fought in the battle of Almansa and participated in the sieges of Valencia and Lérida. In 1708, it was at the capture of Tortosa. From 1710 to 1712, it served with the Army of Dauphinée. In 1713, it was transferred to the Army of Catalonia. In 1714, it took part in the siege and capture of Barcelona.

By the time of the Seven Years' War, the regiment counted only 1 battalion.

During the Seven Years' War, the regiment ranked 99th and was under the command of:

By August 1, 1757, the regiment was stationed at Landerneau in Bretagne.

In 1758, the regiment defended Cherbourg.

In 1760, the regiment joined the French armies operating in Germany. By May 23, it was part of the first line of the infantry centre of Broglie's Army. By December 30, the regiment had taken its winter-quarters in Giessen. 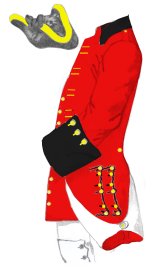