The regiment was created in 1670 for Colonel Wiedemann when war with Münster seemed likely. It was initially known as the “Graue Regiment” and soon afterwards as the “Grüne Regiment”.

In 1671, the regiment took part in the siege of Braunschweig. In 1673, it was at the camp of Leese, facing Turenne's Army which was posted at Minden. In 1674, it initially campaigned on the Rhine and then fought in the Battle of Einscheim in Alsace. In 1675, it fought in the engagement of Konzer Brücke on the Sarre near Trier. In 1676, it was at the siege of Maastricht; in 1677, at the siege of Charleroi; in 1678, at the Battle of Saint-Denis. In 1679, it returned to Hanover and marched to the relief of Hamburg, threatened by the Danes.

In 1686, the regiment (10 companies) was sent to Morea to assist the Republic of Venice against the Turks. It campaigned in the region of Argos before taking up its winter-quarters in the island of Zante (present-day Zakynthos). In 1687, it fought in an action near Patras and was at the capture of Corinth and Athens, before returning to Germany.

In 1705, during the War of the Spanish Succession (1701-13), the regiment was sent to the Netherlands. In 1706, it took part in the capture of Dendermonde; in 1708, it formed part of the army covering the long siege of Lille. In 1709, it fought in the sanguinary Battle of Malplaquet and was at the surrender of Mons. From 1710 to 1713, it took part in all campaigns, including the sieges of Béthune and Landrecies.

On July 26 1757, during the French invasion of Hanover, the regiment took part in the Battle of Hastenbeck where it was deployed in the first line of the left wing.

On May 26 1758, the regiment was with Duke Ferdinand of Brunswick's main force in the camp of Nottuln. On May 31, it accompanied Ferdinand in his offensive on the west bank of the Rhine. On June 23, the regiment took part in the Battle of Krefeld where it was deployed on the right wing, under the command of the Erbprinz (Hereditary Prince) of Brunswick. At 1:00 p.m., the Hereditary Prince led this brigade in an attack against the wood held by Saint-Germain's Division. In this battle, the regiment lost Major von Wietzendorf, killed in action; and Captain von Puffendorf, Lieutenant König and Adjutant Jordan, wounded. On October 10, the regiment fought in the Battle of Lutterberg where it was placed in the first line of the centre. In this battle, the regiment lost Ensign von Düring who was wounded.

In February 1760, the regiment took up its winter-quarters in Münster. On July 31, the regiment took part in the Battle of Warburg where it was placed in the second line of the right wing in front of Ossendorf under the command of Lieutenant-General Hardenberg. In the night of September 5 to 6, during the French offensive in Hesse, the regiment was part of an Allied detachment who passed the Diemel near Warburg and made a junction with Bülow's light troops at the village of Witzen (unidentified location), about 5 km on the other side of the Diemel. The plan called for Bülow to turn the town of Zierenberg and to take post between this town and Dierenberg (probably the village of Dörnberg or the height of Dörenberg). The Allied force, now led by the Hereditary Prince, was guided by townsmen as well as deserters who manages to avoid outposts. The regiment was posted between Malsburg and Zierenberg while the rest of the Allied force stormed Zierenberg. At 3:00 a.m., the Hereditary Prince, fearing the arrival of reinforcements from the nearby French army, ordered retreat. At 8:00 a.m., the victorious Allied column was back to Warburg. On October 16, the regiment was with the Corps of the Hereditary Prince but did not take part in the Battle of Clostercamp, being left behind near Wesel with Kielmansegg's Brigade.

By May 23 1762, during the French campaign in Western Germany, the regiment was attached to the Corps of the Hereditary Prince of Brunswick operating in Westphalia. On August 30, the regiment took part in the Combat of Nauheim where it was attached to Lieutenant-General von Hardenberg's column. Around 11:00 a.m., the regiment was part of those who passed the Wetter. After the crossing, the regiment launched two assaults on Nauheim before finally dislodging the defending French troops. The regiment then rejoined the other Allied battalions preparing for an attack against the Johannisberg. On September 21, the regiment was present at the Combat of Amöneburg where it formed part of Zastrow's Corps occupying the ground immediately before the Brücker Mühle (Zastrow commanded in the absence of Lieutenant-General Hardenberg). In this affair, the regiment lost Lieutenant Berensbach, killed; and Ensign Appuhn, wounded. The regiment then took part in the siege of Kassel where Ensign von Block was wouned. 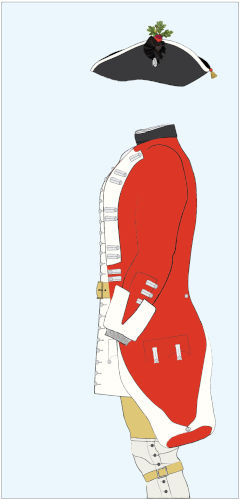 The drum pattern had hoops in alternating white and red diagonal stripes, white drum cords over a brass drum with the Arms of Hanover in the centre.

Regimental Colours: Red field. Mailed sword bearing arm emerging from grey clouds within laurel wreath. Scroll above reads RE NON VERBIS. In each corner there was a crowned "GR", the King's cypher. Hereafter, we present an illustration from the Reitzenstein Sammlung, dating from circa 1761 (left) and the interpretation of Hannoverdidi (right).