On March 1, 1668, after the first conquest of Franche-Comté, Louis XIV created the regiment of Bourgogne Infanterie. It consisted of 24 companies for a total of 2,000 men under the command of the Comte de Roussillon (former governor of Besançon for the king of Spain). Indeed, the regiment had been created for the noblemen of the recently conquered province who wanted to abandon their allegiance to Spain and to join the French Army. At its creation the regiment ranked 47th in the infantry of the French Army.

In 1669, after the death of the Comte de Roussillon, the regiment was given to the Marquis de Chamilly.

On March 6, 1672, Chamilly incorporated Saint-Léger Infanterie into his own regiment, thus inheriting the rank (46th) of this disbanded regiment and increasing his regiment to 33 companies.

In May 1672, at the outbreak of the Franco-Dutch War (1672–78), the regiment marched from Charleroi to Kayserwerth on the Rhine, then to Burich, Wesel, Groll and Deventer. In 1673, it took part in the siege of Maastricht and then garrisoned Grave. In 1674, the first battalion of the regiment distinguished itself at the defence of Grave where it was virtually annihilated. Meanwhile, the second battalion took part in the battles of Sintzheim and Ensheim. The two battalions then served in garrisons at Oudenarde (1st) and Charlemont (2nd). In August 1675, the second battalion marched to the relief of Trier. In 1676, the two battalions of the regiment took part in the siege of Condé and covered the siege of Bouchain. In 1677, the regiment participated in the sieges of Valenciennes and Cambrai, and in the Battle of Cassel; an in 1678, in the sieges of Ghent and Ypres. It then briefly garrisoned Mons before returning to Alsace.

In 1689, during the Nine Years' War (1688–97), the regiment joined the Army of the Moselle and took part in the storming of the Castle of Kockheim. In 1690, the regiment was transferred to the Meuse and took part in the Battle of Fleurus. In 1691, it first campaigned on the Rhine before being transferred to Italy where it participated in the capture of Nice, Villefranche, Montalban, Sant'Ospizio, Veillane and Carmagnola, in the relief of Susa, and in the capture of the Castle of Montmélian. In 1692, it contributed to the defence of Pinerolo and Susa. In 1693, one battalion remained in the places while the other was sent on the Rhine. In 1694, one battalion campaigned on the Rhine with Normandie Infanterie. In 1695, the two battalions were reunited in Italy. In 1696, the regiment took part in the siege of Valencia before returning to France. In 1697, it served on the Meuse, covering the siege of Ath.

A regulation dated April 10, 1715, reduced the regiment to a single battalion.

At the outbreak of the War of the Polish Succession (1733-35), the regiment was sent to the Rhine where it took part in the siege of Kehl. In 1734, it participated in the attack on the Lines of Ettlingen and in the siege of Philisbourg; and in 1735, in the Battle of Klausen.

In 1749, the regiment returned to France.

During the Seven Years' War, the regiment ranked 43rd and was commanded by:

In 1755, the regiment was sent to garrison Rochefort. From there, it went to Brest. Then, its two battalions were sent to different theaters of operation for most of the Seven Years' War. The 1st Battalion remained in Europe while the 2nd was sent to Canada.

By August 1 1757, the battalion was garrisoning Esparre in the Bordeaux country.

In 1755, the 2nd battalion (13 companies) embarked on the Dauphin Royal at Brest. On May 3, the fleet set sailed for the reinforcement of Canada. The battalion disembarked at Louisbourg where it served as garrison until the siege and capture of Louisbourg by a British army at the end of July 1758.

When the 2nd battalion returned from Canada, a battalion remained in Rochefort while the other was cantoned on the Isle of Oléron.

In the summer and autumn of 1759, a few companies of the 1st battalion of the regiment were assigned to Thurot's Squadron which was blockaded in the harbour of Dunkerque by a British squadron under the command of Commodore William Boys. In October, Boys' Squadron was driven from his station by a gale. On October 15 at 5:00 p.m., Thurot seized the opportunity, slipped out through a thick fog and made to the northward. He then sailed for Ostend, then to Göteborg in Sweden, partly to procure stores, and partly, no doubt, to baffle pursuit or observation. There he remained for 19 days, going next to Bergen in Norway. On December 5, Thurot's flotilla quitted Bergen and proceeded to the British seas, by way of Streymoy in the Faroe Islands.

On January 25 1760, Thurot's flotilla reached the neighbourhood of the Irish coast. The weather confounded an intended descent near Londonderry, and scattered his flotilla. On February 15 (or 17), Thurot's flotilla put into Claigeann Bay, in the Island of Islay in Argyleshire to refresh. They boarded and plundered two small sloops lying at anchor in the small bay of the island. The French crews then landed on the island. On February 19, Thurot left Islay. On February 20, he anchored in Belfast Lough, opposite Kilroot Point. On February 21, the detachment of the regiment took part in the attack on CarrickFergus who soon capitulated. On February 25 at 8:00 p.m., Thurot re-embarked his troops. On February 27 at 10:00 p.m., Thurot finally sailed from Carrickfergus for France. On February 28 at 4:00 a.m., 3 British frigates got sight of Thurot's flotilla as it rounded Copeland Island and gave chase. At 6:00 a.m., they caught up. At 9:00 a.m., they engaged the three French frigates. The engagement lasted about 90 minutes before the French were forced to strike theirs colours. Captains Brazide and Garcin of the regiment were wounded during this engagement. The French prisoners were brought to Ramsey on the Isle of Man then to Belfast where they arrived on March 2. On May 10, they were freed and transported to France. 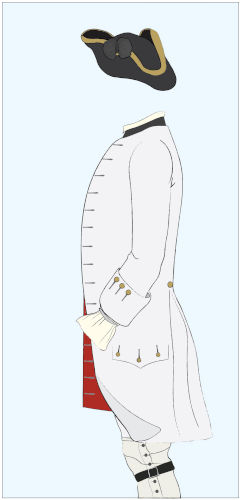 Initially, in 1755, the Ministry of the Navy supplied new uniforms to the troops sent as reinforcement to Canada. Accordingly, the 2nd Battalion was issued uniforms differing from its regulation uniform. In 1757, this battalion received uniforms more in accordance with its full regimental regulation. The Ministry of the Navy specifications for the Canadian uniform of 1755 were as follows. 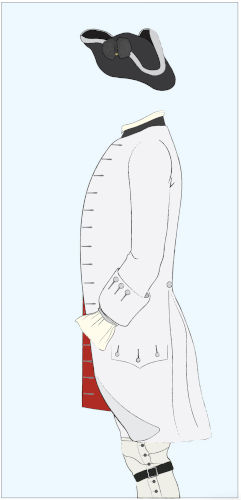 Both in the Continental and Canadian services: