The unit was raised in 1759 with British subsidies. It initially consisted of a staff of 16 men and of 2 mounted and 3 foot brigades (coys) of 99 men. One of the foot brigade was armed with rifle.

On July 10 1760, the corps took part in the Combat of Corbach where it was attached to the left column under Lieutenant-General Griffin. 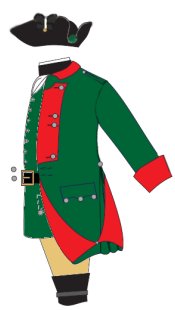 The troopers of the 1st and 3rd brigades were armed with muskets while the 2nd brigade was armed with jäger rifles.